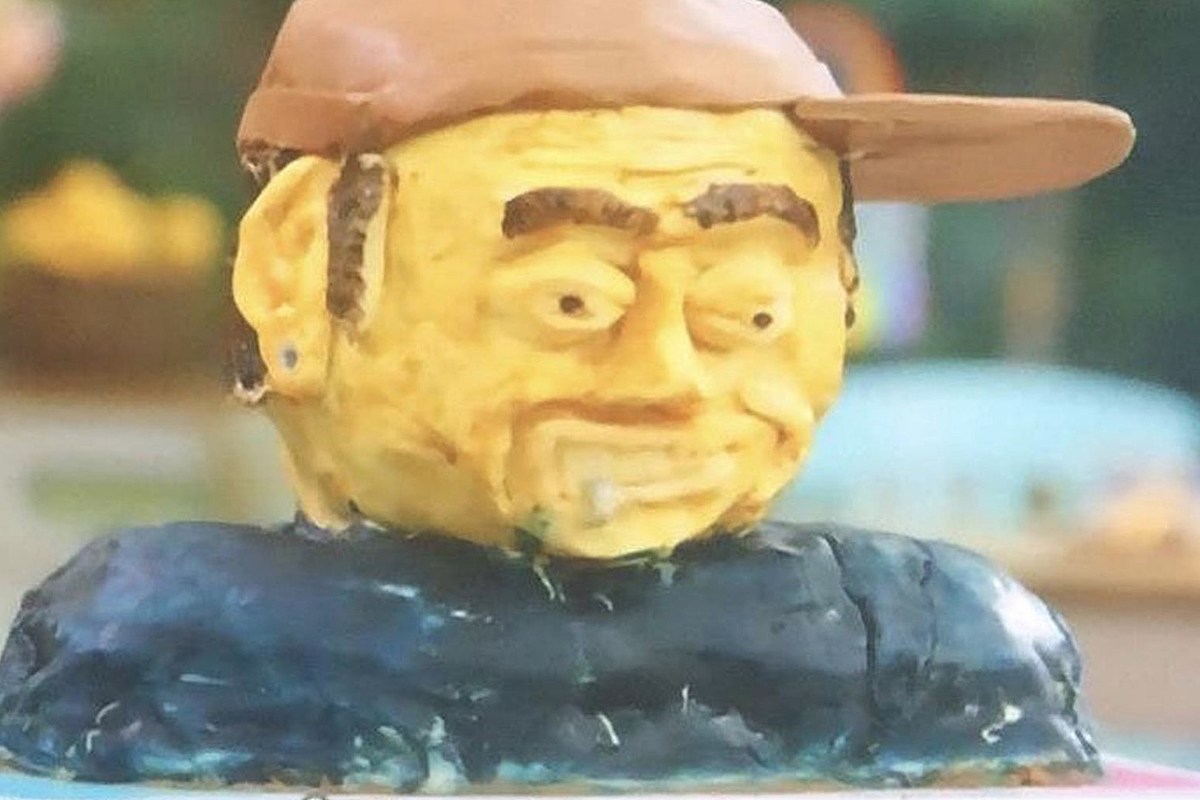 You should see how shit these homages to musicians are…

Great British Bake Off has finally returned to our screens, showcasing the best baking talent the country has to offer. Life is all about balance, though. For every mille-feuille, there’s burnt cookies. For every panna cotta, there’s a monstrous baked rendition of the lead singer of an iconic American pop-punk band.

That last one may seem unlikely, but it’s exactly what happened in the first episode when GBBO contestant Dave responded to the challenge of creating a celebrity cake bust by producing a somewhat terrifying version of the lead singer of Blink-182, Tommy DeLonge. The result looks like the Simpsons version of a sleep paralysis demon, and the other cakes baked in the round didn’t fare much better either…

Nonetheless, as it turns out there’s a worryingly long history of dodgy looking homages to musicians, immortalised in sculpture, painting, and food form. Homages that probably should have stayed in someone’s imagination. It’s important to remember that trying to recreate another person’s image, especially a world famous one, is a difficult task anyway, but you’d think lessons would have been learnt by now. Here are 5 examples of homages to musicians that are memorable for many different reasons.

Outside the hometown museum commemorating the life and work of the reggae legend Bob Marley, you can find a not so faithful commemoration of the man himself. If you weren’t literally outside the Bob Marley museum, you’d perhaps be forgiven for having to second guess who the statue is actually depicting. I don’t remember Jack Sparrow learning how to play an electric guitar?

Supposedly, there are 19 of these in the world, tucked away, awaiting their chance to overthrow us all. This 12-metre beast was constructed in the village of Regensdorf, shortly after the passing of Michael Jackson back in 2009. Andreas Grassman, the self-confessed MJ fan who organised the ceremony for the statue’s unveiling, seemed pretty pleased with the result. The rest of the world was not so enthusiastic. The statue depicts a man who does not look at all like the pop star, wearing a power rangers get up, which in reality is meant to be his touring space suit outfit from the 1992 Dangerous tour.

So far, the statues included in this list made it here because of their questionable accuracy, but this next one actually captures the likeness of its inspiration pretty well, which is kind of the problem. For Pete’s Sake is a temporary art piece made by Nick Reynolds, who produced a life-sized plaster cast of Libertines frontman Pete Doherty and popped him up on a cross in a central London church. Apparently representing how Doherty has been “crucified by the media” throughout his infamous career, this is probably the closest homage here to have any sort of artistic value. It’s certainly a bold move that fits in with Doherty’s image and style, but there’s still something a bit weird about willingly depicting yourself as the son of god.

If Michael Jackson is the American muse for all sorts of dubious homages, then David Bowie is the British version. After Bowie’s passing in 2016, all sorts of tributes to the musician appeared worldwide, some of them capturing his look and energy amazingly well (big up the Brixton memorial). However, not all of them hit the mark perfectly, like the mural that appeared in Dublin’s Richmond Street. Looking like a cross between a vague Bowie lookalike and Doctor Manhattan, it suffers a lot from comparison unfortunately, but still gets a lot of positive attention, so that’s all that matters ay?

There’s PLENTY of misshaped bakes out in the world, but this one has quite literally taken the cake. Posted as a wholesome cake recipe online, this tribute to the Red Hot Chili Peppers personifies the rock band as their namesakes. Looking like something straight from a kid’s TV show, it’s an A for effort.

Like that? Why not check out our latest print magazine, available HERE.