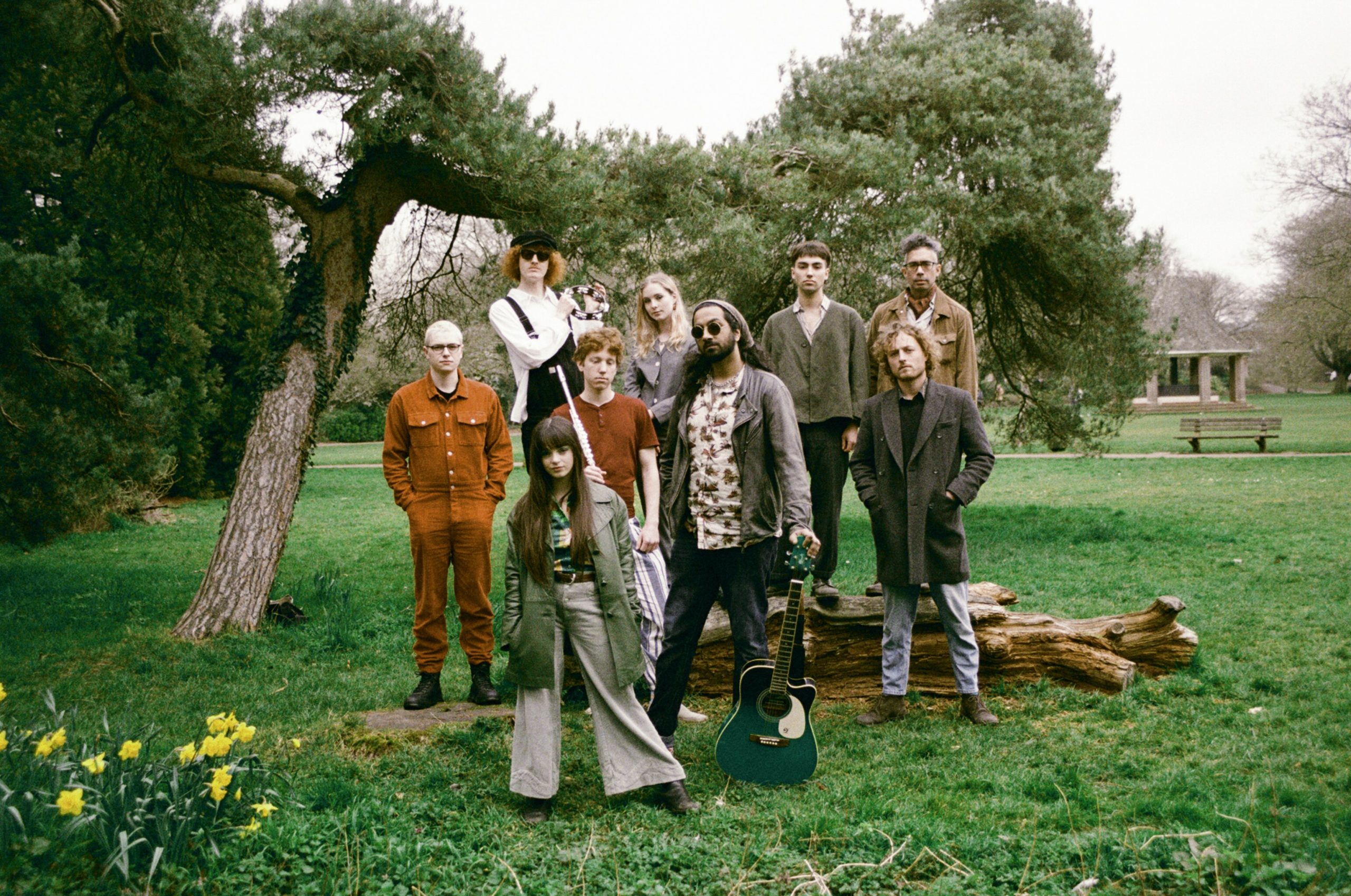 If you’re heading to Float Along festival this year, you’re in for a real treat. You’ll have the chance to see everyone from Everything Everything and Katy J Pearson to Steve Lamacq and Los Bitchos – and one band you certainly don’t want to miss is psychedelic nine-piece (!!) Mandrake Handshake, who will be there celebrating the fact that they “may or may not have new music coming out very soon”, as percussionist Elvis mysteriously says. We sat down over Zoom with Elvis, bassist Jake Kavanagh and guitarist Row Janjuah to talk about what we can expect from Mandrake Handshake’s set.

Fresh off their UK tour, the band is about to get stuck into festival season. By the time they reach Sheffield to perform at Float Along, they’ll have played Shambala Festival, Distortions, and in a full circle moment, Green Man – on the same stage they saw The Brian Jonestown Massacre play just a few years ago.

“The whole band, the whole vibe of it was conceived at Green Man. It’s what we want to convey in our music, that whole atmosphere,” says Row. “We came up with the band on that hill, that year.”

When they talk about the performances they’ve got coming up, it’s obvious that they not only care deeply about their music but that they’re also having the most fun when they’re on stage. That doesn’t mean they take themselves too seriously, however – any “deep” comments that come up throughout our conversation (“The studio was an instrument,” “prisms, not prisons, am I right?”) are met with playful mockery from the other bandmates.

“We just like to have fun onstage, visibly,” Elvis explains. “Some bands might be having the best time on stage and just look really serious.”

“We don’t take ourselves seriously at all, but the music is very good,” Row adds.

Of course, the first thing you’ll notice at a Mandrake Handshake show is just how many people there are on stage. The number of members is generally in a state of flux; right now, you’ll probably have nine people performing in front of you. This has always been a key part of Mandrake Handshake, which aims to be the kind of band where musicians can come and go as they please. Jake, who also plays three-piece rock band 31hours, maintains that it’s actually much more relaxed working in such a bigger group.

“It’s a lot less stressful [in Mandrake Handshake] because I feel like I’m freer. In Mandrake I play bass, so I get to move around and dance and that really helps me connect to the band more. The whole aura is that we get to expel our energy, and that’s really a universal language.”

So, what can we expect from their set? Row says, “It’s very improvised, very loud. I think the idea is to be so tight that you don’t have to have loads of rules. Things will change, and you’ll pick up on the vibe from the audience.

“The main idea is to give everyone in the crowd a memorable experience,” he continues. “You want to have music that caters both to people who are like eyes closed, lost in the sauce kind of thing. And also people who just want to dance without any love for Jesus.”

If either of those sounds like you, you know where to go at Float Along this year.

It doesn’t matter whether they’re on a headline tour, or a festival where they’re the only psychedelic band on the bill; they’ll give it their all either way.

Going on stage and bashing out the same setlist they played the night before, they say, isn’t an option, preferring the more laid-back (or anxiety-inducing, depending on your personality) option of sorting out the setlist 20 minutes before they hit the stage.

Ahead of the new music that they may or may not have coming out very soon, we asked the band to reflect on their first EP, Shake The Hand That Feeds You, just over a year after it was released. Although they’re proud of what they put out, Row makes note of the changes that the band have gone through since their first EP arrived.

“We take different sorts of risks musically and we’re trying to do slightly different things. I think a lot of that came from playing live for a year, which we obviously didn’t do in lockdown when the EP came out. It probably is a bit slicker, a bit more polished than what we are now.”

The musical risks that they take and their reluctance to sound too “polished” are all reasons that the music press has widely labelled them as a psychedelic band. But it’s not as simple as that, they tell us. While Elvis agrees with applying that genre to their music, Row isn’t so sure.

“I like to think of us more as a Krautrock band but that’s probably just to be edgy and not accept the truth,” he laughs.

To settle the debate, they’ve come up with their own categorisation, Elvis explains. “We have our own genre. We call ourselves Flowerkraut to try and digest all of these annoying differences.”

“We like to play with a lot of colour and vibrance. I think that can be very out in London these days – people like more monochrome vibes. We’re very happy to be against that grain.”

Be sure to check out Mandrake Handshake at this year’s Float Along Festival – tickets available right here!