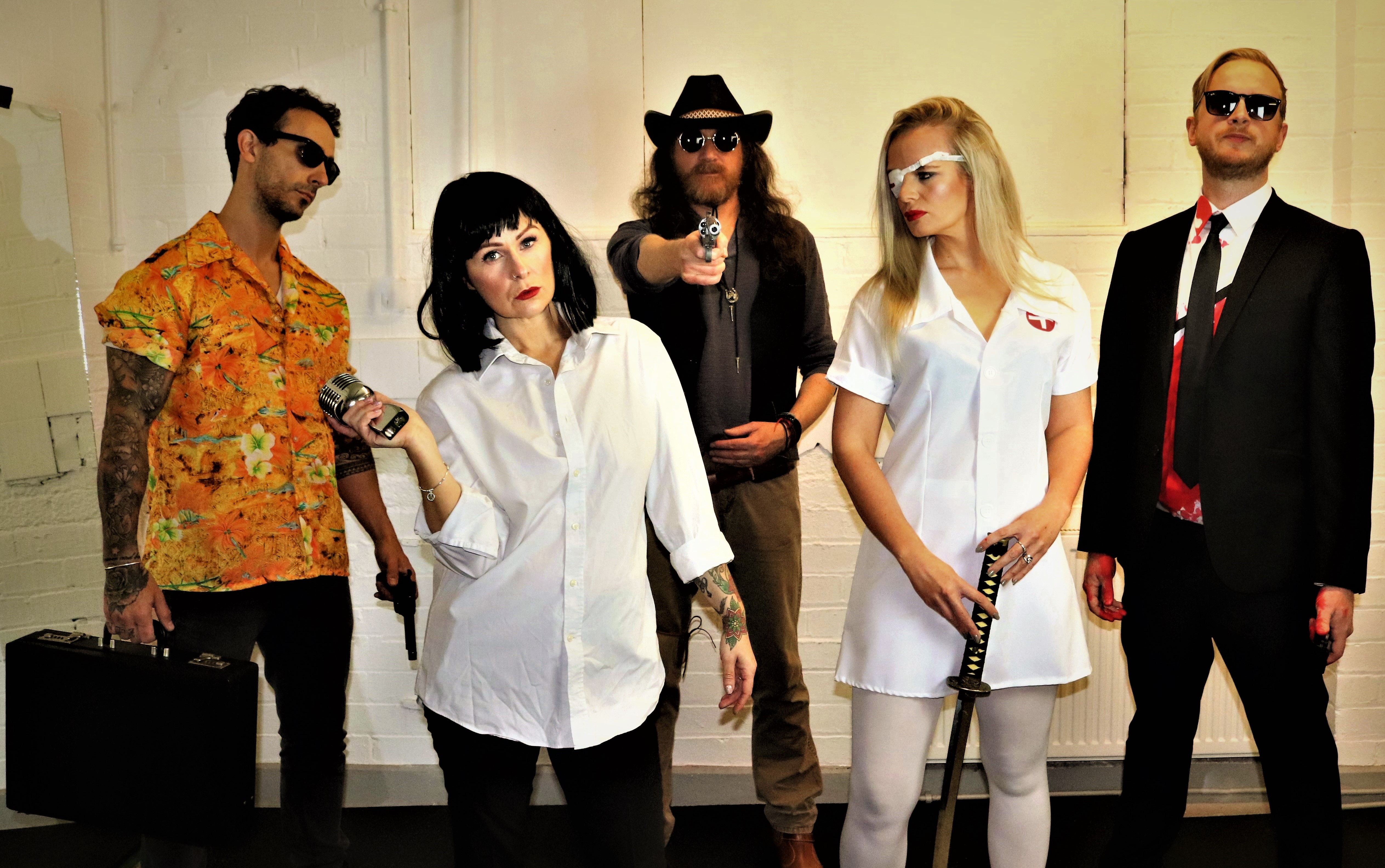 Pulp Friction is Europe’s leading Quentin Tarantino soundtracks tribute show. So much more than the usual tribute, they are gaining the reputation as the coolest show in town & one not to be missed. From classic soul/funk/blues/country to blatant b-movie & niche soundtracks, Pulp Friction will give you a sexy, raucously rocking, gun shooting, sleazy snake dancing, samurai sword-swinging, 5 dollar shake drinking, royale with cheese of a night. There’s just one thing left…to be cool. Are you cool?

What made you fall in love with the Tarantino movies and specifically the music?
They’re just cool. Cool dialogue, cool characters, cool music. They’re many specifics I enjoy but the over-arching feeling from me was I want to do something I thought was cool.

Why did you start the band then?
We wanted to play a variety of music, that people know and love. We didn’t want to be just a single band or play a certain style. The show, it offers both us and the audience an ever-changing stylised experience with scope for dance and acting. It’s a real show I wanted to be part of!

Where did you find each other?
We’ve all had a past, and have known each other respectively, either in signed original acts, singing on cruise ships, touring in Europe or dancing in strip clubs. Somehow, we all came together and it worked.

We’ve all had a past…either in signed original acts, singing on cruise ships, touring in Europe or dancing in strip clubs.

Can you talk us through the conversation that triggered Pulp Friction?
I spoke to the guitarist – Dicky, aka Django – about the concept. He’s another like-minded soul and thought it was fucking awesome. I’m lucky to be married to an extremely talented singer, dancer, performer – Andrea, aka Mia and Beatrice Kiddo. I then spoke to a very old friend – Gary, aka Mr Pink – who seemed more than excited. With our final member – Vicky, aka Elle Driver, sexy Vampire, butterfly, Gogo – it took some time but she’s a very sexy and talented cherry on top of our little Quentin Tarantino cake.

The band is named after the Pulp Fiction film, is that because it’s Tarantino’s most popular, or because it’s your collective favourite as a group?
Everyone recognises its imagery. As a group we disagree on things but we all like Tarantino films and Pulp Fiction is his best. So, easy choice!

Who’s the best character from all of the Tarantino films? Or does that depend on who you’re asking in the band?
It depends on who you ask. There are the obvious, Mia, Jules and Vincent. However, I personally like some sub-characters like Esmeralda the taxi driver from Pulp Fiction, or Esteban from Kill Bill, a very dark character indeed.

What’s the favourite song to perform live?
‘Surfriders’ by The Lively ones. It’s played over the credits at the end of Pulp Fiction.

What can people expect from the upcoming show?
Part gig, part burlesque, part theatre and part party. A very cool and stylised evening, certainly to be seen as much as heard.

Can we expect you to play songs from Once Upon a Time?
Yes, we will!

Finally, why should people come to your shows?
Because if they don’t I will strike them down with great vengeance and furious anger…

Pulp Friction is touring the UK at the moment, including a stop in Manchester on Friday 4th October. Go to https://www.pulp-friction.com/ for more information on the tour and where to get tickets.