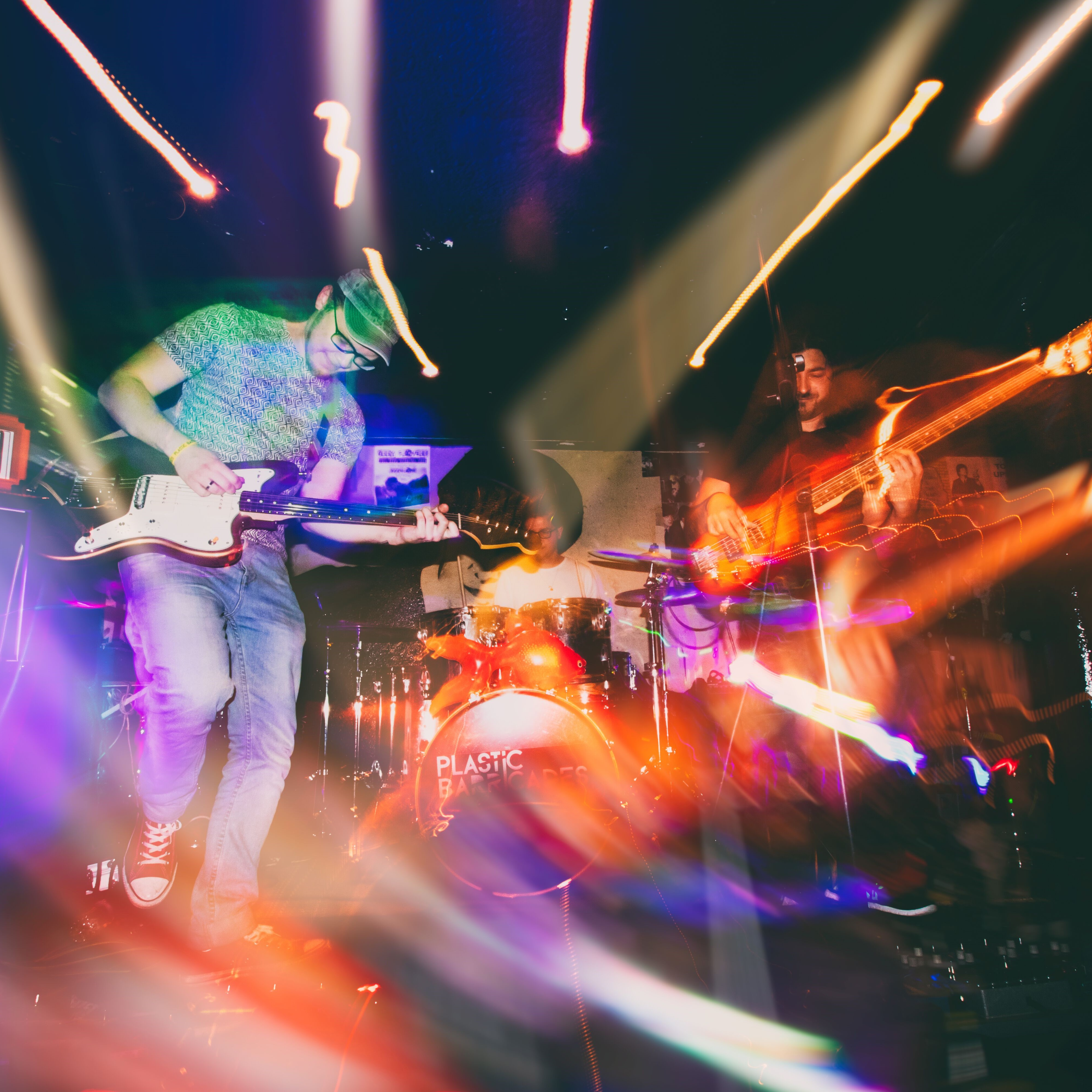 Plastic Barricades make a hell of a breakfast

Howdy! First of all, how’re things going? How’s life treating you?
Howdy! Things are going great. My girlfriend and I are living in Paris, we have a baby on the way. Dan and his wife are still living in London. We have to travel a bit to play together but it’s only a 2-hour journey. Life’s treating us well. We’re really proud of what we’ve created over the last year, Boris Johnson was just found guilty of lying to the Queen and the Democrats are FINALLY going to impeach Trump (or so they say).

Growing up, how did music enter your life?
Music was always there. My earliest memories are my Dad teaching me drum rudiments on a pillow with chopsticks and him bringing home The Beatles new single ‘Free as a Bird’ in 1995. He taught me well and encouraged me to listen first and foremost and discouraged me from learning technique and overly complex fills. I was very frustrated at music school when all the other drummers were streets ahead when it came to chops but it turns out he was right! I could listen to any groove and copy the sound and feel with ease and could sit with any band and they LOVED that I didn’t want to play fills. Still can’t play double pedal though.

How did you come up with your band name?
It’s the antonym of the trial of Wahgo Katta Shrine.

How do you get into the headspace of creating your music?
I wake, figure out what country I’m in and then have breakfast. Kippers, two black puddings, two eggs, half an onion and two cloves of garlic all fried in the same pan with coconut oil and good salt. Served with sauerkraut, lettuce and scotch bonnet hot sauce. Strong black coffee, no sugar, a pint of water and I’ll usually watch a YouTube video either about politics, history or guitars. After this, I wash my hands, brush my teeth and go to the shed. We try to write every day.

Everyone in Liverpool plays two things: Football and music.

What kinds of art and culture inspire your own art?
I love strange languages and alphabets. I read an unhealthy amount of history. I am amazed by the act of creation itself. People have so much tenacity. They just don’t give up. These enormous towers of mud and copper wire. Flying on wings of aluminium, wireless communication, jet engines to the moon. So incredible. Then there’s our relationship with nature: husbandry, pets, the influence and growing and transformation of barely useful crops into bananas, rice, hemp over the course of not just generations but millennia. Each person standing on the shoulders of the last. People are so cool. We forget that sometimes. I’m not sure what arts or cultures particularly inspire my art. I guess the biggest influence has been American music, that’s undeniable but I try to look for inspiration in everything. One of my idols is Richard Feynman. He wrote and spoke about the joy of learning. He was a physicist and he felt that his knowledge of the world, far from removing the beauty of mystery, increased his appreciation for it. To know the delicate balance our whole universe exists and the improbability of our existence is humbling and fascinating.

How has where you’re from influenced the artist you’ve become?
I’m from Liverpool. We’ve had loads of famous bands and musicians like Gerry and the Pacemakers, Cilla Black, Half Man Half Biscuit, Clinic, The Zutons and I’m sure there are others. Everyone in Liverpool plays two things: Football and music. Everyone plays, probably because we’re all Irish and also because it rains every bloody day. Perfect for practice.

What do you think separates metal/punk/hard rock from any other genres? What makes it unique to you?Distorted guitars. There’s a kind of anti-establishment self-loathing thing that can be really seductive that doesn’t exist in other music. If a friend is listening to more heavy music than usual I’ll ask them what’s wrong. There’s this myth that musicians drink and drug themselves to an early grave but the correlation seems to be with the mindset than the musicianship. I love Tool, Mars Volta, Charlie Puth and Kanye West. I love playing in bands, I love playing heavy music but I really hate the snobbery that can come with the scene. Justin Beiber is a great musician and it doesn’t make Rage Against the Machine any worse to admit that. You don’t have to identify yourself through other people’s music. You’re bigger than the bands you love and you can love pop and punk if you want. Suck it, haters. There’s no such thing as a guilty pleasure.

On a more serious note though: look after your friends, guys and gals. Suicide is the biggest killer below 45 and we all have the power to help and be kind to the people around us.

How do you step back and relax after a performance or a period of intense work? How do you escape?
I can’t talk to people after I’ve played. I find it really hard. I can do selfies and all of that but after an hour or more of putting it all out there, I just want somewhere quiet, a cup of green tea and my pipe and slippers. I love to swim in the sea, riding my bike long distance and wild camping, preferably all three in the same trip.

Finally, what’s your plan for the year, what can our readers expect?
We’ve got our first single of this new album out on 1st of October. It’s called “One for the Road” and it’s about making sure you have good company on life’s journey and how easy that makes its hardships. The album will be released sometime in the next 6 months. We’re really proud of it. We wrote and recorded it all in our shed (I swear to god it sounds better than that though) and it was all our own production. We wanted a really honest record. We believe that’s what music is about.

Listen to Plastic Barricades on Spotify and Apple Music. Get our latest print edition HERE.