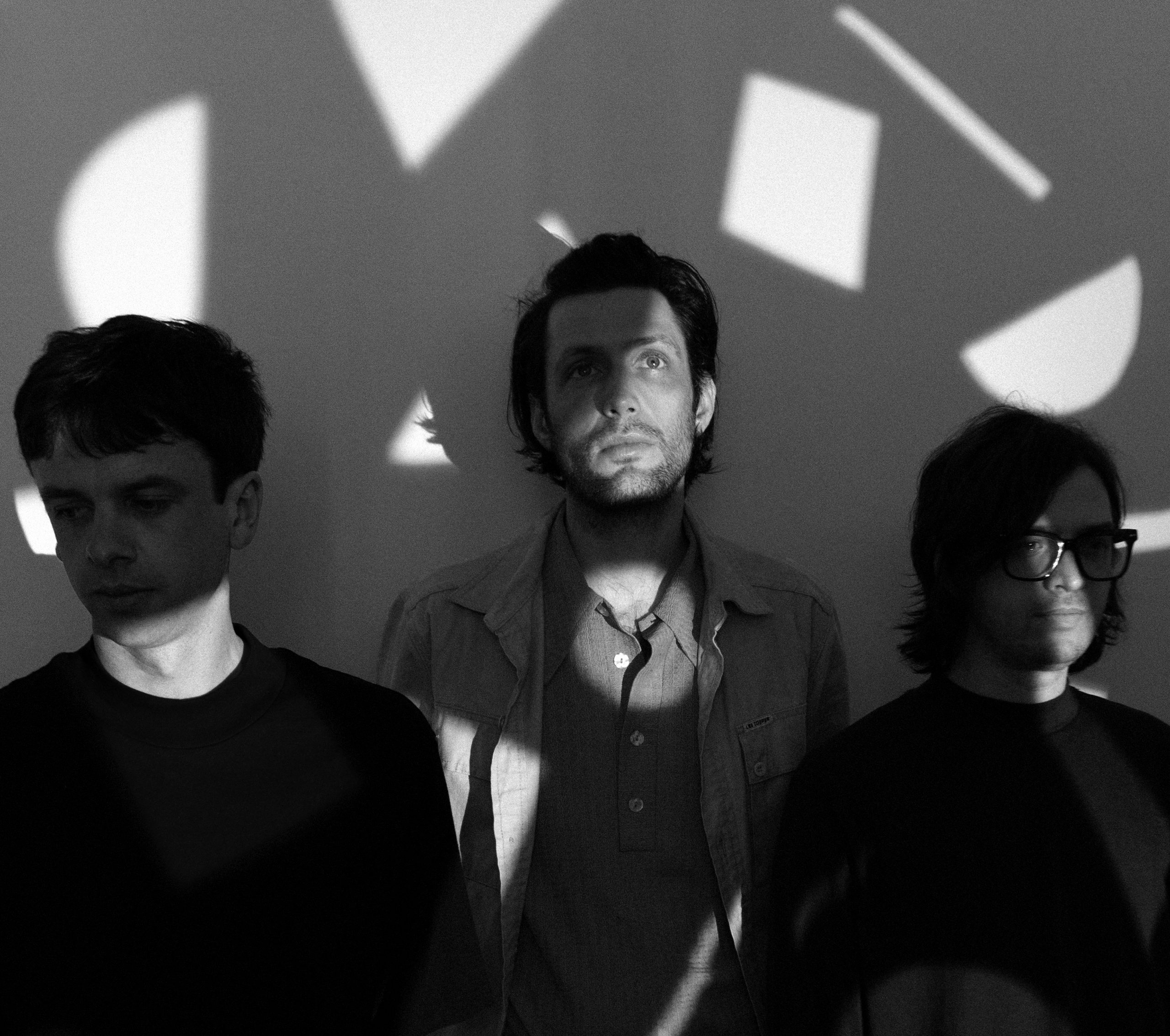 Psychic Markers talk creativity after being caught in a sandstorm

A near-death experience is a good motivation for anything. It’ll get you running again, it’ll show you how much you appreciate your loved ones and it’ll help you enjoy the little things in life. For some, however, an NDE is a great excuse to write that third album you’ve been putting off. Enter Psychic Markers…

Tell me, how does a sandstorm during a road trip a) feel like and b) inspire you to create a record?

Steven Dove: Terrifying and hilarious. My friend was driving and after nearly rolling the car we came through the other side of it laughing at the sheer shock of what happened, three of us in the car all chuckling together after nearly dying. As the realisation manifests and the mind catches up with the physical experience, silence ensues. The uncontrollable emotions of a mind in shock are interesting to me, hence the impact on the record. Art has to be an extension of oneself, directly or indirectly.

Do you often take inspiration from life experiences like that in order to create your work?

Steven: As I mentioned in your previous question art is as important and significant as your voice, use it, express yourself. I was whistling along to something on the radio this morning while painting my kitchen (the joys of corona lockdown) and noticed it was the same melody as ‘I got you babe’, the famous karaoke duo classic. This
wasn’t particularly revolutionary to me as the chord progression has been used over and over. But it did get me thinking about how we take things in a conscious and sub-conscious way and make them our own. Often I find I’ve stolen something accidentally, erased, started again. But then why? How do we define original? Nothing is. If you void your brain/memory of everything you will have nothing so it goes without saying that life experiences – even the mundane – spark ideas.

You have to listen to the people around you, really listen to even have a glimmer of hope in understanding or conveying a different perspective

Time, whether it be the past, the future or the present, seems to be a strong theme on the record. What draws you to reflect in your writing? It can be a seductive thing.

Steven: I’m pathetically nostalgic and I also spend a lot of time working my day job on my own. This offers me extended periods of self-reflection and it’s during these times that lyrical themes or musical ideas tend to show themselves. Lyrically, the second record was written more from within whereas this time round I wanted to write
from a perspective of others. ‘Clouds’ is written from the perspective of a child and ‘Where Is The Prize?’ from an older person heading towards the end of their life. You have to listen to the people around you, really listen to even have a glimmer of hope in understanding or conveying a different perspective. You rely on the information or honesty you get from the people around you in order to create the personality of the people in the songs. Just like a scriptwriter creating a character.

It feels like the new record was quite an existential exploration for all of you, what have you learnt about your life and yourselves from writing it?

Leon Dufficy: For me, this record was one of the more difficult things to make. Personally, I guess it was a bit of a journey. With everything being so accessible these days, every week there seems to be some new reissue of an amazing lost record or a film that throws everything out the window. It’s hard to sweep all that aside and not let it influence your creative decisions. In my mindset it was either we make something unique and worthwhile or nothing at all. The last we thing we wanted was to release just more ‘content’ to fill the gap. It needed to mean
something, and the more pressure you put on art to try and be more personal, the more you second guess yourself and you can get easily get lost. You just have to trust your inner vibes and roll with it.

I’m beginning to feel more comfortable with putting my ideas on the line and not worrying as much about how it’s gonna be received.

The writing on the new record creates chant-like, hypnotic, even nightmarish moments. Did you approach your writing, both lyrically and musically, with an intention to break conventions?

Steven: This album was written, recorded and mixed without the input (excluding indirect influence) from anyone other than members of the group which gave us a world of our own in which to exist/create. In the past, I’ve had a habit of sharing early recordings or unfinished tracks with friends, musical peers or people whose opinions I respect. This only leads to the watering down of ideas. I’m beginning to feel more comfortable with putting my ideas on the line and not worrying as much about how it’s gonna be received, which is extremely liberating.

Leon: Yes totally, both Steven and I get excited by many of the same things. In the process of making this album, we just followed where the songs wanted to take us. For example, the track ‘Sacred Geometry’ was lost for a while, we knew we liked the bare bones of it but it was not hitting the mark. One afternoon we were just messing around with zero ideas and then it showed itself to us… A bunch of witches standing around a fire chanting, shaking bags of goats toenails. After that it kind of just wrote itself, we were there for the ride… It does get a little scary by the end.

Sonically speaking, the new record is a development from your previous records; electronic elements are far more pronounced. How did you approach changing your sound? Was it something that came naturally or from a particular instrument or style?

Leon: We’re both obsessed with gear and recording, trying to find the sounds trapped in our brains and get them down on tape.  I think it was both a natural evolution and inspiration from new gear.  The more ept we became with the process of making an album the further we have been able to push the sound.  We did go into our own little cave for a while and it’s all we could talk and think about, I’m sure it drove our friends and families a little crazy haha

Steven: As people, we should be constantly evolving and making an album is about capturing where you’re at as a group at that specific moment. You’re influenced and inspired by the shit that’s going on around you, to the finite detail. As Leon mentioned we had some weird times in the dark basement studio in Greenwich, there’s no way ‘Sacred Geometry’ would have ended up sounding like an apocalyptic sacrifice if we were in a polished shiny studio in West London. We always like to set a mood. For this album, we bought some lights that flash and alternate colour to the sound in the space, so we made most of it in darkness with the help of a constantly evolving light show.

As people, we should be constantly evolving and making an album is about capturing where you’re at as a group at that specific moment.

The videos for the new singles have included some really interesting visualizer, what drew you to the visual aspect of your art this time around?

Leon: There was a period in film making around the late ’60s and early ’70s which just resonates visually and sonically with me. From the look of old film, to the weirdness of experimental and primitive visual effects, especially in the Czech new wave, European giallo horror, British supernatural/cult children’s television and of course in the 90’s, the world of Lynch. It comes back to making an album that is 100% us, trying not to be
anything else. Just who we are as humans and what resonates with us.  Slightly avant grade with cultish weirdo tendencies.

Finally, in these testing times, what records can you recommend to our readers to help them through?

Steven: I’ve been listening to a lot of Italian film composers, Alessandro Alessandroni, Piero Umiliani and The Cannibal Holocaust Soundtrack by Riz Ortolani is ace, it has the most beautiful intro theme. I like otherworldly stuff, music that sounds like it’s from another planet. Me and Luke have a show on Resonance Extra called ‘Cosmisch’ filled with all sorts of gems, they archive everything on mix cloud so go listen!

Listen to Psychic Markers on Spotify and Apple Music. Fancy getting your hands on a psychical copy of The Rodeo? Check out our shop HERE. P.S. we have limited edition postcards featuring each member of Hinds available!