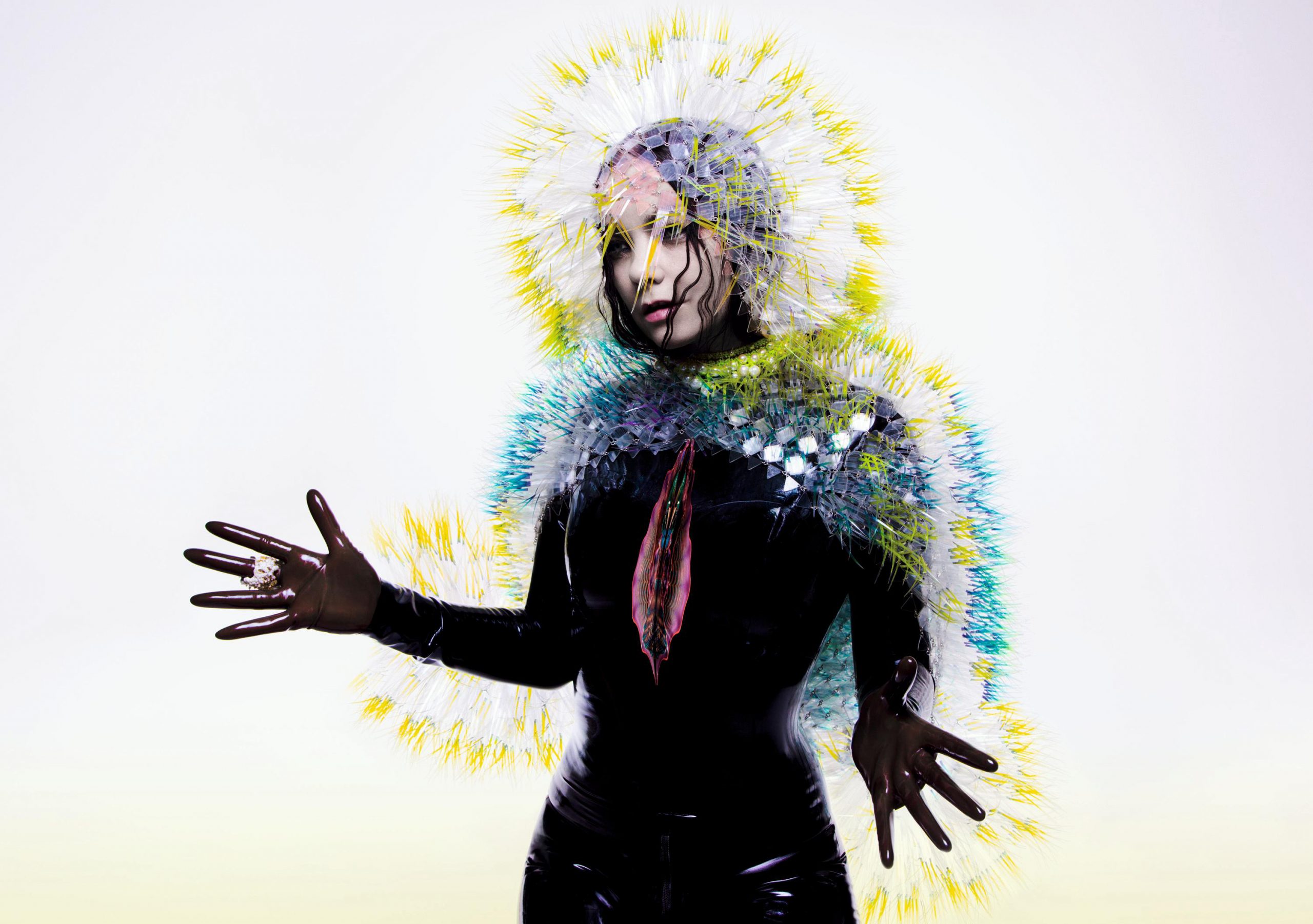 What if Björk never existed?

A tongue-in-cheek look at the world without the Icelandic musician.

I’m alone, lying on my bed, contemplating something bigger and more complex than myself. I’m looking for tracks to listen to – some music about nature, life, love; music that spans from trip-hop to jazz, alternative punk to techno-futurism. Something to score my mutating, mutual core, but alas, my scrolling through Spotify’s extensive ‘Made For You’ mixtapes is unproductive. I’m left with nothing to soundtrack my rare evolutionary, biological thinking. I’m left in silence.

This is a world without Björk – and it terrifies me.

Björk is a multiplicity in herself. From the eclectics of her costumes to the range of her vocals, the worlds she creates are humbling and harlequin. She’s been creating music for over forty years and has the innovative and wide-ranging back catalogue to prove it.

The artist has undoubtedly had an incredibly successful career. She’s had around 40-million record sales, several albums reaching top 20 on the US Billboard 200, 31 singles in the top 40 charts globally and 22 top 40 hits in the UK. She even won the award for best actress at the Cannes Film Festival once in 2000, and has been hailed as one of the world’s most influential people.

Admittedly she’s a bit of an odd one though, and her music is about as complex as her persona, sitting in that sweet spot between being incredibly accessible and limitlessly avant garde.

All of this has got me thinking, what if Björk had never happened? What if she’d never made music? Never pushed the boundaries of mainstream music? To try and put the issue out of my mind, I’ve come up with three different scenarios surrounding Björk, hopefully answering the question: what would life be like without her?

Not musician, but politician

Björk is someone who gets things done. If her musical repertoire had been left to the annals of history, say in an alternate universe for example, it’s not that hard to imagine her going into politics.

You can imagine Björk’s political career being as varied as her current musical offerings:

The radio news bulletins would read: “Today, President Guðmundsdóttir announced plans to introduce Universal Basic Income for all Icelandic citizens. It comes as part of her plan to reach an even higher level on the Global Peace Index, even though Iceland already ranks first on that list.”

“At a younger age, the President put down the musical instruments in favour of Chomsky’s The Political Economy of Human Rights and Tressel’s Ragged-Trousered Philanthropists, reading with an inspiration stemming from the hallowed halls of Alþingi – the oldest surviving parliament in the world.”

It would make sense that she’d end up working within the world of Humanities. In our reality, the one where Björk exists as an enigma, her influence has already stretched into the world of modern philosophy.

Her music inspired the eminent ecological philosopher Timothy Morton, whose ‘Hyperobjects’ (denoting n-dimensional non-local entities – come on, keep up) was influenced by her song ‘Hyperballad’. If she wasn’t around to create these introspective, metaphysical soundscapes, we probably wouldn’t have had the seminal works of Humankind: Solidarity with Non-Human People, Ecology Without Nature, and definitely not a particularly stirring series of emails between Björk and Morton – covering the Anthropocene, Michael Jackson, causality, haikus and everything in between. Well, we probably would have had the books, but THOSE EMAILS.

It’s hard to pin down exactly what Björk would be like as a politician as she doesn’t like to be seen as a political figure. That being said, she has already stated her support of the independence of many countries and states, such as Greenland, the Faroe Islands, Kosovo, Tibet, Scotland and Catalonia.

I for one can imagine her being forthright as a politician. Instead of handshakes, she’d do hugs. Every presidential debate would be attended in a new contemporary suit. She’d be fully in support of electric cars, drug legalisation and a three-day weekend. Political figureheads would see her like marmite – to be endlessly loved or vehemently hated.

Plus, imagine if she was a fascist? Those uniforms would be undeniably fashion-forward…

Not Biophilia, but biology

Make way ‘Náttúra’, it’s nature’s turn – Björk turns biologist. Again, this seems like a very comfortable career choice for Björk Guðmundsdóttir. She’s obsessed with the subject, collaborating with everyone from, well, Timothy Morton to Thom Yorke in her work to promote the natural environment. It’s pretty stirring stuff – but what if she’d actually become a biologist?

I’m imagining she creates something much too complex for me to understand. Something akin to MIT professor Neri Oxman’s work with biological architecture (Who Björk actually collaborated with to create a range of 3D-printed masks). Wearable mould? Gene splicing to turn you bioluminescent? A device for speaking to whales? None of these seem too far fetched when thinking about the narratives the songstress has coalesced into existence.

On the other hand, she may become too obsessed with her work, developing a vaccine with lofty goals that ultimately ends up wiping out humanity. Who knows with Björk? This leads me to our final scenario.

Björk happens, but the world ends

We’ve all seen the films where a dystopian or post-apocalyptic society worships some kind of god, object, or pop culture reference. We saw it in Mad Max: Fury Road, where Immortan Joe was praised as a demi-god. Or, in Rick and Morty’s ‘Rickmancing the Stone’, where the wastelanders worship a big glowing rock, Isotope *burp* 322. But what if, say, Björk was the figure being worshiped?

This would pose issues for the future of the planet. See, the Icelandic songstress is one of the world’s most prolific genre-escapologists. As soon as you’ve categorised her, she’s released something completely different. This is the main cause of bittered encampments within her loyal fanbase, each vying for dominance when they utter things like “Post is her most transformative work, and therefore her most influential!” or “Did you not even hear ‘Stonemilker’? You blasphemer.”

Imagine: dust, sand, and human bones are scattered through the vinyl section of a once-celebrated independent music store. The dull brown of dried blood hides 50%-off stickers and Now That’s Why I Call Music 2050. It’s Record Store Day 2149, the original meaning of the day replaced by one of gore-red hymnal and cannibalism – like Black Friday, but with more facepaint. It’s your turn on the sacrificial pyre. Your sin? Being a Utopian. You were captured by the Biophilians – the most brutal of Björk-followers, who take track eight of the album literally.

Rest assured in your demise, you will awaken in radiant fields and sit at the right hand of Mother Björk, guided by the Arca-angel. Be at peace in the eternal rays of Utopia.

Fortunately for us, we live in the reality where Björk decided to become a musician. If she hadn’t developed such an artistically-intense and diverse discography, we probably wouldn’t have the eternal banger that is Evanescence’s ‘Bring Me to Life’, where singer Amy Lee admitted the Icelandic songstress’ Debut was a huge influence on her. “She opened my eyes to a whole new kind of music.” Thankyou Queen B(jörk).

Hell, we wouldn’t even have that completely badass remix of ‘Army of Me’ by Björk and Skunk Anansie for Sucker Punch (2011). The remix takes Björk’s 1995 song (from Post) and changes it into something insanely guttural, with thrashing guitar underscoring Björk’s almost feral growling – creating something even more anthemic than the original.

We also don’t live in a post-apocalyptic hellscape. Sure, we have global pandemics, ineffectual leaders, a society based upon the structures of global imperialism and the Fast & Furious film franchise. But we also have Debut, Post, Homogenic, Biophilia, Vulnicura, Utopia and all her other work.

I mean, it doesn’t quite make up for all the shit in the world – but it’s a start.

Enjoy that? When not try out a copy of our print magazine available HERE.