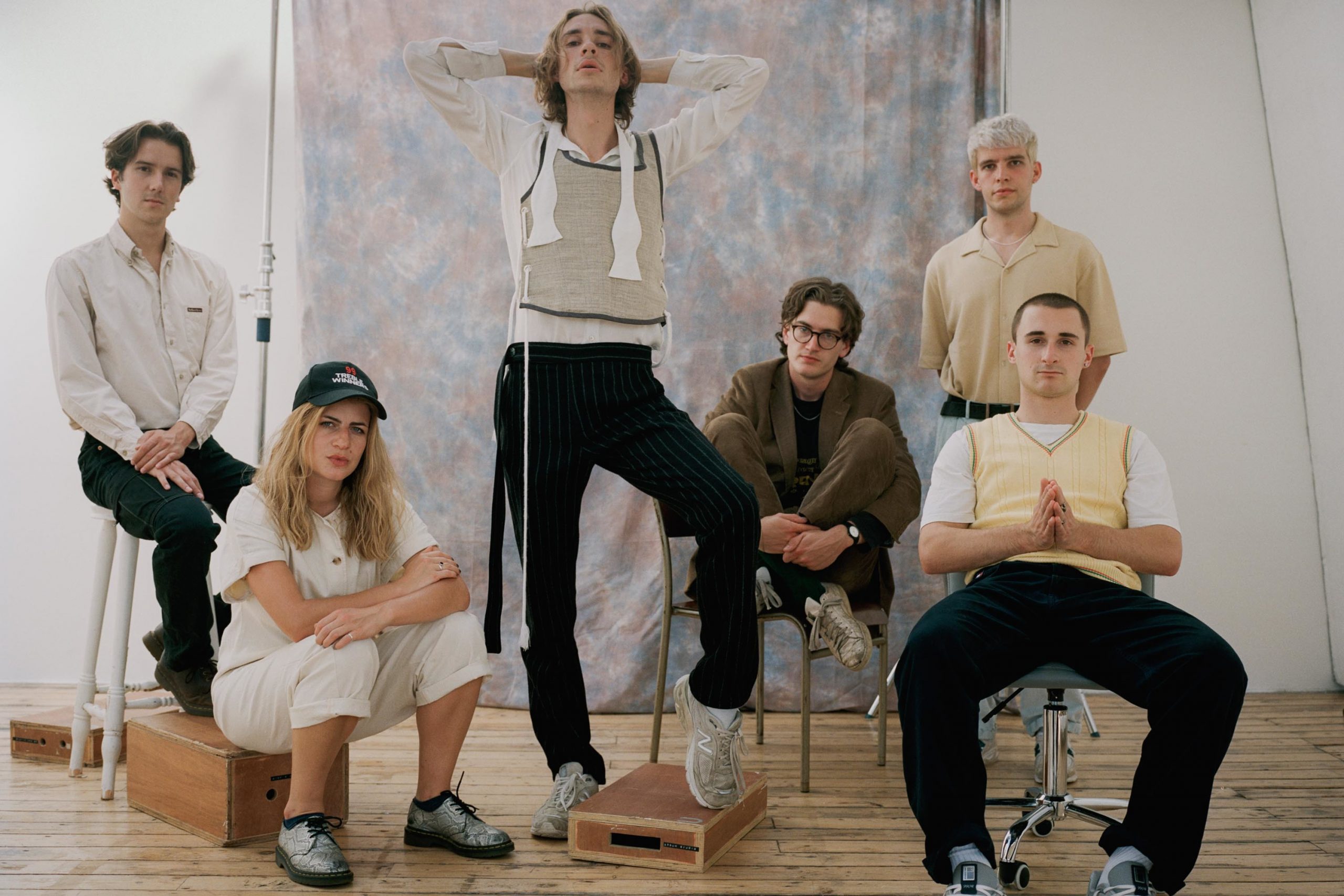 Second in the charts league: Sports Team invite us onto the playing field

Between releasing their debut album, going neck-and-neck with Lady Gaga in a chart battle and attending Black Lives Matter protests, it’s a peculiar time to be a member of Sports Team. As I spoke with lead singer, Alex Rice, the band’s debut album, Deep Down Happy sat top of the midweek charts. The London-based band were eventually pipped in a Blur-like fashion by Gaga, but it was the experience that mattered.

“It’s a funny time to be releasing an album,” admits Rice. “We are happy to have it out, as strange as the whole climate is.”

It’s a rock record and it’s meant to be played live.

The publicity from the new record, alongside being the talk of twitter and attending the protests in London week has all helped Sports Team use their new found platform for change.

“I think it’s the first time, in our lives at least, that people have spoken to us as if we do have a platform – it’s never really occurred to us that people want to hear us speak about issues. I think we are getting used to the opportunity: we do have to make a difference to certain things, even if it is as simple as helping fans become a bit more comfortable to come to a protest, or just having a conversation with them about some of these issues. They’re as clued up as we are, they’re smart kids and we learn a lot from them as well.”

The release of an album and chart battle has given Sports Team hope in a world without a live show, the eccentricity of theirs being their most valuable asset. Having had big slots at Mad Cool and Piknik cancelled, the focus is now on playing their new stuff live, post-lockdown.

“When lockdown first came in we had to cancel our flights to Austin because we were supposed to be playing SXSW. I think we all thought that it would be over soon – we pushed the album so we could do all our live dates around it, but now that’s obviously not going to happen.

“I think that’s the bit we are giddy for: to play new songs live and see the reaction from people. The live show is everything for us, we analyse it until the cows come home. That’s how the album was written really – it’s a rock record and it’s meant to be played live.

“It looks like smaller venues will be the first to open, I think we are quite positive about that,” Alex explains. “If we can only play 100-cap venues it would be amazing to play parts of the countries which don’t usually get live music, which feels quite positive.”

Rice’s optimism is palpable, a genuine respect and adoration for anyone who listens to Sports Team music evident throughout our conversation. What is most attractive about Sports Team is this positivity, masked in slapstick commentary of characters in the modern British society: the post-Brexit ‘gammon’ (‘The Races’), the pretentious post-punk bands that have sprung up in the last few years (‘Camel Crew’), the parents who tell their kids white lies to get them to go to sleep (‘Here’s The Thing’).

“I think it’s speaking from what you see of the world around you really. It’s this kind of recognising that you are part of a system, but also recognising the absurdity of all of it. That’s how we’ve always done our social commentary.”

Rice has previously expressed his disdain towards punk band HMLTD, calling them out on early track ‘Camel Crew’ for their attendance at Goldsmiths in London, dyed-blonde fringes and ultimately unsuccessful signing with Sony. Sports Team have recently begun working with major label,  Island Records, but haven’t suffered the same fate as their rivals.

“You hear a lot of sob stories about major deals, but I think [Island Records have] always just been brilliant for us. They said whatever you’re doing seems to be going well organically, so basically have money to continue doing that on a bigger scale. It’s a group of mates as well – it feels so indie in the sense that many of the people that work on it are round our house all the time, they’re the people we’ll have nights out with. I’m glad they all feel like a group of friends.”

The heartbeat of Sports Team is their fans. The band engage with them as much as they can, from the fanatic fans in the first ten rows of a gig to the ones on social media.

“I think for us, we remember going to gigs and having all these formative experiences; we saw bands like Egyptian Hip-Hop and WU LYF. We see a lot of ourselves in these kids, and it’s nice as well because I think the album is sort of a commentary and a picture of modern Britain. A big facet of that is that you’ve lost a lot of sources of community to people – whether it’s a working men’s club or a sports team. Us and countless other bands have still made such a success of that, and it does feel like it gives people a sense of identity and togetherness at a live show.”

Sports Team’s engagement with their fans has come in a variety of ways. Whether it’s online conversations with them (via a WhatsApp group of over 1,000 members) or merely their openness on social media, Sports Team have created a new community full of chino-wearing and Supreme-loving fans who memeify everything the band get photographed doing.

“The WhatsApp group started [after I put] my number on our original lighter, which was our first bit of merch, so a few of [our fans] started adding us to things. I suppose the nice thing about it is it’s self-sustaining – we don’t really do anything, you just sort of wake up to 10,000 messages every day. These kids have become friends, they meet up. We feel very open and quite grateful for everything they’ve given us.”

Guitar music has been alive and kicking for a long time (despite what some parka-wearing Manc wants you to believe), Sports Team being one of many important new bands, but Alex doesn’t see it that way.

“I don’t think we really need to do much to be honest, [guitar music is] something young people are always going to be attracted to because it’s so visceral. Bands like Fontaines D.C., Shame, Squid and Sorry, who we all listen to, are just brilliant at doing exactly the same [thing]: making live shows an event again. I think our fans, at least in my experience, listen to a much broader range of genres than we did when we were kids. I don’t think they view it through a vein of guitar music anymore, which is quite nice.”

The beast that is music consumption in the 21st century means that, in order to stay relevant, Sports Team will have to keep the releases coming. As an outsider, time spent at home seems like the perfect opportunity to write new songs, but the pressure to be creative is one being pushed on everyone at the moment.

“This week has been tough because we have been giddy about the record coming out, but I think we always have this awareness that it’s not enough to do one album and sit back. People are fickle; we’ve talked about that community of fans, but you’ve got to give them something all the time, so we want to get a second record out really quickly.”

Rice is refreshingly unfiltered throughout our chat, a trait that’s caused Britpop-style ‘beef’ with Shame, Black Midi and most recently Matty Healy of The 1975.

“That was all quite nice really, he did something on Instagram when he posted a story saying he wished he could be indie and from London, with a picture of us from one of our really early, sad press shots – it was pretty funny. So, as a bit of a joke we put that on a t-shirt in The 1975 style, [with] the neon writing and the block text. We stuck it out, then Matty said it was great, retweeted it and we raised a bit of money for CALM. It was pretty good nature, I think he can probably laugh at himself a bit.

“You learn how to do interviews and communicate yourself better; as soon as you’re a singer in a band, people expect you to be a coherent political commentator or try and put everything into a wider context. I don’t think I’ve been very good at that in the past, but hopefully I’m getting better,” he says. “I do look back at previous interviews and think I wish I’d spoken better about [some things].”

Sports Team, and Alex Rice in particular, have reconnected young people with guitar music. The parading of relatable characters and bent over look at Britain has seen them rise to prominence in the world of indie-rock. They may have been defeated by Gaga this time round, but they’re already preparing for the rematch.