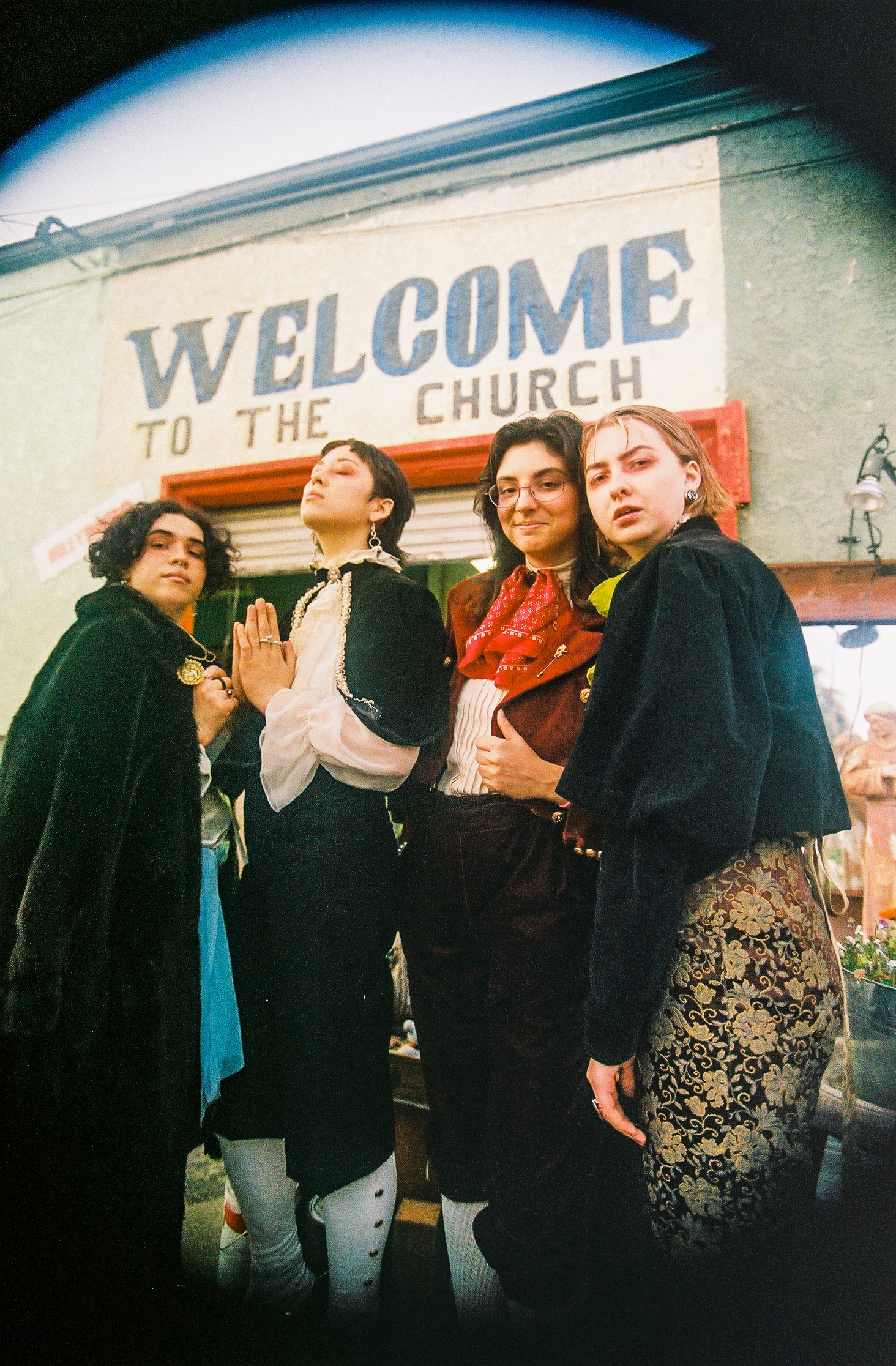 Ahead of the release of their debut LP Androgynous Mary, we caught up with the LA-based awesome foursome Girl Friday.

Can you explain where the name ‘Girl Friday’ came from? What does it mean to you all?

Sierra: Like any good band name, it’s an anagram of “I dig Frylar.” And we all know what that means.

What was the writing process like for this debut album? What story did you aim to tell, and what tones were you trying to set?

Virginia: I don’t think we had a specific tone or story to tell, all the songs just ended up sounding cohesive in both sound and lyrics. The only goal we set at the beginning of the recording process was to have the album more accurately reflect our live sound.

As it’s your first full-length album, what did you find most difficult about life in the studio?

Libby: Trying to navigate through a song and see it through to its vision without being afraid to experiment or hurt feelings. Definitely gets hairy sometimes.

Virginia: Staying focused and letting go of the idea that something has to be absolutely perfect in order to be done.

Sierra: I have a fair amount of anxiety around the concept of “jamming” to create something new in a group. It was tough for me to let go of my almost compulsory need to write all of my parts without anybody around and just give in to whatever they might become in that moment.

Your debut EP ‘Tiny Hats’ was released 3 years ago. Over the past 3 years, what have you learned that helped you with writing and recording Androgynous Mary?

Sierra: I’ve learned that if you enter any room with a bang, singing Alaska’s verse from Read U Wrote U in your head, there is simply nothing you cannot achieve.

You’ve claimed that the title of your debut album, Androgynous Mary, was inspired by “parking lot murals, divine intervention and subverting Western ideologies about holiness”. What’s your relationship like with aspects of holiness?

Libby: I have reclaimed what godliness and perfection mean to me in the past year. The idea of holiness is associated with a lot of debilitating trauma. Everything was a catch-22. An omnipotent and all-loving God who also would not flinch to send millions and millions of people to hell. But what if heaven is a place of regret? What if I enjoyed burning more than I ever enjoyed singing to someone I did not love? Holiness is not a contradiction. Holiness is the whole picture. Even the dirt.

Virginia: Personally, I was raised Catholic and to me, holiness has always been associated with an unachievable state of perfection. Since perfection meant living by a set of contradictory rules that were often exclusionary and close-minded, it became a negative source of shame and suppression as opposed to a state that I wanted to aspire to.  However, I’m still fascinated by the rituals of Catholicism, and I find depictions of saints and martyrs so mesmerizing.  My idea of holiness is constantly changing and expanding beyond what I was raised to believe, so maybe I’ll be able to have a more positive relationship with that term in the future.

Sierra: I find holiness especially in areas that are sometimes thought of as shameful or dirty, because so much of what we consider unholy is dictated by fear and restraint. I imagine it will be a lifelong process to keep finding it and creating it in those places, but that’s part of the fun.

Vera: Holiness is the trinity – moon, sun, earth – god is everywhere is our day to day reality, you needn’t look far.

The music video for ‘This Is Not The Indie Rock I Signed Up For’ is quite personal, showcasing your performance skills but also partaking in day-to-day activities. What was your aim in creating this contrast? Did you want people to recognise and resonate with you as normal people?

Sierra: I’ve been shooting handycam videos of us over the past few years, and we had talked about using the footage for a music video for quite awhile. I always love to see other bands just being their weird selves, and it made sense to us to use those clips for such a personal song. It was especially important for us too because we were releasing the single during a quarantine order that made so many of us feel isolated from that kind of careless intimacy.

Vera: No, we wanted them to resonate with us as beasts.

As you guys direct your own music videos, do you find it easy to represent the music through the videos?

Virginia: We’re all interested in different visual mediums, whether it be film, fashion, animation, etc, so creating music videos to accompany our music is a pretty natural next step.

Sierra: The directorial prowess does not rest upon these shoulders. I, too, am impressed by my colleagues’ visual capabilities.

Your song ‘Amber Knees’ was inspired by the reality TV show, ‘Rock of Love’. What do you love about reality TV? How, if at all, did this inspire you in your songwriting?

Sierra: Rock of Love is one of the few reality TV shows I’ve watched, and it turns out that I hate most things about it. But 1. it’s accidentally campy, and 2. it’s always so funny to see other relationships prioritized above the one people are meant to be vying for. In Rock of Love, we see a lot of unfortunate misogyny, racism, transphobia, take your pick, but we also see some women clearly liking each other more than they actually like Bret Michaels. Plus we get some timeless and nonsensical quotes such as, “Bret’s a rockstar. And if you want to date a rockstar, then you’d better get used to falling off the stage, bitch.”

How have you found respite during the ongoing pandemic? What hobbies have you been indulging in?

Libby: Writing music and poetry and exploring the bounds of their intersections. and making things with my hands. I’ve been making lots of clay sculptures.

Vera: Music when I should be allowed the inspiration and family.

Virginia: I’ve been able to find more comfort in writing lately, and I think it’s definitely helped me to process the events of this year.

Sierra: Sitting (and occasionally writing) on the bathroom floor, reading Evelyn Waugh, watching The Umbrella Academy, and sleeping a lot are just some of my thrilling pastimes.

When live gigs and world tours become possible again, will you be going to watch one first or playing your own show first?

Libby: I’ll never set foot in a bar ever again.

Virginia: I think I’m just gonna find a dark bar with a nice back corner and listen to someone else play.

Sierra: I’m not much of a casual concertgoer, so if one of my favorite bands is playing, I will plan my attendance well in advance and get ready to open to floodgates of my tear ducts. If I should play a show before that happens, I shall be just as happy.

Vera: Here in New Zealand that’s already happened. My first show was a punk fundraiser for BLM and PAPA at this real ‘kiwi’ bar. I just got right up the front and lost my shit and hearing. Twas grande.