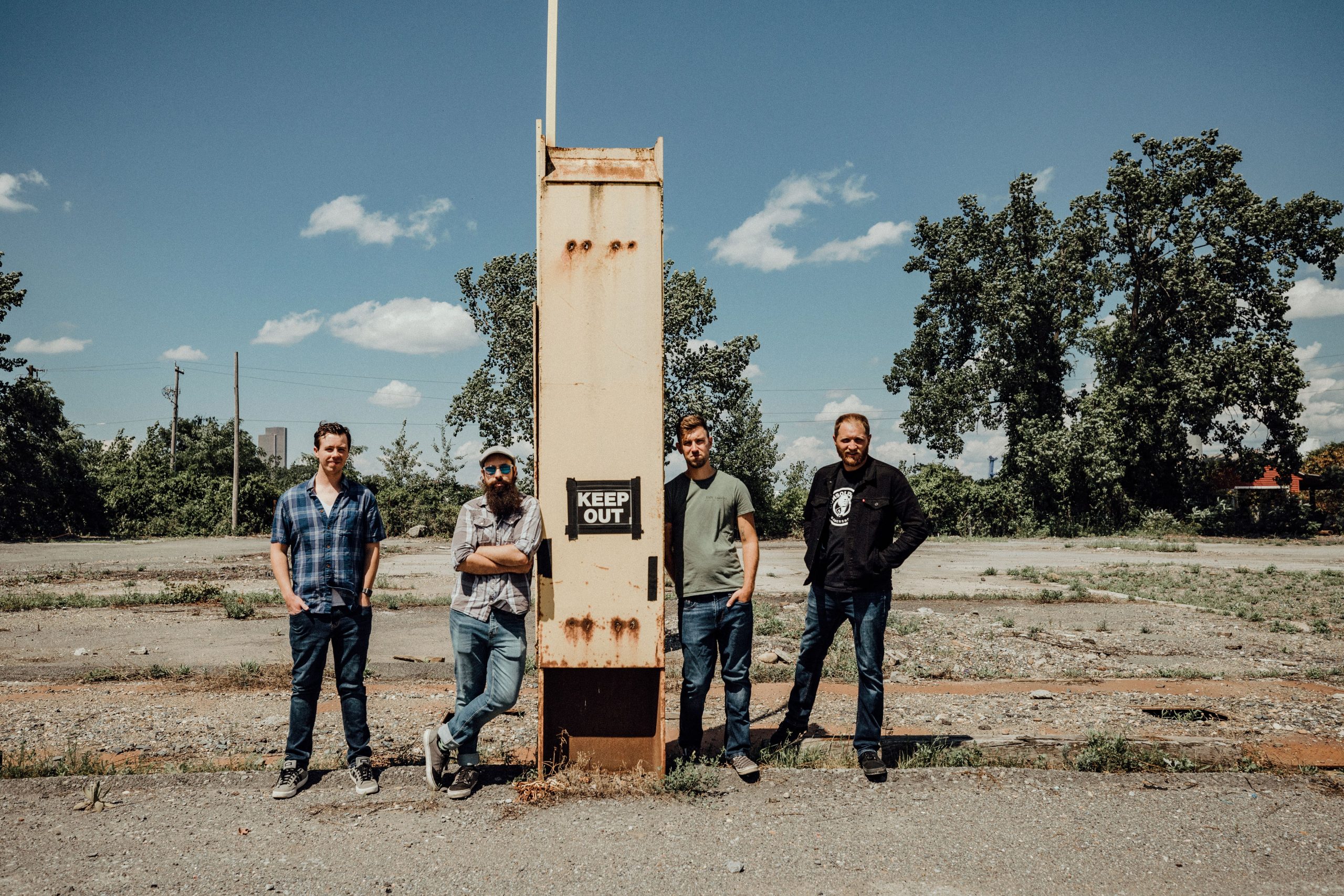 E.R.I.E turned a bad year into a good album

When your lead singer’s heart stops for 15 seconds it usually spells the end for most bands. But for E.R.I.E, it was just another shit scenario in an already shit year. 2019 may not seem quite as bad as what 2020 has turned out to be, but for E.R.I.E it was especially hard. Each member fighting their own battles with mental and physical health, the year forced everyone to reevaluate what they were doing.

Naturally, the band started by focusing on what makes them happy, writing music, and began work on their debut LP.

Doing nearly every aspect of the ‘process’ themselves, using lead singer TJ Foster’s family home as a make-do recording studio, E.R.I.E set about turning ‘disorganised chaos’ into to semblance of a record.

The result, Don’t Wanna Live, Don’t Wanna Die, is a blunt but heartwarming look at everything that can happen to you during the course of a year. Sure it’s bleak at times, but it’s also hopeful at others, and the album’s overriding sense of positivity about the future is a comforting message in an otherwise uncertain time right now.

We spoke to the band about the re-release of Don’t Wanna Live, Don’t Wanna Die, the experience of ‘that’ year and how they’re dealing with issues of mental health.

Hey! How is everything going? What have you been up to?
Matt Delgado (guitar): Oh, you know – whole lot of nothing. Haha! Actually, I think E.R.I.E. has made pretty good use of quarantine. We’re all fathers first and foremost, so navigating these times is a multi-front challenge. That said, developing and building E.R.I.E. has been a cathartic opportunity for all of us. We have started to hit a stride in finding new ways to do familiar things. Practice occurs in a garage where we can safely space, we can send audio back and forth digitally when working on new material, and of course the requisite Zoom band meetings. Our CD release show in March was cancelled, so we had been looking for a partner to livestream one for the re-release of Don’t Wanna Live, Don’t Wanna Die and we have that lined up now as well.

Let’s start at the beginning, so E.R.I.E came out of a traumatic experience in which lead singer, TJ Foster’s heart stopped for 15 seconds. Could you explain to us what happened that day?
TJ Foster (Vocals/Guitar): It’s a bit of a long story, but the cliffs notes version is that I was frequently having what’re called vasovagal episodes – basically, a separate GI issue (which went undiagnosed even longer) was causing me to pass out a lot. No one could totally figure out why, but by the wonders of technology mixed with a little bit of lucky timing, it was discovered that one night I collapsed on my bathroom floor and my heart stopped for 15 seconds. Cue a lovely 3-day stint in the hospital, emergency heart surgery, and the rest is history.

It sounds like a terrifying thing to have to go through. How did that experience change your perspective on writing and recording music?
TF: It was definitely a pretty harrowing experience. I was in the hospital for three days, spent a decent amount of time alone with my thoughts. I remember a lot of asking myself existential questions – I’ve had a lot of ups and downs with my mental health over the years and going through this was particularly taxing. The biggest conversation I had with myself was really just honing in on what makes me the happiest – and one of those things was performing music in a full-band setting. I missed it immensely – I’d been doing a lot more acoustic based stuff  the prior five or so years, and although making music in any capacity is rewarding and cathartic, there’s just something about jumping on stage with some of your best friends, plugging into an amplifier and making noise in front of an engaged audience. So I kind of just asked myself – why not just do it again?

It was kind of a kick in the ass from me to myself. I did things a bit backward – I recorded the album before I had the band. I did that because there was just a lot I needed to get off my chest and it felt most appropriate to do that on my own, but also so we had music to just start playing together when I found the right crew to do so with. Some of my happiest times playing music were when it was casual, in a dorm room or a garage. And so this experience really forced me to go back to my roots and make music for music’s sake. I kind of took off my self-critic hat and just performed the songs. I didn’t care how I was playing necessarily, but moreso what and why. I think having that perspective change really took a lot of pressure off of myself and allowed me to really have the most fun I’ve had in a long time playing music. I don’t say this a lot, but I’m proud of myself for that.

You’ve just signed with Mint 400 Records, is that something you ever thought would happen when you started the project?
MD: This whole endeavor was initially a fabrication in TJ’s mind, before any of us were involved. But as Jordan, Chad and I were brought into the fold, we all quickly realized we had stumbled upon something special. Originally a one-man studio project, E.R.I.E. quickly turned into the four of us planning tangible goals. Pitching a re-release to labels was a side effect of the pandemic. The album TJ wrote is glorious, and for it to become a casualty of 2020’s nonsense wouldn’t have been fair to the art. After throwing out a bunch of “dream labels” we were clued into Mint 400 and were hooked after an introductory call. We couldn’t be more excited to partner with Neil and Mint 400.

Your new album, ‘Don’t Wanna Live, Don’t Wanna Die’ was recorded at home – did you have a routine for your creative process? Get in from work, get the headphones on, get writing?
TF: I wish I could give you some awesome insight into a ‘studio routine’, but the truth is, I’m terribly disorganized in my studio. Haha. But that’s just how I function – I tend to thrive in ‘organized chaos’. I did a lot of my work late at night and on the weekends. My main goal with this process was to keep it fun and not stressful (like recordings can often be). So, I just kept it loose – worked when I felt inspired, not overanalyze every take and just let the songs speak for themselves.

The album tends to be quite blunt about reality, but in doing so, often leans on hope. What draws you to being hopeful and positive in your writing?

TF: You know, it’s kind of funny. I’ve been writing songs for over half my life at this point, and up until now, I don’t think anyone would’ve ever described my songs as ‘hopeful’. Self-pitying, depressing, cynical… that might be a bit more accurate. Haha. But, when it came time to write this record, I told myself I wanted to get away from all that however possible. For starters, I thought it would be helpful to get out of a comfort zone. But more importantly, I thought that if this was the last record I ever made, I would want to leave behind something hopeful and inspiring, not just wallowing.

MD: Hope is everything. When you are in the darkest corner of your mind, sometimes that glimmer of hope is the only thing that you can cling to. It’s important to remember that even if you don’t see it in the moment, that hope is there.

Vice versa, there’s a feeling of being slowly overcome by the world across the new LP. How important was it to address issues like mental health and society in the U.S.?

TF: It’s probably the subject that pops up most in my songs. I’ve struggled with my mental health for as long as I can remember – of course, there are times that are better than others. But specifically at the moment, society is pretty fucked up here. I know that’s kind of the cases in a lot of countries across the globe, haha. When things are pretty heavy like they are currently, it can definitely add fuel to an already anxious fire.

MD: Mental health and challenges with it are incredibly stigmatized not only in the US, but globally as well. I feel there has been some headway made domestically, specifically now, as people are talking more about ‘not being ok.’ It’s so incredibly important for everyone to know that feeling is not only normal but also ubiquitous to everyone at some time or another. By verbalizing his own struggles, or challenges, TJ is able to add one more voice that can speak to someone who maybe needs to feel related to, not alone. Selfishly, ‘Fire Away’ was that track to me. TJ sent a draft of that song to me in early 2019, and I was coming off a year that completely turned my life upside down, and I was pretty damn far from ‘being ok.’ Right from the jump ‘Last year was a s*** storm for the ages…‘ I knew that feeling. I was living it. And I felt less alone. That song remains an important turning point in my own struggle.

Finally, what’s on the horizon once the records out?

We’re trying to find opportunities to play these songs live and have also started writing new songs together. That is already exceptionally exciting, as the four of us bring such a diverse background to the table.

TJ: Yeah, we’re in the early stages, but I’ve already got about 20 or so voice memos kicking around with the guys. This will be the first time we’re all writing as a unit, and despite having to do it in separate rooms, it’s all feeling very communal already. It’s been good to have a creative outlet whilst our country is falling apart, haha.