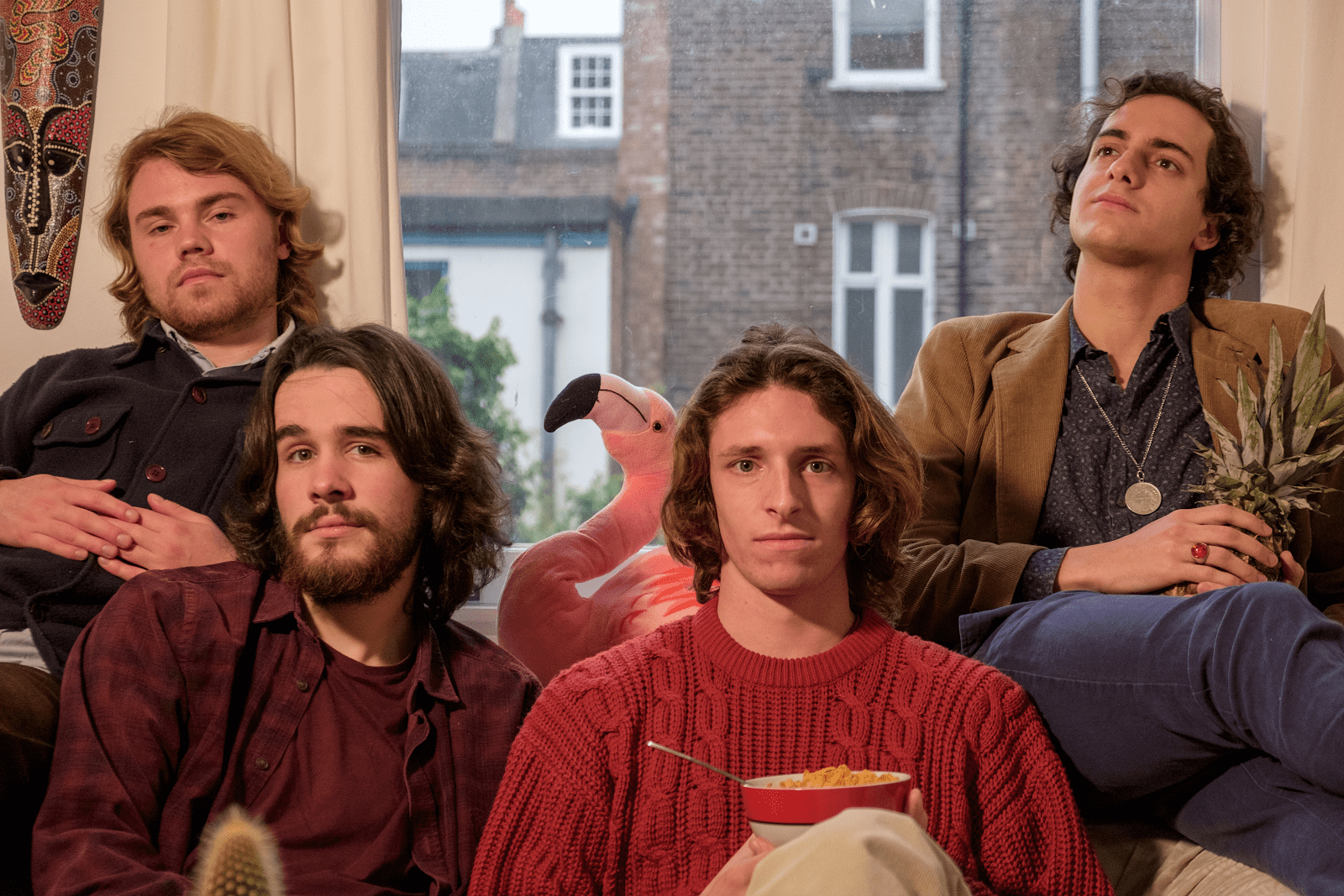 There’s an eccentric energy about the four-piece band Sourface. Get their curated playlist on Spotify on shuffle and you find Gil Scott-Heron alongside Tunisian funk, followed by Mac Miller, some bedroom pop, then Paul McCartney.  It shouldn’t work, but it confounds me to say that it does.

In the kindest way possible, this ‘against all odds’ theme is ironically common for vocalist Ludo, drummer Tom, keyboardist Matt and bassist Alex. In this most inopportune time – where gigs are cancelled left and right – Sourface are making a doggedly determined debut. Their fresh take on life and music is a glimmer of light in the gloom that is 2020 so far. To make their EP, Daytime’s Past, land, the four continue to perform socially-distanced sets in both London and Paris. Somehow though, Sourface are making it work.

To cut the story short, we met at a fake wedding…

It helps their cause that their two released songs, ‘Sweet Dreams Suburbia’ and ‘21st Century Man’, are fun and light dishes with a vintage palate, renewed by a modern bedroom pop sound.

The eclecticism continues when you find out how they met: “To cut the story short, we met at a fake wedding,” Ludo says indifferently.

“The ceremony – which was basically a piss-up – was for a man and another man dressed in drag,” Alex explains. “The band were too ill to make it, so we stepped in as the replacement at the reception.” They paint the picture for me: huge sparklers, Tom on a makeshift drum set made of kitchen utensils, Alex dressed as a nun, and Matt as the hype man. It never should have worked, but it did.

“It was kind of inevitable that we started the band from there,” Tom says. “We were at a point where you couldn’t remember the last 48 hours, playing pots and pans with three people you’ve never met. At that point it’s like destiny, it must happen. It’s obligatory”.

Having Tom define Sourface’s birth as some external force pushing them together, I ask whether when playing that first time they felt some instinctive connection. They all laugh and he jokes, “It was pretty trash to be honest.”

“For about a year after that we played covers, and it was about this time last year that we said, ‘Alright, let’s stop messing around and make something of this’.

“We then recorded six demos in four days,” he says, and shrugs, as if to say, ‘No big deal’. That was then the germ that spawned Sourface. “The only thing I regret about those demos is that we weren’t all together.”

We’ve never had the luxury to take our time.

Sourface are now a unit. There are no clashes of character.  Instead, decisions are made together. Promos, photos, everything is done together. I was even refused an interview until all four members could attend. It’s refreshing to talk to a group so surprisingly stubborn to uphold this: “There’s no point [of an interview] if it’s not the four of us,” Alex says. I’m taken aback, but far from offended.

It’s been a slow trudge for the four. Managing university degrees and having to compete with an infectious virus has meant starting out has been two steps forward, one step back.

“We managed to record ‘Sweet Dreams Suburbia’ and ‘21st Century Man’ professionally around July 2019,” Matt goes on. “Everything was ready to go, and then we all headed off to different countries for our [university] Year Abroad.”

“Basically, just imagine us ready on the starting line and then being shot in the foot,” Tom quips.

“In all fairness, working on the project remotely probably set us up pretty nicely for Covid,” Ludo reasons, and they all nod in agreement. “Despite everything, the stars really aligned to get us here,” Tom says. I could listen to this unflinching optimism all day.

Metal strings will twang at you on playing ‘Sweet Dreams Suburbia’. With each strum it tugs you into nostalgia, dropping back into a simpler, more normal world. It’s hard not to fall into its allure.

“One thing that listeners might not realise is that everything to do with ‘Sweet Dreams Suburbia’ was created in a matter of days,” Tom says. Where other groups deliberate and ponder over a demo for months, I ask how they pull off this feat.

“We’ve never had the luxury to take our time,” Ludo tells me. Time became their most desired ingredient for curating Sourface as the pressures of lockdown, university and years abroad reigned over.

“Every time we do get the chance to play together, it’s intense.”

Sourface are also part of a brand new and exclusive club – but unluckily this is not a club you’d want to join. It’s a club of artists obliged to perform socially-distanced. Gigs like this are the closest we can get to pre-2020 life, but still the sight of separated seats and rampant face masks doesn’t lose its absurdity. It’s equally strange for Sourface.

“Performing is very different.” Having everyone sat down, the reception to their performance is unsurprisingly mellowed. “It could be worse,” Tom says, “it could be that we’re not gigging.” It’s tragic to be writing down this transcript a week later now that we’re back in lockdown. Oh, to be out of lockdown…

The five songs in our EP are all individually their own small world, but our overall theme for them together is something that’s fresh.

Working in such adversity is an achievement but persevering on any artistic project is a feat in itself. It requires resilience, patience, and a strong belief in its merit. The driving force behind this one is simple: it’s fun. “When we work on music there’s always something to do. There’s always energy there, so we just do it,” Matt tells me. “It’s always bubbling along and we’re never really stopping.”

Sourface are earnestly keen to show who they are. It seems the four have only viewed their past obstacles as trials that have evolved their sound into something more than the sum of its parts.

“We’re defining our main themes. The five songs in our EP are all individually their own small world, but our overall theme for them together is something that’s fresh.”

Sourface are sitting on their new EP, Daytime’s Past, due to be released in December. Above all, they’re here to have fun. Have a listen, I’m sure you’re due some of that.

Listen to Sourface on Spotify, and keep an ear out for that new EP next month.