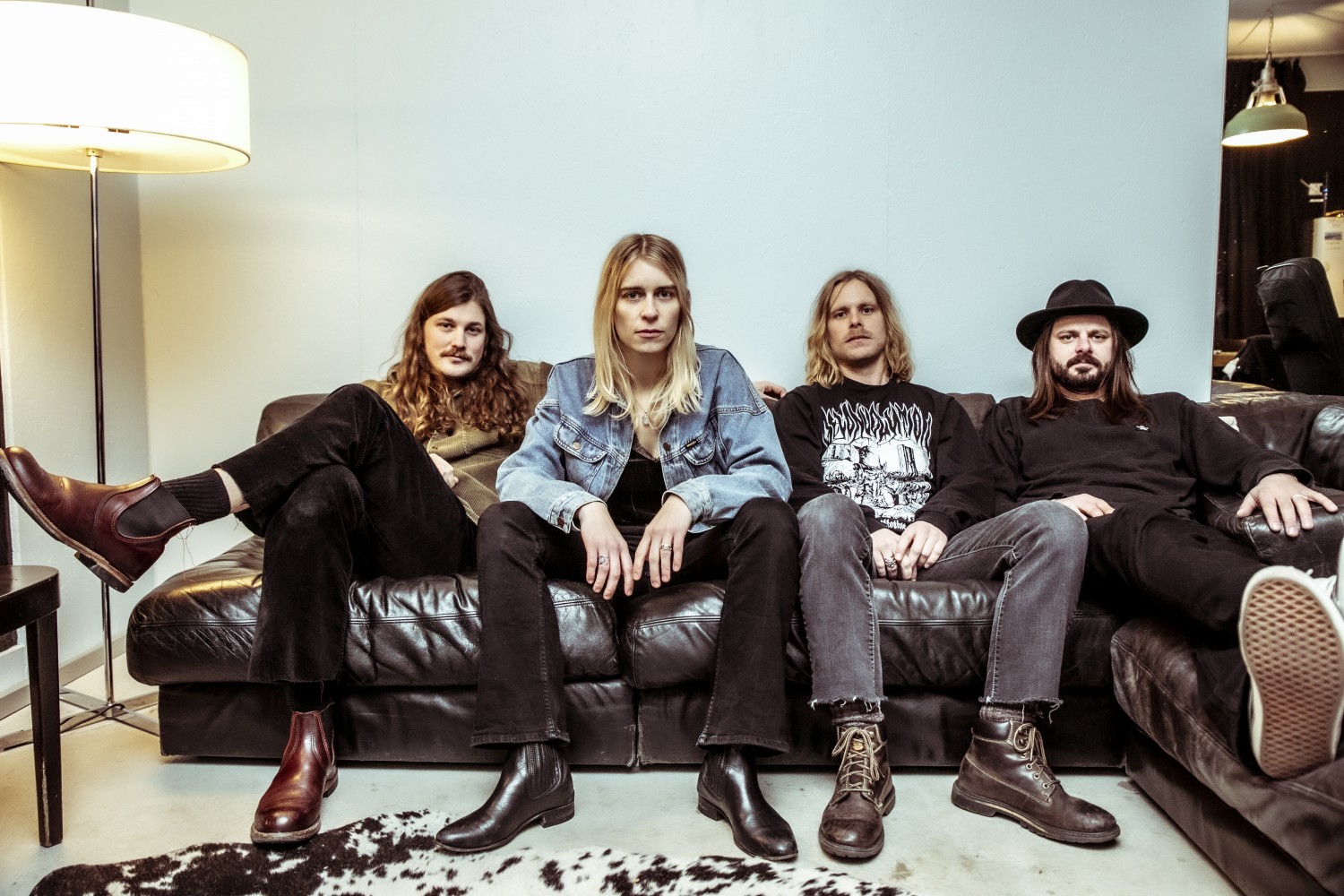 Grunge has long been a sleeping giant. Born in Seattle and optimized by bands like Soundgarden and Nirvana, the trend which blew up in the mid ’80s has since been dormant for a good while. However, the mark that this trend left on the music of the past 20 years is massive. Grunge sounds have long continued has the foundations of some of the best psychedelic and rock bands.

Annie Taylor are another chapter in the development of grunge, their debut album Sweet Mortality fusing their early poppier rock sound with a heavier grunge tinge. Vocalist, guitarist and owner of one of the coolest names in rock, Gini Jungi and I chatted all things Sweet Mortality, Switzerland and lockdown.

Releasing your debut record is the first milestone for any young band, something all artists strive to achieve. However, the bands of the last six months have had their releases marred by issues with promotion, the lack of live shows and delayed release dates. I wondered how lockdown life had been for a Swiss band in Zurich.

“For me, the start of the lockdown was a bit rough,” Gini begins. “We were just about to go on tour and we planned to drop our debut album. Like everyone, we had to reschedule our plans, which sucked. But after accepting these higher powers, the past few months have felt really good. The pandemic slowed down life and I started to appreciate just staying at home again and taking care of loved ones. But I guess not everyone had such a peaceful experience the last few months,” she acknowledges.

Luckily, the album was written and recorded pre-COVID, so the band weren’t affected by any distancing or sanitizing measures in their studio. Having been sat on a lot of songs for a while, the band are experienced studio-goers, but recording an album involved a new and different type of involvement.

“It was the first time for us as a band, where we were there as ‘clients’. Usually we recorded with students who had to practice or with friends, so this was a great experience! Our producer David Langhard made us feel very comfortable and we had such a great time at the Dala Studios. It’s a very welcoming studio, with loads to discover: old vintage gear, guitars, weird books, 100 different ways of using an ashtray, cute cats…”

The album is like coffee: there are different types of coffees, some a bit sweeter with more milk and others strong and dark…

The pressure of being stuck inside was something that was significantly talked up throughout lockdown, and for a band who are sitting on a debut album they are waiting to release, I was interested to know what Gini had done with her time.

“I was playing a lot at home and recorded several new possible songs and I am very excited about showing them to the boys! The past months also brought the opportunity to work on my bass skills. This was the first time I started practicing bass, but it felt so good and I am really enjoying it!”

Annie Taylor have done their best to adapt to the ongoing global situation, using their situation to benefit themselves, especially in their promotion. “It was definitely different than expected,” Gini comments. “We had to stretch the promo for a few months and used that time to do some more videos, which was fun.”

The videos the band have released, especially for song ‘Where The Grass Is Greener’ are visually amazing, despite being shot in lockdown. “Tony Accosta is the man! We wanted to make a video on our US Tour, but since it got cancelled due to unforeseen circumstances we had to give this project out of our hands. Tony got these really funny ideas with the dog and filmed everything on super 8. We are super happy with the result!”

The album is a wonderful blend of the raw, punchy engine of classic grunge, but the songs are pulled away from full-tilt with moments of tender song writing, something that on the surface seems difficult to marry.

“All the things you have experienced in your life usually have a melancholic but also an encouraging, energetic side. It’s the same with songs. Sometimes they are driven by energy other times by emotional feelings. So, to bend between these experiences was feeling kind of natural. But it was difficult though to pick the right songs, so they would make sense together on an album.”

There is a myriad of genres blended throughout the album, with elements of Garage, Psych and Blues all intertwined as a paintbrush painting vividly on a grunge canvas. It’s hard to quantify simply: “Maybe I would say the album is like coffee: there are different types of coffees, some a bit sweeter with more milk and others strong and dark. It was important to us, to make an album with a lot of diversity in it. Some of the songs are fast, energetic and rough and others are soft and melancholic. I guess this is the mix that defines us.”

There are a lot of great bands in Zurich and there is wonderful support between the bands.

The Swiss music scene is one of Europe’s more niche, but has still produced some massive artists. I personally know very little about their current industry, and so was intrigued to see how the nation, and Zurich as Annie Taylor’s base had been an influence on them, and if there were any bands with a similar feel to them.

“Bands which are kind, good-looking and humble? Then yes! Haha, just joking. I think we are in general influenced by the people around us or by things we like, but not necessarily by the scene in our city,” she explains. “There are a lot of great bands in Zurich and there is wonderful support between the bands. I think this is also because our label, Taxi Gauche Records, connected a lot of local musicians with each other.”

The scene itself is propped up by some of Jungi’s favourite venues: “There are a lot of great venues in Zurich that are hosting great bands! One of my favourites is Bogen F. They always have a great lineup and it’s a fantastic place to play a show. I think the first time we played there was with Sunflower Bean. But also, Rote Fabrik, Dynamo or Exil are venues you should check out when you stay in Zurich. All of these venues were really kind to us and invited us to support several bands on tour like L.A. Witch, FEWS, Press Club and so on.”

Something that seems so far away for the UK is the return to normal life, which includes the return to live music, but it seems that Swiss bands and gig-goers will be able to fill these venues soon, as live music is already starting to return.

“You can already play shows again and we just played our two sold-out release shows this weekend! It feels great to be back on stage, since we were rehearsing a lot but without perspective… There are a few more dates coming up in Switzerland and we hope that things are normalizing, and venues are surviving these difficult times. We are more than excited to go on tour early 2021 and hope this will work out somehow.” Jealous? I am. You should be.

What is hopefully soon to be an exciting time for all music lovers across the globe has started in Switzerland, and Annie Taylor are there to run riot and continue their psychedelic-grunge odyssey. It would be worth your while to risk a fourteen day quarantine or enjoy a Swiss sabbatical to Bogen F to see these guys, trust me.

Listen to Annie Taylor on Spotify to check out that new album.