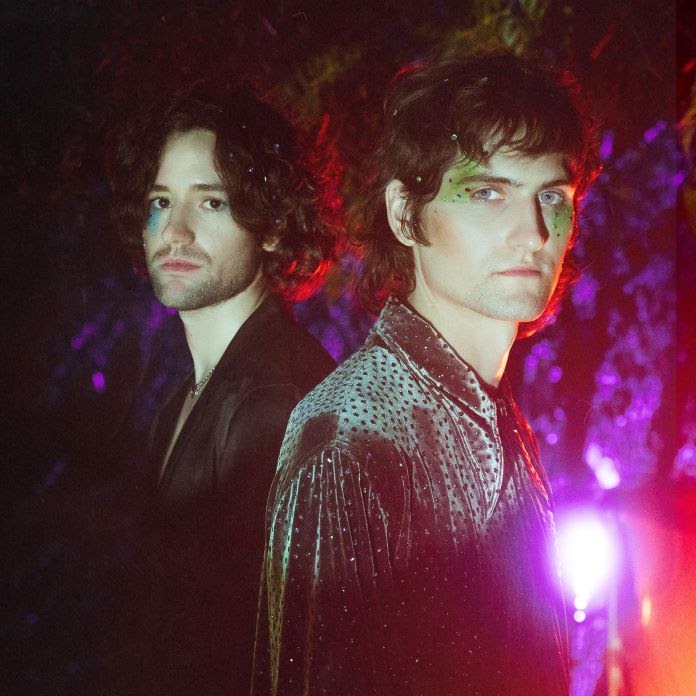 The two names you need to know behind Sports are Cale Chronister and Christian Theriot. They’re the alchemists of a special blend of indie R&B fused with synth-pop over three albums, but despite this experience, it’s taken them some time to acclimatise to a new release cycle that’s left them staring at screens.

Sports are refreshing to speak to because they’re just like everyone else. They worry about meaningless things. They giggle at inappropriate words, and try not to take themselves too seriously. Seeing as their namesake comes from a distinct lack of sportiness, it basically comes with the territory.

Cale and Christian are lifelong friends that have been playing and growing together since primary school under different monikers until they broke through as Sports in 2015 with their first LP, Naked All The Time.

“We actually just did a re-pressing of it, and the test pressings got sent to my house,” Christian says. “I hadn’t listened to it in a while, especially on vinyl, and it felt like I was listening to it for the first time – ‘Panama’ especially just sounded so crazy. I love the way it sounds”.

“I don’t think we had any idea the response it would get. We threw it up on Spotify because we thought that’s what we were supposed to do. Then ‘Panama’ got on Fresh Finds which sent the algorithm off and we ended up on the US Viral 50. We were freaking out. It almost felt like a prank!”

Five years later, and “Panama” remains one of their most well-received songs. For a song that’s sung with such enticing languor and played with care-free instrumentals, it isn’t hard to see why. Cale sings as if he’s got one eye on the pool and another on the ice cold fridge, so when you listen you feel as if you’re vying for his attention. It’s undeniably tantalising.

I’m trying to be more confrontational about things when I need to be; [Get a Good Look] feels like a big experiment to trust myself again.

Sports then rode the buzz of Naked All The Time to release People Can’t Stop Chillin, and Everyone’s Invited, their subsequent projects. Now, they’re ready to blaze new trails; it’s an era of psychedelic sensibilities for Sports, first marked with ‘Tell You Something’, their first release in two years. Lyrically sensitive, it touches on relatable themes of self-deprecation that tame its poppy instrumentals. Synth bops ‘Baby Baby’ and ‘Never Know’ followed, together making the first three singles of Get a Good Look Pt. 1.

“I’m trying to be more confrontational about things when I need to be,” Cale says. “[Get a Good Look] feels like a big experiment to trust myself again.”

“This will be the first project we’ve done as just a duo. It’s for us,” Christian adds.

“I wrote ‘Never Know’, ‘Baby Baby’, and our new single ‘The Look’ in a week, and it was the week we got our mixes back for Everyone’s Invited. I remember feeling so ready to do something new,” Cale expands.  “We’ve been working on [the singles] for a year and a half ,so it’s hard to pinpoint how we got this new direction. It’s a slow, evolving thing.”

“It feels like the universe hands me something sometimes and I don’t want to fuck with it too much. We just guide it along. The more I try to control it, the worse it goes; the more I have no expectations, the more I make something I’m excited about.”

Last year, the two confronted the prospect of the pandemic by focusing more on their new project, a chance they wouldn’t have otherwise: “We’ve really had a chance to take our time with these songs.

“In the past there has been a tour and we’ve been pressured to get the album done before the tour. Admittedly, that meant some songs before didn’t get as much attention, or maybe we wrapped things up because of deadlines, but now I feel like every song off [Get A Good Look] got an equal amount of time.”

‘The Look’, out today, is a disco-dense track off this new record, and it’s vigorously addictive and tirelessly dance-worthy. It captures the buzz of pre-show nerves in its verses and the feeling of the spotlight in the choruses. Melodies bounce high and low against steady bassy bumps: it’s kept some nuggets of classic Sports with elements of their new selves thrown in.

Touring is the part of the job you dreamt of doing when you were a kid.

“‘The Look’ was inspired by a comment a stranger made to me while I was out eating lunch,” Cale says. “He interrupted me and asked who my agent was, assuming that I was a model. And then wanted to help represent me. I just kind of laughed because it seemed like such an L.A. cliché. But he was serious and told me, ‘You’ve got the look of the moment’.”

Despite keeping their heads down with making the album, Cale and Christian can’t help but feel withdrawal from performing: “It feels weird releasing songs and not being able to tour. It’s a fulfilling part of the job… and we’re just missing it. Touring is the part of the job you dreamt of doing when you were a kid,” Cale tells me.

“It’s also just a way to engage with the fans in a more intimate way, and releasing digitally and using social media to interact is great, but it’s not the same as playing a show and seeing fans sing the lyrics, then getting to meet them afterwards as well.” Christian says. “I just really hope we get back to it soon”.

Cale agrees: “We’re really missing that fulfilment,” he says. “I’m looking at screens more than ever for that same fulfilment: reading comments, looking at how many likes and streams we get… It’s all we have.”

“I try not to look at stream numbers as well, but the truth is I do. I check the Spotify for Artists page multiple times a day. It’s fun though, you can dig around and find some cool things… you can see the names of playlists your songs are being put in. There was one we found the other day that was just so dirty,” Cale sniggers, “I don’t want to say it out loud”.

He did end up telling me its name, repulsed as he was. For the sake of integrity, it’s best left unwritten. I’d now think twice about how you name your playlists.

‘The Look’ is out on streaming platforms today, and Get A Good Look Pt 1 is out on February 12. With each new single it’s quickly shaping up to be the perfect soundtrack to your kitchen disco. Get your dancing shoes on already.

Listen to Sports on Spotify and Apple Music.