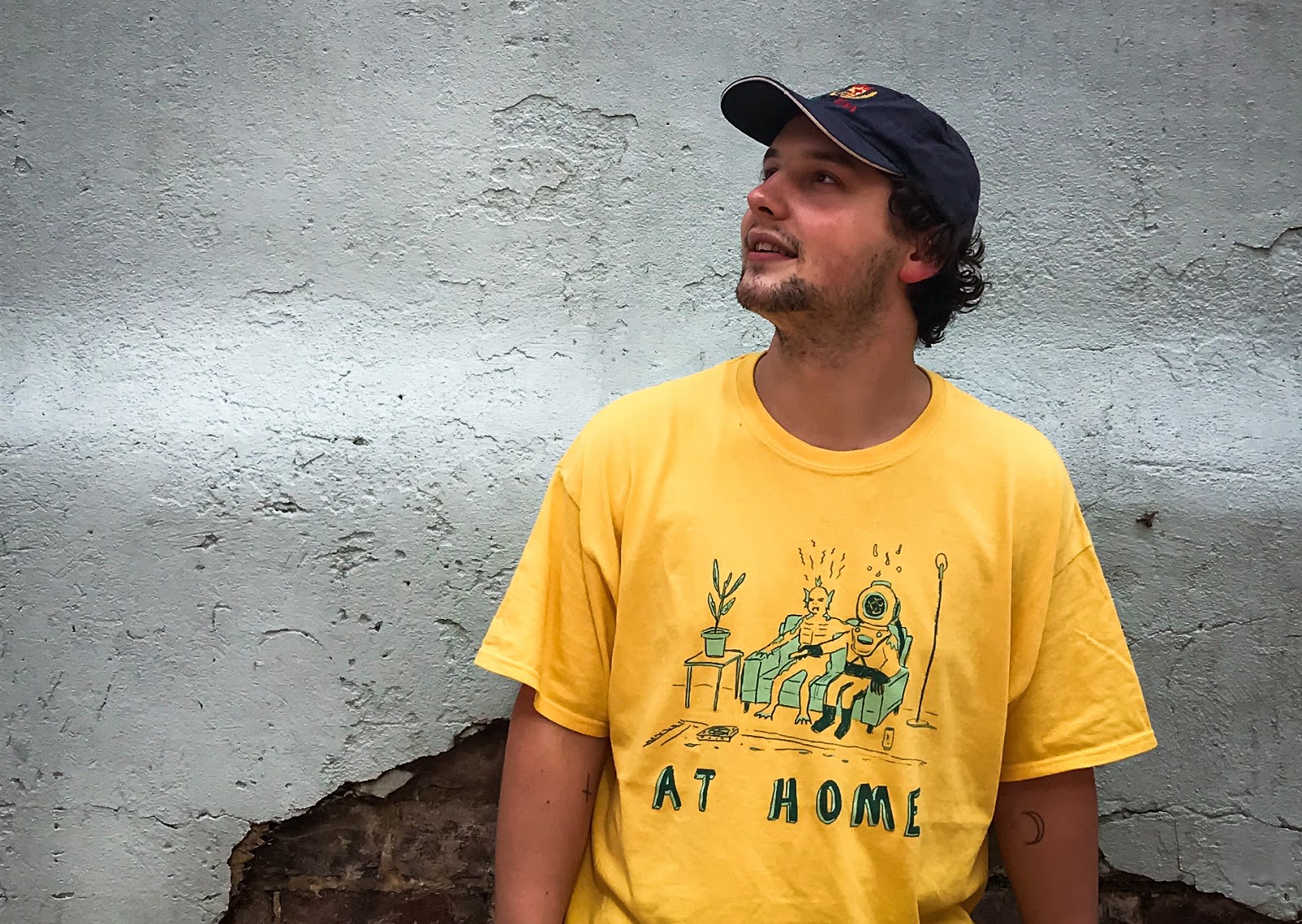 elkyn takes us downstream through musicianship, melancholy and Middle Earth

I like to think I can play guitar. Sure, I know the notes, I know the chords. But then someone like elkyn comes along and wears his heart so far down his sleeve that it’s plucking the strings, and it reminds you that a real musician is so much more than their technique.

elkyn is the moniker for twenty-something Joseph Donnelly, whose value of family, love and relationships is deeply ingrained in his work. In July 2020, he released Beech, his first EP; it’s a collection of songs that simultaneously burden and unburden you, and by its end you feel empty and whole all at once. Donnelly’s music is so atmospheric that the better word to use would be ‘world-building’.

It took no more than three minutes before we were collectively gushing over the greatest world ever made, Middle Earth. I never got round to asking, but it’s clear that elkyn’s knack for expansive writing comes from love of epic fantasies.

Showing little bits to my family really helped me to pluck the courage to release my music.

“When I was about 12 or 13, I first learned how to play guitar just so I could play with my brother,” Donnelly says, speaking of his influences. “Back then I listened to a lot of Noah Gundersen, but now I’m drawing a lot from Lomelda and Slow Pulp.”

“I first started writing in the back-end of sixth form, just before I went to uni,” Donnelly tells me. “I was in my brother’s band [Epilogues] at that point, and I only used to show him my writing. He’d always come back and say, ‘That’s mint,’ and it took until my first year of uni when he said: ‘You’re not playing in Epilogues any more. You need to go and do your own thing. Go and record your work and I’ll do it with you.’”

“Showing little bits to my family really helped me to pluck the courage to release my music.”

“It’s funny, I actually released Beech years ago. When I first released it, I didn’t tell anyone about it and put it up on Bandcamp and just left it there thinking, ‘I’m not gonna do anything to it’. I shared it to Facebook once and just left it. This time I was a lot more confident trying to get gigs and playing on my own.”

“I was terrified to start playing in front of people by myself – I hated the idea of it. Even now, I still struggle to get into the swing of playing”.

‘Something’, out today, is certifiably elkyn. It tugs and wrenches at your insides as it wraps around you at the same time.  Soothing you, his voice floats from lyric to hum from start to finish as it’s landscaped across instruments that resonate together. ‘Something’ is a calm river, and you’re the driftwood.

To write such melancholy music takes a toll on the musician. “It’s tough playing emotional music,” he says, “there’s a lot of personal stuff in my songs.”

“I definitely find it mentally taxing to write and perform, especially with [Beech]. That was the first time I’d written sad songs. When I went off on tour with Love, it was the most I’d ever played. Every night I was performing all this stuff that’s just really fucking depressing. Night after night, I had to keep going. It’s always worth it though, especially when people enjoy it.

“It’s funny to hear how other people took the song I wrote and what it meant to them. They tell me they listened to it when going through tough times.”

“Even if just one person comes over afterwards and says how much they enjoyed it, it makes it worth it,” he says with a beaten smile. “I don’t think I’d still be doing it if they didn’t.”

It’s been tough, but I’m more hopeful for the future and what’s gonna happen.

The trick to getting through lockdown has been to appreciate the little things: recognising the bits of the day that help us to get through them. Donnelly reflects on life stuck indoors.

“Lockdown has been good in some ways because in the past there have been times where I’ve had to take six months out and not played any gigs so I could write instead. Now, I don’t feel any pressure to go out and play live music – I can really get [songs] perfect. I tend to write by leaving things almost finished for months, so it’s been nice to have the time now”.

Whilst the pandemic is rages outside and we’re still locked in, elkyn takes solace knowing the storm is near-weathered and that clearer days aren’t far off.

“Not to get too deep, but I haven’t loved a lot for a while. Lockdown’s been horrible, but things are getting better. It’s nice because I’m starting new relationships with great people, people I know but never met in real life. We’ve talked about playing shows together or making music in the future. It’s been tough, but I’m more hopeful for the future and what’s gonna happen. That thought keeps me going.”

Have elkyn whisk you away with his latest singles ‘if only it was alright now’, and ‘something’ – out today – on Spotify and Apple Music.