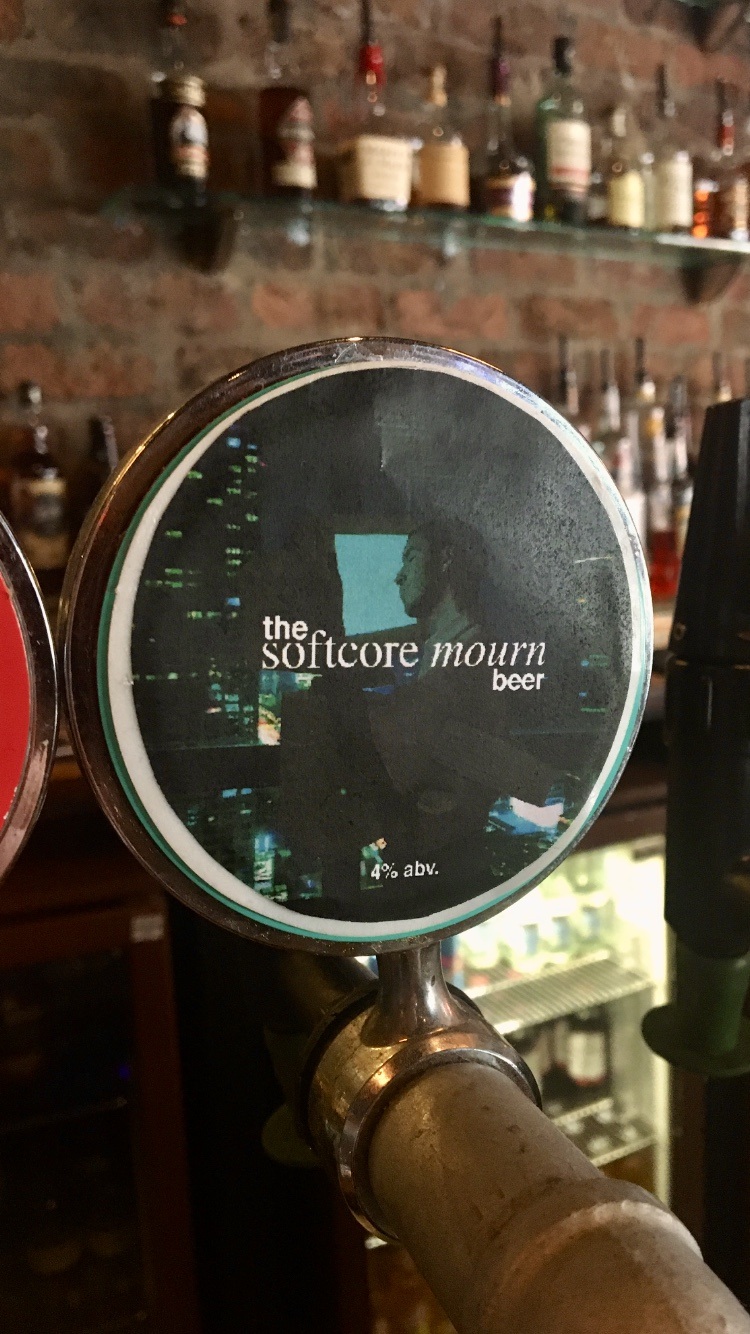 pizzagirl: Catching up with friends

pizzagirl’s demeanour is best compared to a spinning top – skittish and frantic, but a whole lot of fun. Sat in The Shipping Forecast – where pizzagirl will play in a few weeks – Liam Brown (the brains behind pizzagirl) is centre stage of the pub booth, jumping between topics effortlessly and joining the dots of our conversation through charm and quick wit.

After a quick catch up, we eventually settle on star signs, which he discusses with understandable skepticism. “I know I’m a Leo, but nothing other than that,” he laughs. “Though Shawn Mendes and I were born on the same day. It’s spooky,” he laughs.

Nevertheless, the stars aren’t the ones who brought us here today – it’s pints that did. We’re all gathered to celebrate the launch of Softcore Mourn Beer, Pizzagirl’s own album-themed larger. After a sip and a slight smirk, he gives a satisfactory nod.

“It’s a very exciting promo,” he remarks, after tasting the fruits of his efforts. “It feels like an interesting way to celebrate this milestone that is Softcore Mourn. Not many artists can say they have a beer, so nice to have a visual indicator of the music!” he pauses, before a grin emerges. “Though I tend to be a Guinness guy normally, I’ll be drinking this from now on. Going to be very strange asking people if they wanna come for pints of my own beer!”

As we delve into the conversation, the artist blends into the small venus scenery, chatting about local venues and musical acts with ease. His comfortability is expected; pizzagirl is something of a spearhead for the local scene.

Liverpool gigs are more like a family party because it’s all your friends and your loved ones.

“Liverpool gigs are more like a family party because it’s all your friends and your loved ones,” he remarks. “I always love playing here, so it should be interesting. Like, I want everyone to be in high spirits and drinking and partying.”

Despite the jubilant celebration emenating from Liam’s answers, the conversation is quickly covered by a dark cloud of disappearing venues, and the heavy truth hangs over our heads for a brief moment. In recent months, mention of the city’s music scene is always followed by its ever-changing nature. With more venues closing than ever, it’s apparent how much the gig scene in Liverpool has suffered, but, true to fashion, the artists find a silver lining in the losses. “‘Birkenheads’ becoming the future, especially Future Yard,” Liam concludes, optimistially. “It’s probably going to be the next big thing. It’s a mad place, because it’s like five minutes away from town so everyone can reach it. The developing scene there is so lovely to see. I’m hoping that maybe we can get a show there soon, show Birkenhead what they’re missing!” he laughs.

When talking of his origins, the conversation naturally turns to his record label – North West tastemakers, Heist or Hit. A breeding ground of fantastic new artists, including Her’s, Hannah’s Little Sister and jwestern, the label’s roster is almost as impressive as their renowned likability, known for their incomparable charm and warmth. “We’ve been together for years now – I’m probably their oldest act,’ the artist remarks. “So it’s been a very amicable, lovely relationship, really good for my musical progression. They let me be exactly whatever I wanted to be at the time and that’s a very good hallmark for a label. I think there might be some artists that need a bit more of a gentle push, but the whole team is excellent in helping get musicians started. I love working with them, they make me feel really excited about music. Even now, after all these years. I’m like some old guy now,” he confesses, sipping his beer slowly.

Looking over your shoulder at old music can be very romantic at times… But you always have to keep moving forward.

With a light fizz, a tad of bitterness, and buckets of flavour, the pint’s taste palette is not too far off from its namesake – Softcore Mourn Pizzagirl’s latest album. Delving into the world of electronica filled, synth madness, the album pulls from a nostalgic sense of 2000s soft-rock, far different to the artist’s previous sonic endeavours. However, the change, though unexpected, is welcome as a natural progression of his sound. “Looking over your shoulder at old music can be very romantic at times,” he says. “But, you always have to keep moving forward. A rolling stone gathers no moss and all! Softcore Mourn reminds me of early The Strokes, I was very inspired by that sound. Them, Randy Newman too – the way he writes is so interesting because he writes in personasl.”

However, while an evolved sound is a new facet of Softcore Mourn, what remains throughout the entirety of the artist’s work is pizzagirl’s emotional vulnerability. Known for his candid wit, each track is melancholic in nature, hiding truths about heartbreak, lost friendships and questioning yourself atop brash synth-pop sounds.

“The album is all about being young, not really knowing what you want and figuring it all out,” he explains. “Every song has got some level of melancholy or a little bit of sadness about a specific time and person. But even though it’s predominantly centred around a breakup, it’s also about realizing that during that time you can be pathetic, and be a really bad version of yourself, and still not know what you’re doing exactly. Maybe when I’m 60 I’ll figure it all out, and I probably won’t make an album because I don’t need to say anything,” he smiles.

Despite the rawness of the album’s subject matter, pizzagirl still finds ways to build mystery throughout. As we turn to talk about audience reaction, it becomes clear that the artist intends for each listener to build their own meaning from his tracks, no matter how far removed from the original intention.

“It makes me laugh, because I always speak in such metaphors that people might not know what I’m saying. It feels like an inside joke between me and myself,” he spills.  “There’s a tune called ‘By The Way’, that’s about like, watching jeopardy… It’s a very emotional memory to me so that comes through, but no one would guess that from the actual activity. I like the idea of my music being very relatable in feeling, but vague specific details. If you’re listening to a song and it’s about to break up, you can relate to it, even though it’s not your breakup – you’ll still have similar experiences and your own sadness surrounding them,” he ponders this briefly. “It makes the song have a lot more weight to it. I think that that’s what makes me extremely happy, when someone can take something that I felt, but also come to their own understanding of it. It makes me feel a bit more connected to the world, rather than speaking over the masses,” he admits, knowingly.

But, true to his restless nature, as soon as talk around Softcore Morun subsides, the artist is soon delving into the future, and his next body of world. “I’m already into album three, so Softcore Mourn feels like a distant memory,” he remarks. “The next album is very banjo heavy, far different to anything I’ve produced before. It’ll be exciting to work on new stuff.” Here, he grins a grin that seems to signal to the future, where possibilities remain endless. “I also want to learn how to cobble…” He smiles “I would love to make shoes. So hopefully in the future, I’m still alive, still making music, and making shoes. That’s the real dream.”

pizzagirl is on tour next week, playing shows in London, Liverpool and Manchester. Last remaining tickets available HERE. Like this? Why not check out our print mag, available at www.therodeomag.com/shop/