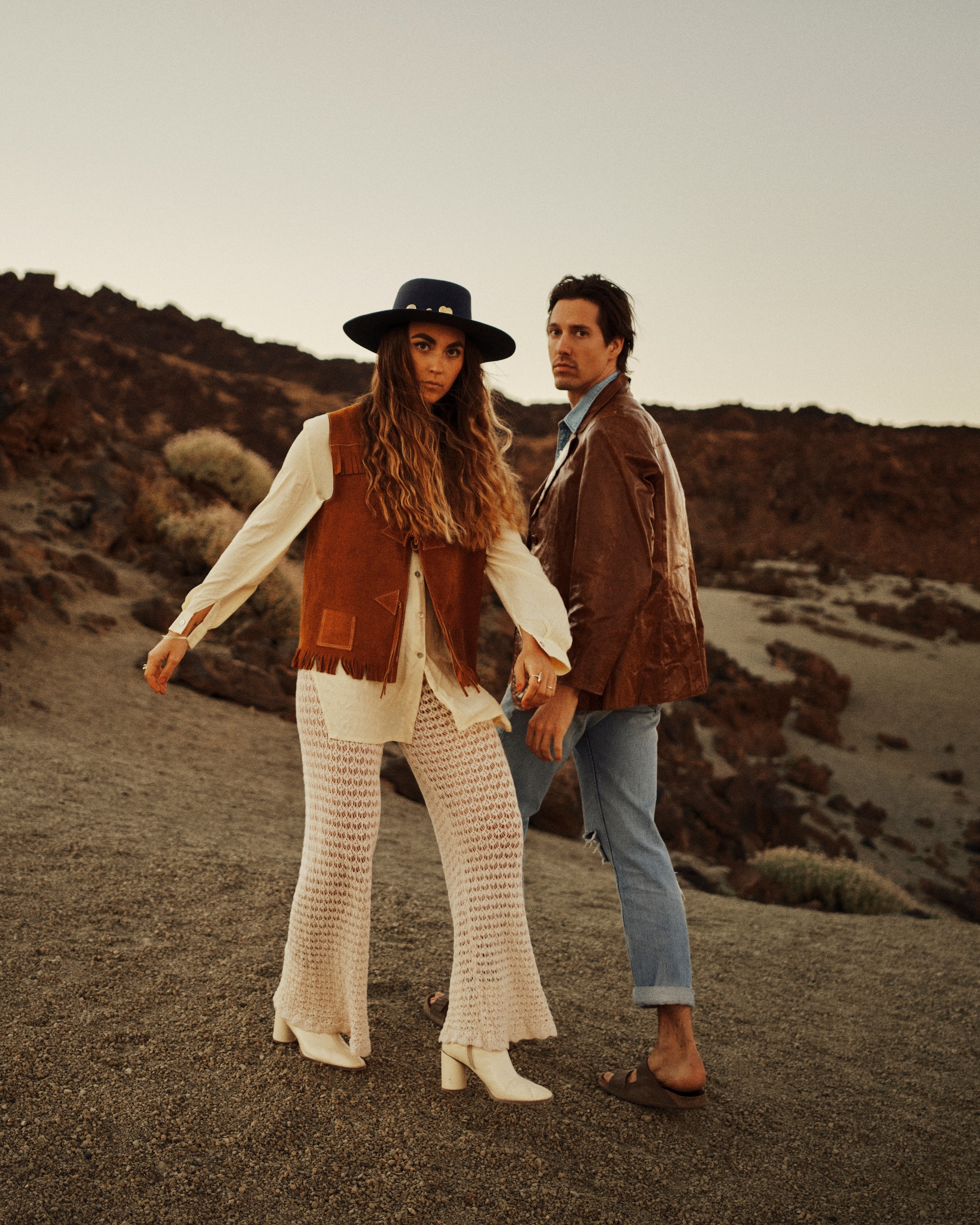 Calling on influences from film scores and praised as the ‘biggest discovery of Primavera Sound Festival’ by Rolling Stone, Cari Cari take their fans to ‘Kookoo Island’ on their upcoming album. I had the pleasure of discussing their origins and musical journey with the duo.

To our readers, can you explain a little about the band’s origins? What brought you together as a band to make music?

Alexander Koeck (vocals, guitars): I had a band at the time and discovered Steph’s music online. I had a little home studio in my parents’ basement and asked if I could record her. Somehow, I managed to sneak into her band without her noticing (laughs).

Stephanie Widmer (vocals, drums, didgeridoo): We both never had proper training as musicians, so it was all very wild and DIY. I literally sat behind a drum kit for the first time one week before we recorded our first EP. It was great! Good times.

The folk-psychedelic-indie combo is an extremely interesting stance to take on your latest single ‘Welcome to Kookoo Island’. It seems to take a more dreamlike and ethereal road compared to previous tracks like ‘Summer Sun’. What influenced this new direction?

SW: Pre-Covid we had an insane touring schedule. We played roughly 100 shows per year and had never really spent more than a week in a studio without breaks. So for us, the pandemic was like a mandated live-break, and we used that time to experiment in the studio.

AK: That’s where the whole idea of ‘Kookoo Island’ comes from. It felt like the whole world was going down in flames while we were having such a great time in the studio, 100% focused on music: no labels, no executives, no scene, nobody to tell us what to do. Our little Kookoo Island was a world without any rules and a lot of time to enjoy music and life. I think that’s how the sound and ideas of the album developed. Pure and from the heart.

SW: Our last record ANAANA was a sunset-record. It’s eerie and dark with glimmers of hope here and there, whereas ‘Welcome To Kookoo Island’ feels much lighter. It’s definitely a summer album that is inspired by the carefree childhood we were both lucky enough to have. Alex grew up in a National Park and we both spent a lot of time in forests and rivers.

AK: I think it’s this child-like naivety that inspired the sound and look of the record. Swimming up a river and dreaming up all those magic things that might be around the bend. I think it’s an album where the good times fight the bad times.

Your first full length album was released in 2018. How would you say your sound and your musical journey has developed to bring you to the release of your second album this year?

SW: Being on our Kookoo Island we have spent an infamous 10,000 hours on this record!  We’ve spent days experimenting with tape machines, snare sounds, and microphones, all to chase THAT sound.

AK: Yeah, I think we’ve never had so much time on our hands. We’ve also built our own studio and just spent A LOT of time there doing whatever felt right.

Which artists have been a key influence on your sound, in general but particularly on this album?

SW: We both love Ennio Morricone and film scores in general. We love sounds and certain vibes. Neither of us are songwriters in the traditional sense.

AK: I listened to a lot of riff-based music and loved bands like Kyuss or Megadeth. In my teens I really got into electronic music and DJing, so I started making beats in Ableton. People like Erol Alkan influenced me, but I never sat down with a guitar to write a song in an Ed Sheeran sense.

SW: Yeah! So that’s what we tried to incorporate into this album. ANAANA was definitely made more from a beatmaker perspective. But with Welcome To Kookoo Island, we really tried to write songs on an acoustic guitar and we fell in love with crafting them that way.

I know that you both grew up listening to film scores. Are there any other films or composers in general which have been a particularly big influence on your sound?

SW: Not a composer but a master of compilation: Quentin Tarantino. Our big goal as Cari Cari is to have our music on the OST for a Tarantino film (laughs).

How does it work translating influences from film scores into mainstream music? Also, do your lyrical influences come from a point of view of storytelling, or are they more personal?

AK: It’s all a wild mix. The lyrical content is often storytelling based on real-life events. ‘Jelly Jelly’ for example tells the story of us being chased by a deep-sea beast in a submarine, but it’s inspired by the bad experiences we’ve had with executives in the music industry.

You received great esteem after your performance at Primavera Sound in Barcelona. Do you have any particular places which are your favourite to play in, and dream countries or festivals you would love to play in the future?

SW: It’s always fun to play at extraordinary places. We’re playing three shows in Egypt in September – one of them in the library of Alexandria. Very excited for that one!

AK: For me it’s those legendary venues and festivals on my bucket list: Royal Albert Hall, Glastonbury, and Fuji Rock in Japan.

Cari Cari’s album Welcome to Kookoo Island is out on September 16th. Pre-order a copy straight from the band over on their website.