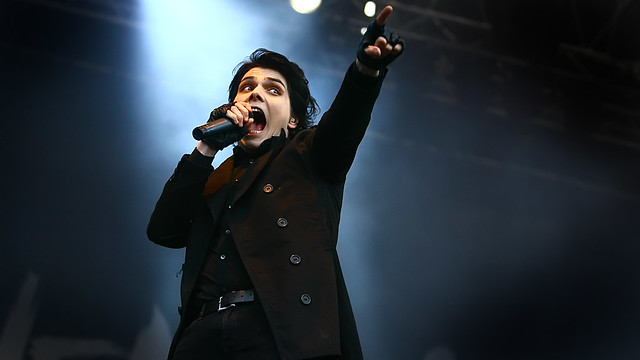 My Chemical Romance were my Romeo & Juliet, and they still are

Once upon an angsty time, scene kids roamed this miserable world. Was it just a phase?

It’s 2019 and music is going through some sort of a revolution; I mean, we’re listening to cassettes, bands are stopping touring, Taylor Swift can’t play her own music, Harry Styles is back and I read the other day that streaming is allegedly on the decline – I’ll believe that when I see it.

It’s a very noisy, confusing time and the industry is constantly throwing us curveballs. But amongst these curveballs, amongst the slanderous tweets, the PR stunts and the bullshit remain moments of familiarity. Things from the past that have never left us.

There’s none more so than that G note on the piano, a note you know better than you know your own name.

“When I was a young boy, my father took me into the city, to see a marching band…”

There are teenagers walking the earth claiming they were “born in the wrong era” because they’re growing up in a My Chemical Romance-less world. And who can blame them? Emo was never just a genre, it defined a generation of music fans who now, in their late twenties, experience the daily struggle of maintaining an all-black ensemble while still being able to breathe in a heatwave. We still wear Converse to the office though, we’ve just stopped doodling Paramore lyrics on them.

Our accessories were from Claire’s and we worshipped the scripture of Patrick Stump. HMV was at its peak because our sad anthems were still on CDs – CDs with liners full of lyrics that didn’t really make sense, but were somehow still so romantic. Band names were sentences, punctuation included, life was so hard and love was such a curse.

It was ‘stanning’ before Facebook was even a thought in a skint student’s head – he could be an alien though. It was swooning over boys and girls who both equally looked like Pete Wentz on MySpace. It was actually liking Pete Wentz in a non-ironic way. It was fucking MySpace.

You liked D&D, Audrey Hepburn, Fangoria, Harry Houdini and croquet. You couldn’t swim, couldn’t dance and you didn’t know karate, but when you listened to ‘A Fever You Can’t Sweat Out’ for the first time, you discovered yourself.

And now here we are. It’s 2019, you’ve cut your hair and you’re stuck at a desk listening to another melancholic unsigned band from Bolton. But you haven’t forgotten your roots, none of us have: you know the second any of them drop that iconic note on a piano, it’s because a whole era of sad musicians walked so they could run. Without them, we’d all be miserable at best.

Listen to My Chemical Romance on Spotify and Apple Music. Get the latest edition of our print magazine HERE.