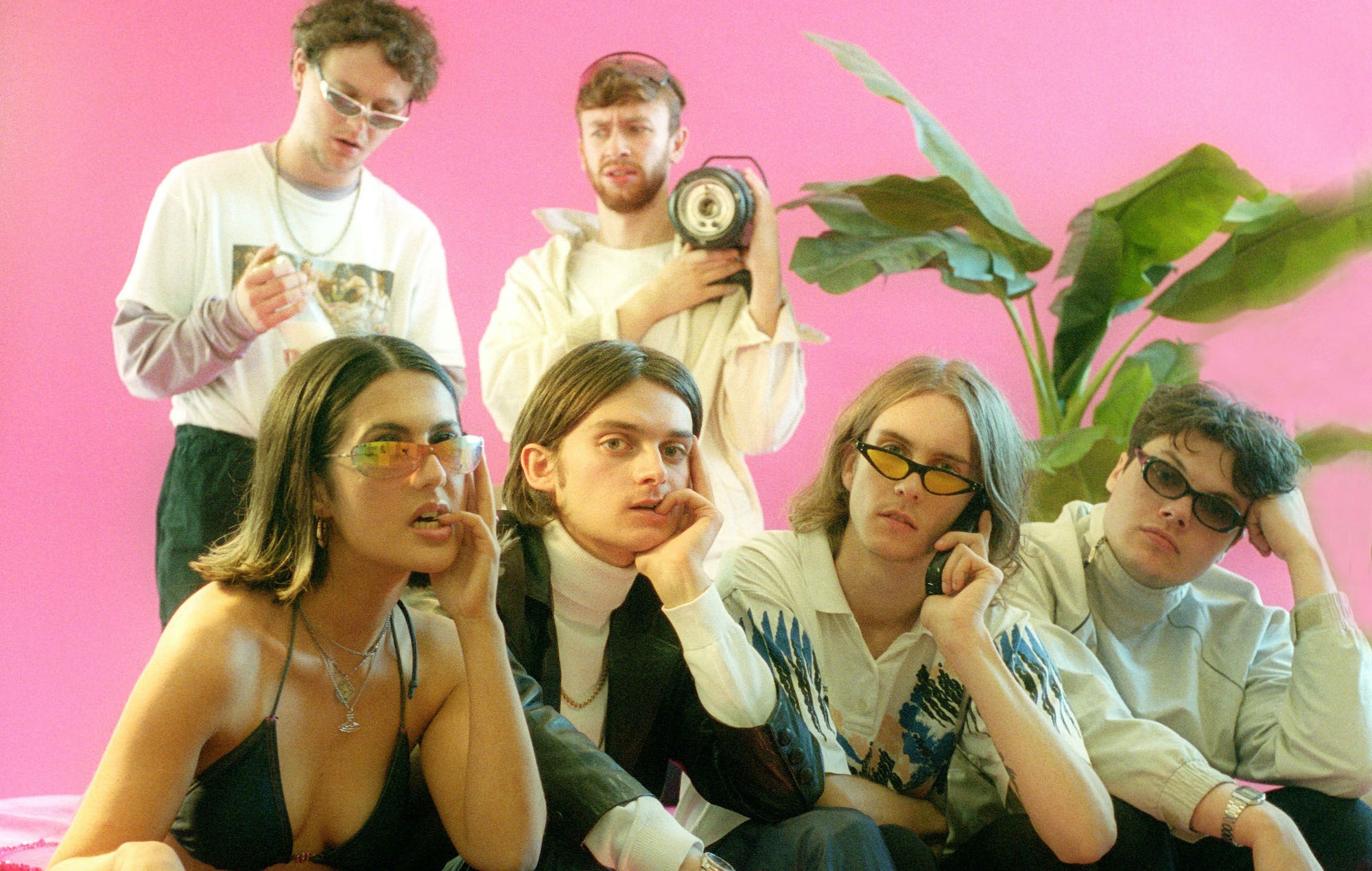 Electro-pop sextet Mealtime introduce us to their first course

Bands all over the world are being affected by the madness of lockdown. The future of live music is still up in the air and trying to promote and release anything from the confines of your own home is always going to be difficult. In the midst of this strange time, I sat down (virtually) with Georgia and Sam from the Manchester sextet Mealtime, just a few weeks after the release of their debut EP, Aperitif.

“Ooo it’s been a weird time, hasn’t it, Sam?” Georgia laughs. “It’s one of those things where you’re starting to meet up with friends again, [but] you’ve got nothing to report because everyone’s just in this same, weird kind of boat and no one knows what’s going on. As musicians, it’s hard for us; we haven’t been able to do any of the gigs we were gonna do and stuff like that, but we tried to find our own way kind of recording – even if we can’t be in the same room as each other.”

As unprecedented as life is at the minute, we’re turning it into a positive.

“You’ve been back at work as well haven’t you, George? I’ve just been sat on my arse for four months straight.” chuckles Sam. “To be honest with you, I’ve quite enjoyed it.”

For Mealtime, like many musicians, lockdown has become a creative outlet. Living away from each other and being unable to meet in person has made them appreciate things more, giving them a bit more time to focus on music and tackle other creative ventures – or at least think about them.

“Lockdown’s meant we’ve had a lot more time to write more music and it’s time we wouldn’t normally get. So, as unprecedented as life is at the minute, we’re turning it into a positive and just thinking, ‘You know what, we can write loads of music now’,” Georgia tells us. Sam took a similar approach: “Yeah, when’s the next time we’re gonna have all this free time to work. I thought I might learn Mandarin – I didn’t though.”

Despite the distance, they’ve still been able to communicate as a band, utilising all the tools available to them to continue to share and create with each other. “Life is just Zoom, basically,” explains Georgia. “It’s like it was created for this situation.

“There is not really that much we can do, it’s just kind of taking [time] to be on our own. Now you’re able to mix with another household, we’ve seen each other this past week; it’s just doing what you can really. We ended up almost finishing another record before this one even released! So that’s pretty good going.”

Finishing a record before releasing your debut EP would be impressive for any band, but something about finishing one in lockdown takes it to another level. When discussing this mysterious new record, not much was revealed – only that it would almost certainly not be called Starter…

Going forward, it would be really nice to sort of think about creating an actually cohesive body of work.

“We want to have fun with it because that’s the kind of people we are. But we are tiptoeing a fine line and don’t want to be pure gimmicks – we’re always going to be on that tightrope. As long as it’s fun and we find it funny, then that’s how it’ll happen – but we’re not sure yet.”

Delving into their creative process, they mentioned how that, as a sextet, it’s always difficult to come to big group decisions regarding their music. “We’re all yelling, we all just yell at each other. It comes from a place of love though because we all care about it,” Sam told me. “Even today, we were talking about our next body of work and we were fighting over a song that I love, [whereas] everyone else is like, ‘No, we shouldn’t use that one’. It’s just one of those ones where we all have to come to a decision.”

In the chaos of lockdown, Mealtime released their fantastic debut EP Aperitif: an assortment of songs, old and new, bundled together into a perfect summary of Mealtime as one of Manchester’s most exciting new bands.

“It’s strange because we’ve been sat on those songs for quite a while,” Sam explained. “When we were recording those ones, to be honest with you, we weren’t thinking about how they were all going to fit on a record. It was just, ‘What’s our best song?’ and, ‘Let’s put it on there’. So, going forward, it would be really nice to sort of think about creating an actually cohesive body of work, but still we’re really proud of this one.”

“It’s nice to think now that, if someone wanted to listen to us, we’ve got that little body of work that kind of, you know… is us,” Georgia chimes. “It’s our little baby, really. Like Sam was saying, obviously we’ve had these songs for a while, especially ‘Excess’ which we’ve just put out as a single recently – we’ve had that song for nearly 18 months. It was the first song we wrote that made us really want to do it as a band. It made us realise what we wanted our sound to be, so it’s really nice hearing that be on the radio and stuff like that, because that’s the first kind of thing we were really excited about.”

Upon release, Aperitif was the discussion of many indie outlets; the EP’s fusion of nu-pop and electronica was something new and exciting, especially since it was coming from such a new band. I asked them how it felt to have such a positive response this early on.

“Yeah its been all positive, I think,” Sam began. “I bet there’s people probably who don’t like it, but they’re not gonna be that vocal about it. There are probably people listening to it in their rooms going, ‘What were these guys thinking’.”

“I feel we are somewhat a ‘marmite band’,” Georgia agreed. “You probably either love us and really get it, or it might not be your cup of tea. We’re fine with that because this is our way of expressing ourselves – we’re alright being the freaks.”

Each of the six tracks on Aperitif are different and exciting – it is a showcase of what Mealtime have to offer, and just a teaser as to what’s to come.

“I don’t really have a favourite track off it, it changes week by week,” pondered Sam “It just depends on what I don’t listen to for a while; if I haven’t heard it in a few months I’ll go back to it and think, ‘Yeah, it’s pretty good’.”

“It’s funny because ‘Denim’ was the first song we ever put out and I just got sick of it because you’re your own critic,” Georgia explained “But then I went back and listened to it again for the first time in ages and realised that I loved it again. So, at the minute it’s probably that [song]. But it depends because I love them all equally. ‘Sublime’ was really fun to make because we made that kind of conceptual with the video we did, which was a really fun journey to go on. They’re all great in their own way.”

Currently, live music as we know it has been halted; there’s so much confusion as to when gigs will resume and we can make our way back to see our favourite acts. After a few of their shows got cancelled thanks to the virus, both Georgia and Sam were itching to get back out there and perform again, but they doubted whether it’d be the same as before.

“I was so excited to play the Brudenell Social club,” Sam told me. “It’s one of my favourite venues. I’ve never played there, just been to a lot of shows there and I’ve always wanted to play it, so I was really gutted about that.” Georgia felt the same: “There’s a couple of things that were gonna be later on in the year that we hadn’t announced yet, but we don’t think that they will go ahead. Who the hell knows? Whatever happens, the first gig back is gonna be so good, such a party.”

Whatever happens next, it’s almost certain that Mealtime will continue to create. Their new strain of electronic pop is certain to captivate audiences and interest on lookers. We’ve had the Aperitif, and now we’re hungry for the starter.

Listen to Mealtime’s debut EP on Spotify and Apple Music. Check out more exclusive interviews – including Arlo Parks and girl in red – in Vol 9 of our print magazine HERE.