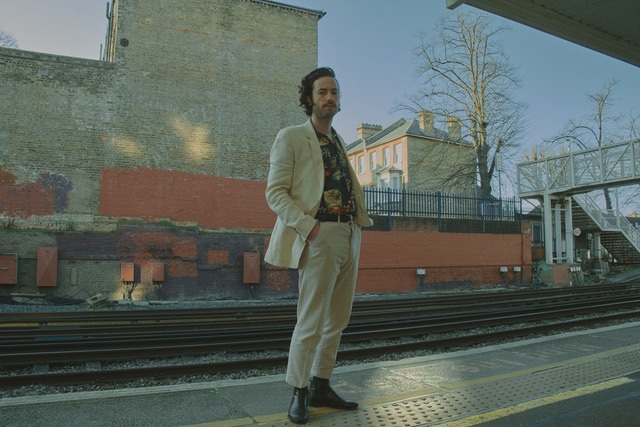 Jeremy Tuplin wants to send his heart into outer space

Over a zoom call, we caught up with the celestial singer-songwriter Jeremy Tuplin about his latest release ‘Violet Waves’.

You are classed as the pioneer of ‘space folk‘, where did the name come?

I kind of have this idea around genres that they’re very limiting and very meaningless. You’re taking yourself and your music, which is a mixture of different influences, and limiting it into something much smaller.

The space folk name was originally a joke to dig at genres, but I realised it actually described my music well. It was acoustic guitars blended with synths so had this contrast and juxtaposition of different instruments. Well, that and the fact that I wrote about space quite a lot.

Not only did the space folk tag begin as a joke, I read that the name of your band came from an inside joke. Where did the UPA gem come from?

We used to have this running joke where every gig was a different band name. Jeremy Tuplin and The Wild Salmon, Jeremy Tuplin and The Mountain of Fire and Miracles. The list goes on. But, a Christian Gospel Church opposite purpose bassists studio was called the Ultimate Power Assembly. And it was the most ridiculous name, I just had to use it.

If the space folk genre was an outfit, what would it consist of?

The garms that I put on to create this space folk character tend to be kind of cream-ish suits or just a matching jacket and trousers with fairly audacious sparkly shirts so I guess it’s the day to day space outfit for someone who’s just walking around on earth. Not too much, but just enough.

In your debut album Pink Mirror, released last year, you took on the ‘norm’ of love songs. Instead of having rose-tinted glasses, they were a bit more blue.

Yeah, I think one thing I became aware of after I released the record and it had been out was that it was kind of cold. And I think I just wanted to move away and create something with these new songs and with more expressions of love, either romantically or holistically, that were very true to myself and a message that I wanted to create.

Pink Mirror was a lovely thematic album, but is your latest album Violet Waves also created to follow a linear story?

I was thinking about this recently because you never think about the reasons why you create until you’ve done it, and also when you’re in this situation when you get asked about it, which can be kind of revealing when you talk about it.

One thing I wanted to move away from was quite thematic or conceptual songs. I just wanted to have the freedom to write about anything that came to mind. On the 12 track record, each song is its own thing. That’s why we had this idea to kind of present it as a TV channel as each song would be their own show. All songs are very different stories, just like in the last track [When I Die etc] where I die and send my heart into outer space. Without realising, I was putting in messages of appreciating and valuing your time rather than taking it for granted. Originally there were 15/16 tracks so it was a case of stripping them back and working out the best flow for the album.

‘Apocalypse Television’ was one of the last songs we removed, but it was only a working title because it had the TV theme quite explicitly but yeah I think once this pandemic issue arose, it just felt a bit too real.

Will fans ever hear these Easter egg tracks?

I think we’ll probably try something with the ones that didn’t make the record, hopefully create an EP.

What has it been like creating music videos from the comfort of your own flat?

We’ve made three now! The third one is a bit more defined because we’ve used a proper camera for once!

It was quite liberating, this short three or four minute concept to just have fun and realise there’s not that much you can do storytelling wise but just to kind of befree with it and explore what ideas come to you. It became part of the sense of identity for the character I was putting forward for this.

Especially as your tracks feel larger than life, what was it like capturing them from inside of a flat?

There is that contrast especially when filming for ‘Space Magic and the thinking behind that song of thinking of the magical and appreciating the wonderful aspects of existence and then filming it in our flat and looking around and doing very mundane things. It just creates that juxtaposition in a way that is part of the song, it’s about appreciating the small stuff.

Do you have any last words for our readers?

I hope you enjoy the record and hope you take it onboard and to delve into the kind of weirdness at times.