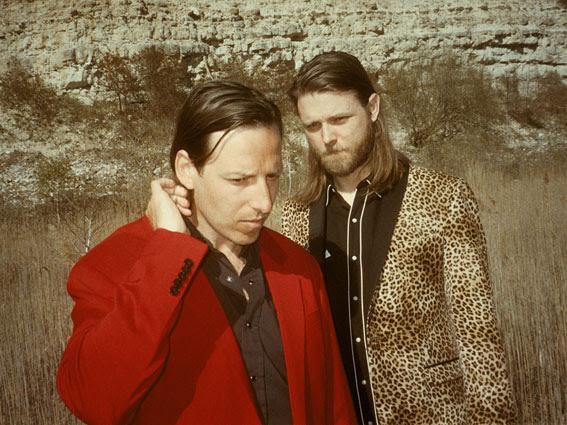 As Palace Winter released an album of the ages, channeling ’70s soul, ’80s synths, ’90s guitars and ’00s hip-hop, we caught up with lead singer and guitarist Carl Coleman about the writing process, Little Richard and the new experimental pathway for the duo.

How have you been holding up over the last few months?
Better than most I imagine. We’ve had it quite good over here in Denmark for the most part, so I can’t complain. But we miss touring of course!

Your new album is titled …Keep Dreaming, Buddy. Is there a story behind that name?
It was a temporary/working title for a song we had but we liked that it was like an ambiguous everyday ‘idiom’ inspired by ’70s songwriters, such as Randy Newman’s ‘Trouble in Paradise’ or Tom Waits’ ‘The heart of Saturday night’. We love that it has a laid back 70s spirit but also the duality of it. One reader might view it as encouraging advice. Another might read it as holding a sarcastic condescending tone. Personally, I can relate to both. A passer by might cry it out on a busy city street…. or your partner might whisper it patronisingly under their breath etc.

The album was partly created in Tenerife. How did the island influence the album? Do you think the culture had an impact?
Definitely. I think the contrast between a place like the Canary Islands and Denmark really represented the healthy friction between Caspar and I. I was walking around the weird volcano island of Tenerife. The retro hotel we were based in – my family and I were there for 2 months – was like some kind of forgotten paradise resort. Retired drag queens flanked the pool. Everyone was German. The whole thing felt like some kind of Lynchian alternate reality. Caspar was sending me all these synth hooks and drum loops from Denmark. So I just started to come up with vocal melodies and lyrical ideas and record them into my phone. It was a really nice way to work and get inspired to be separated like that and be coming from two entirely different environments and climates.

The album takes a slightly more experimental path, dipping into a range of different sounds. What made you want to branch out now?
It’s just kind of the natural thing you do as an artist isn’t it. Always looking for new avenues to go down and ways to shed your skin and push yourself into new territories. Caspar is somewhat of an alchemist when it comes to exploring and searching for new sounds. I call him the “synth Jesus”. And we looked into different genres for inspiration too. Whether it be hip-hop or classical or even movies. I look to films and characters in my life when it comes to the stories and lyrics in our music.

Is there any song on the album that holds a special meaning to you?
Well I know Caspar feels that ‘1996’ is perhaps the best thing we’ve ever done as a band. But for me, actually the opening song ‘Monument Eyes’ for some reason has a lot of weight to it. It was the last thing we recorded and I think it just really sums up the emotions I was feeling at that time and as we approached the end of making the album. It holds a deeper meaning to me personally too, but that’s for me to know hehe… What I can share is that it was directly inspired by that wild Nicolas Cage film Mandy. The scene where the “bad guy” spots his muse walking along the road and it’s all filtered in red and is super dreamy. For some reason that scene really spoke to me. Which is messed up actually now that I reflect on it… don’t worry I’m not a psycho killer haha.

Your fourth single, ‘Richard (Says Yes!)’ is an ode to the late Little Richard. What made you want to dedicate a song to him?
A while back on tour, we were randomly watching this Jimi Hendrix doco and Little Richard came on and we were both just kinda floored by how alive and funny and inspiring he is. So he kinda became like this little team mascot for us. Like, just do it ALL!! “Put some sugar on it! MORE!” And also helped remind us to not take everything so seriously all the time. Lyrically I was going for something kinda sassy and simple, inspired by T REX’s ‘Get it On’. We wanted to pay tribute to LR’s flamboyance and colour, and I feel like we achieved that on that song.

What was it like collaborating with other people on the album, like Ned Ferm and Jason Lytle?
Yeah it was a real thrill to get Jason on board and a proud moment for our band. And his feature turned out even better than we’d hoped. It’s perhaps my favourite song on the album (The Deeper End). Think Kraftwerk playing a classic country song. We discovered that Jason was a fan, so we hit him up and he was dead keen to sing on it. It’s as simple as that. Ned is a bit of a legend around Copenhagen and a great dude as well as a fantastic musician. And Soffie and Marie add their amazing vocals to couple of tunes too so we were super grateful. It’s all part of that same strive for new colours and textures.

You’ll hopefully be touring again in March, what can we expect from the live shows? Is there any song you’re particularly excited about playing live?
All of the new songs to be honest. We’re just bursting to play. Unfortunately at the time of writing this, a UK/EU tour in March is looking highly unlikely but hopefully we can get on the road again some time in 2021 and we’ll bring stacks of energy and give you all the feels.

What can we expect from Palace Winter in the future?
Hit after hit….. Honestly, who knows? But I imagine more hard work and hopefully more and more great songs!

Listen to Palace Winter on Spotify and Apple Music.