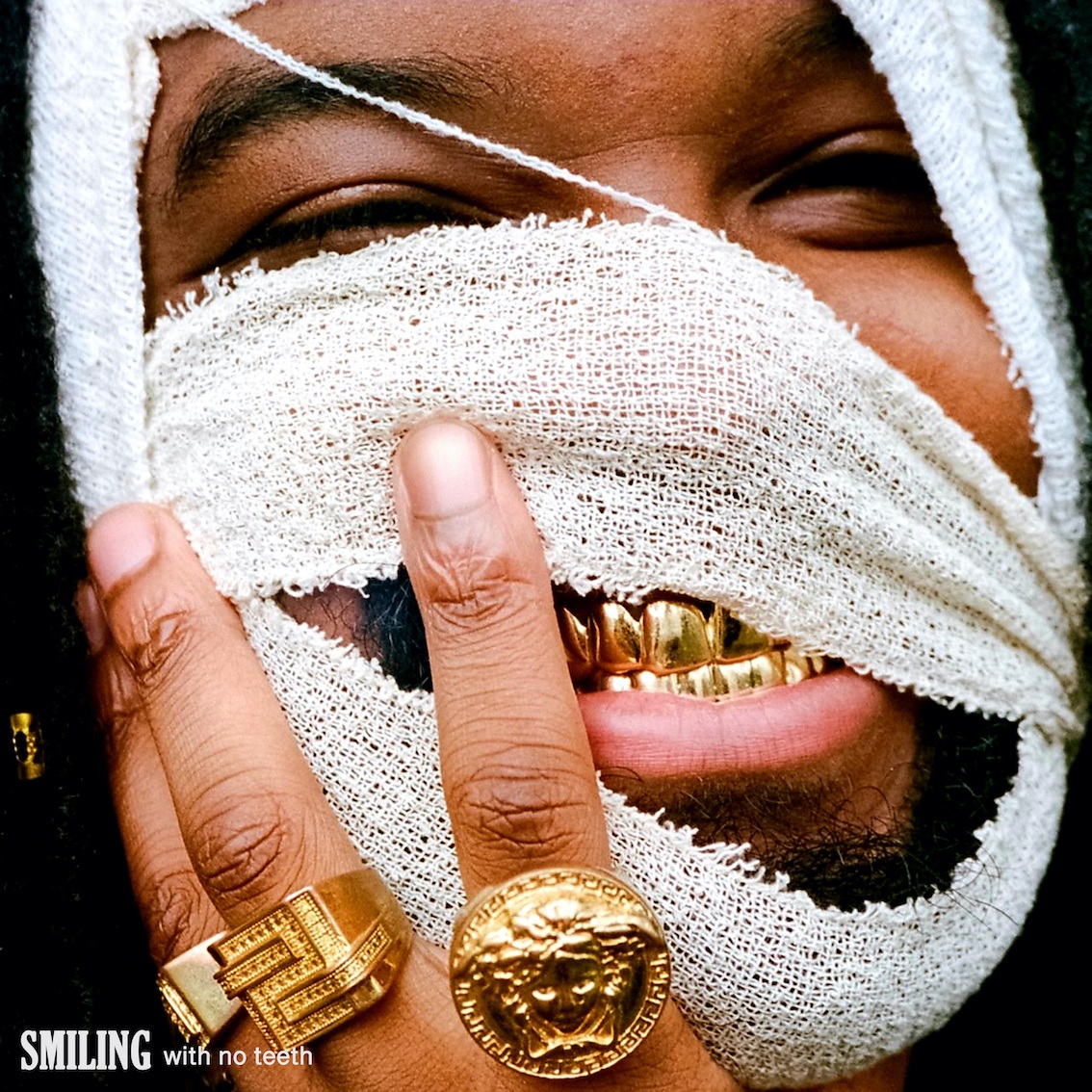 Genesis Owusu refuses to be contained on ‘Smiling With No Teeth’

Disguised behind trademark facial bandages and golden grills, what you see isn’t always what you get with Genesis Owusu. However, on Smiling With No Teeth, he briefly removes this mask to unveil limitless ideas.

The first full LP from the Ghanaian-Australian musician, Genesis showcases an eccentric mix of sounds, with elements of punk, jazz and hip-hop generating a stark divide between his harsher tones, and his more romantic tracks.

He’s at his most emotive in the lethargic groove ‘Smiling With No Teeth’, delivering lines in a voice just dripping with honey, like they’re a distracted train of thought. Yet, his words reveal underlying struggles; he debates life and love, as the soulful backing vocals tell us that ‘everyone wants the sweetness without tasting the pain.’ Even the name of this track (and of the whole album) hints at Genesis smiling falsely through his own suffering.

Genesis’ voice stretches its own limits across the album, veering from growling refrains to soft-spoken verses.On ‘Black Dogs!’ he hisses lyrics in a vicious cacophony, over punk basslines. Black dogs with golden leashes (or golden chains) haunt the album, an animal typically symbolic of bad luck or danger — Genesis uses their image to illustrate his anger towards racial violence and stereotypes.

Elsewhere, the black dog’s appearance signifies mental health struggles. ‘The Other Black Dog’ is a supercharged sprint of a song, crashing ahead at one speed until the last minute mark where it lapses into a cooled-down groove. Perhaps this track is aurally brash to assuage its sensitive emotions. Genesis’ jubilant rap is unapologetically direct, speaking of the chasm between his swaggering bravado and how empty he feels inside.

At 15 tracks, it’s a marathon of a debut. By including so many tracks in the album, Genesis has slightly overreached. Tracks feel half-baked and songs like ‘Drown’, a collaboration with Australian singer-songwriter Kirin J Callinan, deserve more time.

It’s an album that gets distracted in its own exploration, like two projects smashed into one – half frenetic, darkly thrumming, the other airy and calm. There’s no chance of getting bored with this album; it’s just a little hard to find the highlights in such a long and varying project. If Genesis had combined these elements, rather than keeping them separate, this album may have reached its full potential. With hope, Genesis’ next experiment will trade quantity for quality.

Haiku review:
Black dogs and gold chains
Genesis splits in half here
Which side will you choose?

Listen to Genesis Owusu on Spotify and Apple Music.