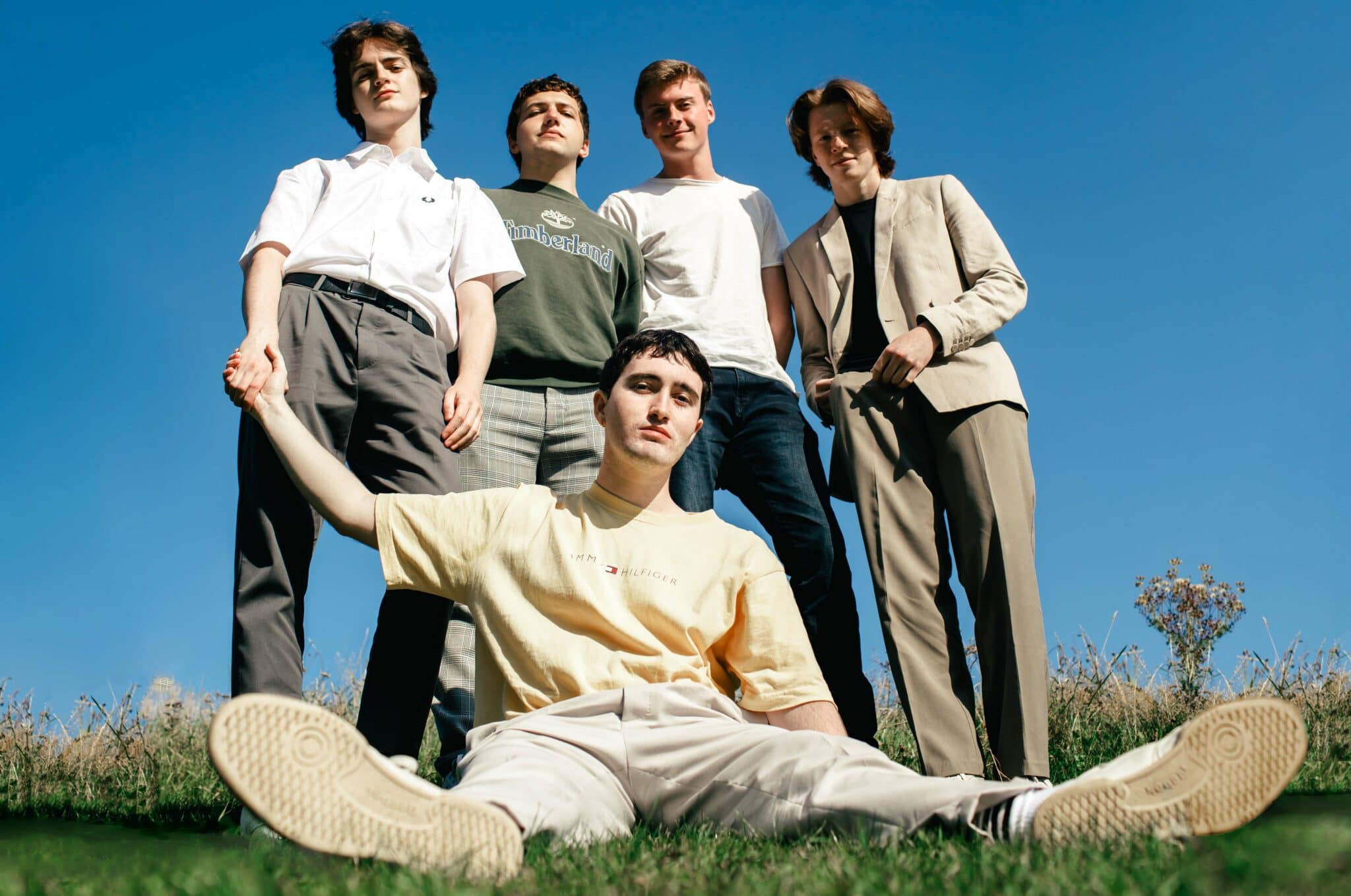 With a smattering of singles under their belt already, Liverpudlian quintet Courting seem to be sitting on the brink of success. Their debut EP Grand National is set to be released in early April and could easily be the thing to knock them over that edge. I spoke to the band’s frontman, Sean Murphy-O’Neill, to discuss everything relating to the release, gigs, and pancakes.

With the release of the EP creeping closer, it might have felt daunting for the band to release their first record into the world. “I’m feeling great!” He’s quick to reassure me. “The reception we’ve got so far from the first two singles has been really good, and I think that the other two tracks are even better, so I’m really looking forward to seeing what people think about them.”

The pre-existing fanbase for Courting is tight-knit and dedicated. They’re often mentioned in other bands’ Facebook fan groups, and crop up on Twitter for listening parties of new singles. I ask if their fanbase is helping to erase any fears they do have about the release of  Grand National.

“I feel like we’ve got quite a cut-throat fan base,” Sean says. “If we did release something bad, they’d be comfortable telling us it wasn’t as good as what we’d previously been doing. I feel like there’s always been pressure, but it’s a hope that they do like what we release.” It’s refreshing to see such honesty within a fanbase – hopefully, this will remain to work in the band’s favour.

If you’re a bit more subtle with it, people might actually accept your opinions.

Regarding the name of the EP, Sean recalls seeing an advert for a virtual Grand National and thinking how great of a name it is for a song – not only because of how the words sit together, but also because of their individual meanings. He adds that it “summed up everything” they’d already released: encapsulating nationalism, the Grand National is also based in Liverpool, so there’s an even deeper connection to the band from there.

Courting’s political views present themselves differently to other bands. Especially in the post-punk circle, lyrics with a social narrative seem to be shouted at and thrust upon listeners, but Courting stay away from that performativity.

“We try to stay away from being overly political and edgy about our beliefs,” Murphy-O’Neill notes. “A key way of making your opinions heard in a way that might actually change people’s minds is to avoid shouting ‘fuck the Tories’ on your record. If you’re a bit more subtle with it, people might actually accept your opinions. But by just screaming it at them, all you really do is isolate those who don’t agree with you really quickly.”

The conversation moves to the lyrics of ‘Pop Shop’, the lead single for the EP, and what Murphy O’Neill considered to be ‘selling out’ in the music industry. “If you’re in a band that is doing something more experimental, people criticise you as though it’s an attempt to sell out. When in reality, a lot of bands have realised that if they don’t stick to what they’re already doing, they’re more likely going to isolate the people that they’ve built up.”

He picks up on bands taking on more of a dance/pop influence by their third record, “It’s quite respectable because no matter what genre or sound you wanna try out, it’s never fully merited,” he observes. When applied to the band’s writing process, Murphy-O’Neill reveals that he avoids writing in a “naive way” of saying ‘this sounds like Courting’ or ‘this doesn’t’. If he likes it, it’ll become a Courting song – he just doesn’t want to put limitations on it.  “When you do limit yourself, you stop yourself from being able to grow as an artist and performer,” he adds. This narrative is really reflected through Courting’s discography. When you compare the earliest work (‘Not Yr Man’) to their newest (‘Grand National’), there is undeniably a huge shift between the two.

It’s safe to say that the band is constantly adapting and experimenting with new styles, but as to where Courting will turn next, there doesn’t seem to be a definite answer: “We try to take in a lot of music and combine things into newer ideas for us” Murphy-O’Neill begins. He explains to me that at the end of last year, he and the band’s drummer Sean Thomas had set out to listen to two or three albums every day to discover new music. During the exploration period, his creativity tripled – there was no longer a ‘limited colour palette’ to choose from.

“It just comes down to not seeing one form of art higher than another, and just enjoying whatever is fun,” he reflects, which I think is an excellent way to put it. From what he’d said, I joked that a Courting computer music album could be in the works. He laughed and revealed that he didn’t know how much he could say, which pretty much confirmed my theory.

With summer quickly approaching, promises of relaxed Covid restrictions seem to be imminent. Our beloved gigs are set to be returning for the first time in over a year, a big deal for up-and-coming bands like Courting. The quintet recently did a streamed gig for DIY Mag, and I wondered how it felt to be performing without a crowd. “It was actually a lot of fun!” he says, adding that the crew from Spec 51 and DIY “felt like the world’s smallest crowd”.

“At the end of the day,” he admitted, “it’s better than no crowd at all, and it was nice to get a round of applause after playing a song for the first time in a year.” He further added that a lot of performers live for that slight ego boost at the end of the show because it reminds you that what you do is actually what you enjoy. I imagine it to be a humbling feeling.

If there’s one thing that we can be remembered for in lockdown, I hope it’s our music releases and not what I make for breakfast!

The excitement for playing shows again seems to be high with Courting. “At this point, we’re looking forward to playing everything we can. As soon as it’s legal, we’re going to play every night and knacker ourselves out because we haven’t really had the chance to do so yet,” Murphy-O’Neill claims.

“‘Slow Burner’ (the closing track on Grand National) is a lot of fun to play – we’ve been playing it for two years now, but it’s mutated into something completely different on the EP, and I can’t wait to see how other people react to it.” So, if any hardcore fans remember how the track once sounded, you’re in for a treat with how it sounds now.

On the subject of treats, our chat draws to a close on one of the most intriguing things that Courting have done over lockdown: pancake-making live streams. Murphy-O’Neill had learnt to make American pancakes over lockdown and began streaming whilst he made them, featuring some nice music playing in the background. People seemed to enjoy them, so it soon became a running series on their social media. Is it going to become a Courting trademark? “I hope not!” he confides, “if there’s one thing that we can be remembered for in lockdown, I hope it’s our music releases and not what I make for breakfast!”

If you ask me, it’s almost certain that Grand National’s release will make more of a stir than a few pancake live streams will.

Courting’s EP is out on 9th April – listen on Spotify and Apple Music.