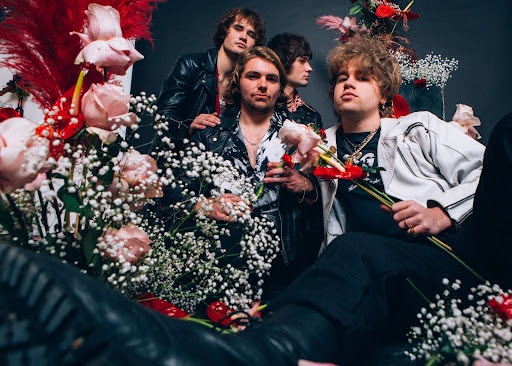 We’ve been off for a few weeks as our next print volume has taken precedence, so this week’s list is sort of a catch-all. Some songs that were just released, some that have been out for a few, but all of them worth your attention. Let’s round ’em up…

TRACK OF THE WEEK: The Velvet Hands – I Wanna Be There

We wanna be wherever The Velvet Hands are because this new song is IT. The band has delivered yet another solid garage-rock banger, giving us all the emo lyrics and punky guitar riffs we needed. We’re just going to have it playing on repeat while we copy the 2000s-esque scrapbook track art, if you don’t mind.

SPLINT – Military Procedures
For all the comparisons this band will draw, the one most might miss is Parquet Courts. Listen closely and the likeness is there – in the guitars’ wiry, jumpy attack and the intuitive musicianship behind the singer’s walk through vexing and puzzling pieces of our current experience. It’s smart, if slightly unaffecting.

Charlie Clark – I Don’t Mind If You’re Right
This song wants so badly to be classic ’90s rock – just check out the video for some intentionally blurry and choppy film camera shots and a whole lot of silhouettes. While it’s a decent 2020s substitute, it can’t quite meet the expectations it conjures up. However, we honor those who honor the classics so points for that, Charlie.

Rocky Votolato – Becoming Human
20 years in and Rocky Votolato is still out here crafting achingly beautiful and simple folk songs that are easy as hell to get lost in. ‘Becoming Human’ is just another iteration in an often underappreciated discography.

Grandma’s House – Body
I don’t know about you, but this was not the type of music coming out of my grandma’s house. We’ve got gritty, grimy, punk here, complete with singing about darkness and bodies in the water. Not what we were looking for this week, but perhaps it’s what you’re seeking – just do us a favor and pet a puppy or something afterwards, alright?

Vacant Weekend – Cool New Friends
This is an actually funky, facsimile of 1975-type socio-romantic reporting. They’re wise making it sound bright ‘n’ tight because it’s a song from a narrator with enough leisure-time or leave from reality to dedicate an entire tune to a friend who isn’t even fond of them; there are tickity hi-hats, some six-stringed sparkle and a line about angst for baby existentialists.

Princess Chelsea – Forever is a Charm
This song — an indictment of romantic tregetours and their hollow promises — is performed like an incantation, with Chelsea steadily unravelling her heartache, a breathy vocal delivery like Kylie Minogue playing Chinese whispers. It’s all a bit Disney, if Disney allowed their princesses any subtlety, talking about love.

Sacred Monsters – Temporary
Catchy and quirky in the vein of Beach Bunny or Wheatus, this song is sure to be stuck in your head immediately. It’s infectious, but without any nasty side effects. Thankfully there’s a repeat button.

Wild Horse – Bitter
Living in a land of forced male repression — as we are — it’s nice to hear a song about a man who dares to ask for more from his partner than just their bare skin. At first, my ears receded at the sound of another band branching off The 1975 but this cut actually sways which is something The 1975 rarely do. I wish I could think about Matty & the boys less but their influence is so apparent it’s inevitable at this point.

Ken Yates – The Future is Dead
Ken Yates delivers a charmingly animated video for this melancholic slice of indie-folk. ‘The Future is Dead’ is basically musical comfort food – warm, inviting and familiar. A pure delight.

Chris Shiflett – Born and Raised
There were many takeaways from the recent Taylor Hawkins tribute show at Wembley – first and foremost, the next generation of Foos are fucking TALENTED! – and one of them was a reminder of what an incredible guitarist Chris Shiflett is. Apparently, he’s just as good a songwriter. ‘Born and Raised’ is Americana perfection for the golden coast.