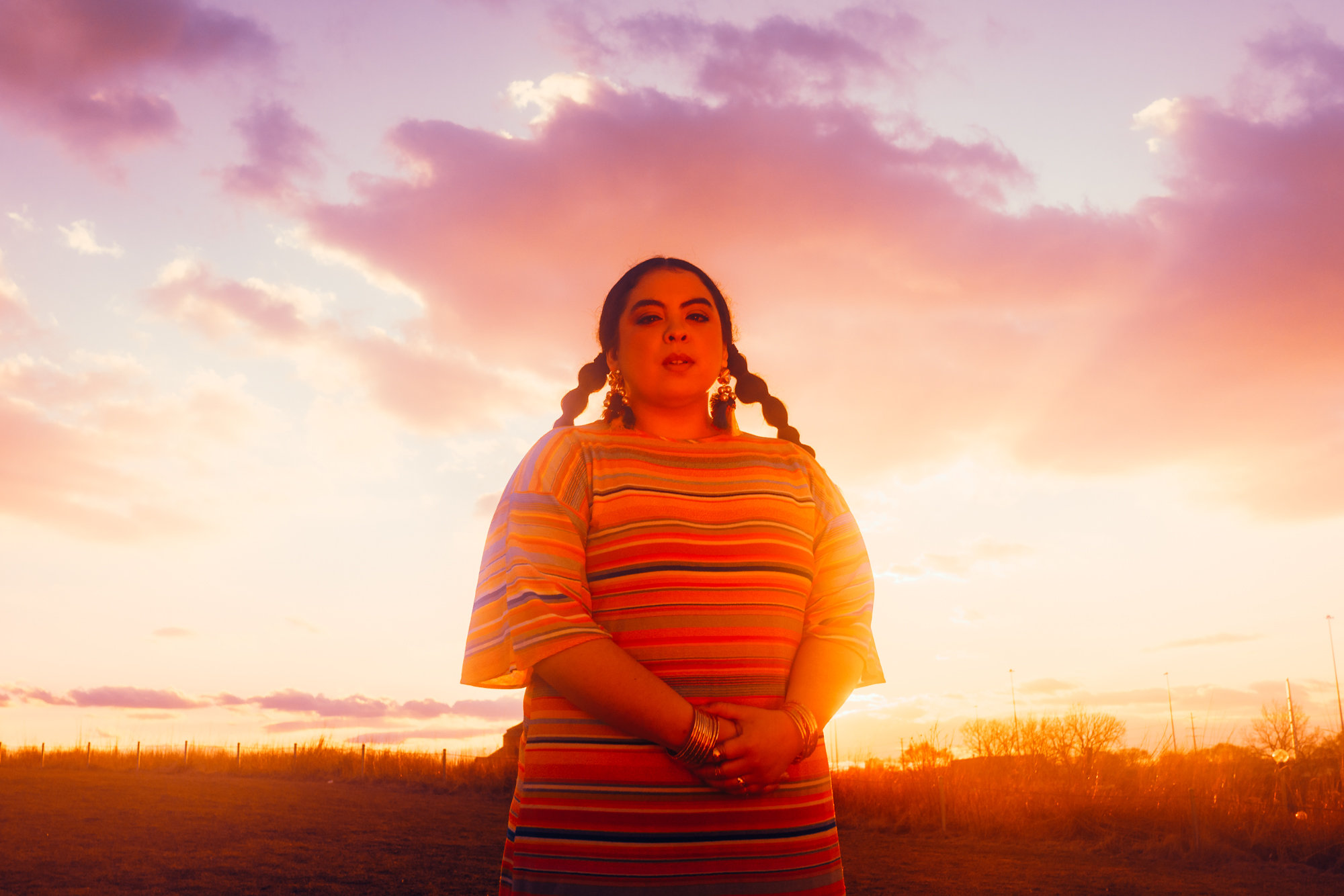 Kaina talks multi-lingual music and getting through the bad times

Kaina has a voice that few others have. She tells stories few others can. She’s a unique talent, on the verge of something special.

‘Next to The Sun’, is due to be released next month, so congratulations firstly! What can we expect from the record, does it tackle any particular themes? Can we expect more from you soon?
Thank you! It is sort of hard for me to explain the record because I’ve realized I’ve infused every single song with so many parts of identity and feelings that are coming together to coexist as one, so it sort of feels like the record is a person at times or myself. I feel like each song on it represents my brain within the span of a day or an hour. There are days where I am so all over the place and am thinking about my identity, the state of the world… and on top of those are general human feelings like love and sadness – I feel that this translates across in the record in each song and collectively if that makes sense. In general, I feel that the record is vulnerable in a way that I have never been, being honest about feelings that I don’t like to share as much because they’re hard to feel but just as necessary and important as the better feeling ones.

This is all I have on the horizon so far, I am excited to tour and play shows but definitely feeling the writing bug coming up again.

Though you were born in Chicago, I understand your parents are from Guatemala and Venezuela. This definitely comes through in your songwriting, was it important to incorporate your Latina heritage into the music? Did it feel natural, for example, to write lyrics in both Spanish and English?
I think when I write I am not thinking about ways to incorporate my Latina heritage into my music, it sort of just happens because everything I make will be influenced by who I am no matter what. I think in relation to production though it was really funny for me at times because a lot of these songs started out as a bunch of crappy beats I made and when I would get done making them I’d listen back and be like woah, this bass line is super Latin. It was funny to me because I was subconsciously writing things that sounded like music that I grew up listening to because of my parents or blending genres together without even knowing. In relation to writing, I feel that I am able to mostly properly describe my feelings better in English but Could Be A Curse felt like a moment where I felt like I had the write words to what I was trying to say in Spanish.

‘Could Be A Curse’ with Sen Morimoto, features lyrics not only in Spanish but also in Japanese! You say this idea came to you in a dream, do you often find inspiration there, if not, what else makes you inspired? Did it turn out as you imagined?
I feel like I dream quite often but I don’t actually remember most of them, there have been moments when I am working on a song or something and I go to sleep and suddenly the words or melody come to me in my dreams and I have to get up and record it even as a voice memo so I remember it. This dream about Sen and I writing a song in Spanish and Japanese I remember vividly though because I thought it was interesting that we would be able to write in languages that neither of us understood but could feel. We were working on this song because I told Sen I wanted to write a song that sounded like boleros which are songs that are sort of like standards but in Spanish, classics, like Besame Mucho. I then reminded him of my dream and jokingly suggested we should do that with this song, but then we decided to try it and it was perfect and so beautiful.

This track in particular looks at opening up about the shitty days, poignantly illustrated by its recent music video. This video is painfully relatable, but does end on a happy note – what do you hope your listeners will take away from it? Is this a fall and rise a deliberate theme?
I think the fall and rise is definitely a deliberate theme, on the title track Next to The Sun I have a lyric that says “Wanna feel it all, the burn and the lesson, the fall” Again this circles back to what I was describing about not wanting to feel ickier feelings but that those are as necessary as the good ones in order to evolve. I think what I want my listeners to take from this album and song is that it is completely okay to feel all the feelings and it is really important to validate them all. I have days like Could Be A Curse where I just want to lay in bed and forget the world and honestly, sometimes ignoring that feeling hurts more than just accepting it as the feeling of the day and allowing myself to live through it.

We love how soulful and smooth your sound is, did you grow up listening to much of this style? Was there a particular artist who really inspired you, or who continue to today?
Thank you! I grew up listening to a ton of Motown via my father – people like Stevie Wonder, Michael Jackson, Aretha Franklin, Diana Ross + more. I also grew up listening to a lot of salsa like Celia Cruz who’s voice is so complex, beautiful and full of energy. All these people definitely influence and inspire me today.

You’ve collaborated with a few different artists on the Chicago scene, including Bedows and Burn Twins, what’s it like working with others, compared to rising solo?
One of my first musical experiences was in bands in high school and that was really different because a lot of people have a bunch of different ideas on what things should sound like, but there is something nice about working towards one common goal and having more of a team mindset. Working with producers like Bedows, Burns Twins and Sen Morimoto was pretty different because they helped me produce songs that were my own. It is awesome working with talented people because I get to tell them what I imagine in my head and they get to help me execute it.

Is there anyone you’d love to collaborate with in the future? Don’t be shy here, who would be in your dream music team?
Collaborations typically happen for me through friendship and they are super natural, I don’t like to push them. I think I’d like just like to collaborate with my peers because that is who excites me the most, continue to work with my best friend Sen Morimoto, my good friends Iris Temple, Nnamdi Ogbonnaya and loads of other Chicago people. There are a few artists from New York I really love like Nick Hakim and Duendita – their songwriting is so good and I’d love to work on something with them someday.

What direction would you like to take your music in the next year? What do you aim to achieve?
I am unsure! The contents of Next To The Sun sort of surprised me when they came to me because it felt really different from all my other things. I think I’d just like to continue to try to be honest, vulnerable with myself and my writing and hopefully that will continue to be relatable to the world as I evolve. My goal is always vulnerability, to be something for someone so they can get further in touch with themselves.