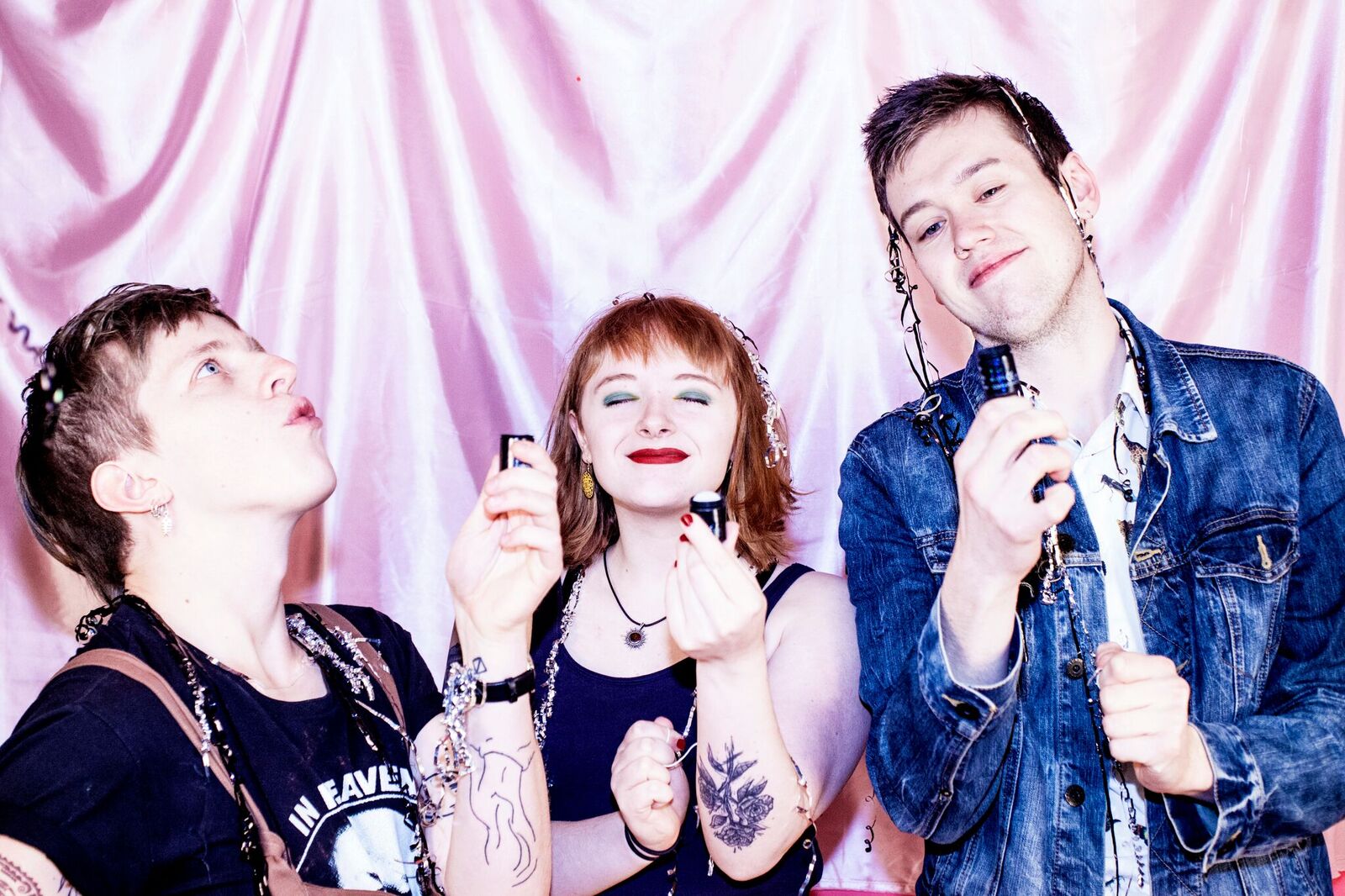 Gaffa Tape Sandy are coming fresh from riding high on the Glasto train, so I imagine they were pretty stoked for this soft come down on The Rodeo. We asked ’em a few questions to see if we can get to the bottom of a few things that have been niggling us.

Now Glasto is a big deal, how did it feel to play the festival AGAIN? Was it any different to last time you appeared? And who did you see because we are jealous…
Both times have been pretty special and we played on two wicked stages. The two times were hugely different, mainly due to the areas. The first time we played we were at Silver Hayes, which is an awesome area but feels a little more normal festival-y. This time we were playing in the Unfairground area. Where everything is mental and there are big plastic babies with insect legs. It’s all a bit surreal so the experience itself fits right into the surroundings. We loved both times and we saw so many wicked acts, ie The Cure, Wu-Tang Clan, Fontaines DC, Stella Donnelly, Slaves and Slowthai.

We sort of just get in a room with each other and throw stuff around until what we end up with feels right.

You’ve described ‘So Dry’ as being quite expressive, do you find it easy to use songwriting as a catharsis? Or are performances more your chance to vent?
They’re definitely both opportunities to be emotionally expressive, just both very different ones. I think songwriting is more like a slow talk over a cup of coffee, trying to figure out life’s various problems, whereas playing live is like a really loud and angry shouting match where you just get it all out in one go. So Dry is more like our way of being brutally honest without actually having to get in anyone’s face.

What inspired you, or continues to inspire you to create? Is there usually an event or moment where you think ‘right it’s time to get back into the studio’? And is there such a thing as the ‘right time’ to record?
The artists, musicians, friends and family that we surround ourselves with are more than enough inspiration than we need. There’s definitely a right and wrong time to record. This time we rushed ourselves a little bit recorded songs that haven’t seen as much live-play as our other recordings, but that excited us, and I think we used that freedom to really experiment with the production and arrangements of the songs.

You’ve said that you usually keep the anger of ‘So Dry’ out of your songwriting, does personal experience control what you write or are you more reflective in the way that you go about creating?
In terms of lyricism, mostly they’re written reflectively. But I think personal experience inevitably has an effect on lyric writing, mainly in terms of how easy it is to write them and how quick they flow onto a page (or, iPhone note). I think sometimes it’s easier to write lyrics with a clouded brain. Usually, the hooks for Gaffa Tape Sandy are written when in the bath or walking. Sitting down and concentrating on writing lyrics is great for verses and more complex stuff, but the hooks always come when my mind is elsewhere. God knows why!

There’s a huge lack of just about anything around Suffolk. And that provides a lot of free time to experiment with music and art, and see what works.

You’ve been described by various sections of the music press as ‘indie’, ‘punk’ and ‘garage-rock’, over here we don’t always like putting artists in boxes and thinks it’s best to ask you to define your work, so how would you describe what you do?
We really do not spend much time talking about this. We don’t set an aim, we don’t have a trajectory with our creative output. Sometimes we steer the ship a little if someone brings an idea to the table that doesn’t feel very “us”, we steer away from that idea until it feels like us. Until it feels fun. But other than that we sort of just get in a room with each other and throw stuff around until what we end up with feels right.

You come from a rural/local background in Bury St Edmunds, so what drew you to the kind of music you create? What kind of melting pot of music does a market town give you growing up? Also, the word “garage” tends to crop up in a lot in things that people write about your work, I can’t imagine there are many garages in Bury…
I think boredom is a huge motivator sometimes. There’s a huge lack of just about anything around Suffolk. And that provides a lot of free time to experiment with music and art, and see what works. There’s not many garages around Bury, that’s true, but surprisingly enough, there’s a really warm and compassionate music scene full of some really fantastic and encouraging people who will give any type of music a platform. Because of this all-welcoming attitude, there was nothing stopping us from making garage. We could have made trip-hop, or black metal, and probably still would have been welcomed into the small music scene of Bury St. Edmunds (rock city).

Looking ahead to the rest of the year and beyond, what are your plans for world domination and what exciting things have you got in the pipeline?
Well, we’ve still got a few festivals on the way up and down the UK. This month we’re playing Cornwall for the first time at Leopallooza Festival, and then we’re lucky to be returning to Truck Festival for the second year in a row! It’s easily got one of the best alternative rock line-ups we’ve ever seen, and we had an amazing time there last year. Then, later on, we’ve got Wild Paths Festival in Norwich, SWN Festival in Cardiff and Indian Summer 004 in Glasgow!  Oh, and our new 8-track EP ‘Family Mammal’ is out on 9th August thanks to Alcopop Records, who are pressing it to vinyl for us, which is very exciting.  We’ll try and do some headline dates after that, and maybe if we’re lucky someone awesome will take us on tour with them. Our fingers will remain firmly crossed until then.