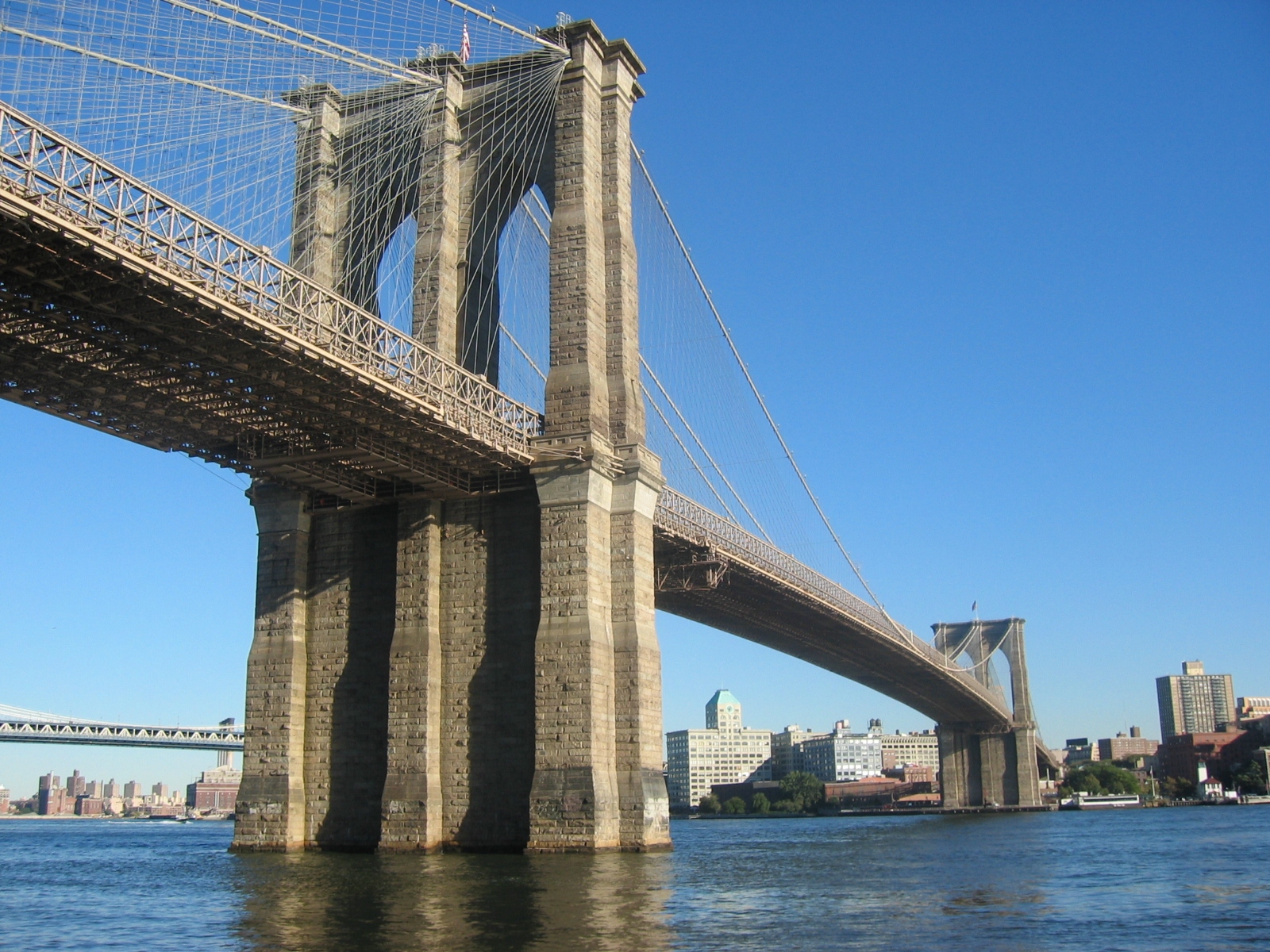 All Around The States: Brooklyn, New York

It’s been a while. It’s officially a new year. A new decade. I’m happy to report that, in keeping with tradition, it’s taken less than a month for my commitment to my New Years’ Resolutions to go to complete shit. But, that’s okay. I’m choosing to pretend I never made them in the first place. Sweeping it all under the rug, as they say. It’s great preparation for my pursuit at becoming the next Senate Majority Leader—I’ve been told that’s one of the main job requirements. Thankfully for you, I’ve been able to utilize the time not spent getting my ass in shape to take you on another stateside journey. Refill your Metrocards—we’re off to Brooklyn.

For fear of pissing off any New Yorkers—which is admittedly quite easy to do—I’m choosing to focus first on an individual segment of NYC, rather than “the city” as a whole. This way, Manhattan-dwellers can’t get up-in-arms about the semantics of who truly resides in New York City, followed by an argument with Brooklynites, not unlike one you’d hear in Times Square traffic, until they ultimately turn their attention to me and I’m “cancelled” for the next three years. So – now that that’s out in the open, yes, let’s talk about Brooklyn. When you hear ‘Brooklyn’, the first word that comes to mind is probably ‘gentrification’. Which is a ten-dollar way of saying ‘hipster’. Which is a twenty-five-cent way of saying ‘artsy’. And there is absolutely nothing negative about being described as “artsy”.

If you want to experience New York City, but don’t want to get stuck in the tourist trap of Times Square, with its incessant horn honking and occasionally-inappropriate street performers, go to Brooklyn. You’ll find yourself in a mecca of independent retailers—after all, do you really need to go into a 77,000 square foot Apple store with a 32-foot entrance cube made of all glass? That’s just asking to be demolished in the next Michael Bay film. In addition to all that capitalist mumbo-jumbo, you’ll find great spots to eat, friendly people and a thriving music scene for fans of almost anything. And because there are as many awesome bands as there are Facebook excuses enabling the right-wing agenda, The Rodeo is here to help sift through the rubbish.

If I were to cover all the great, lesser-known artists from Hipster’s Paradise, I would likely need an encyclopedia. So, for the sake of everyone’s time and sanity, I’ve painstakingly focused my efforts on just ten—a perfect soundtrack to your early morning, hand-crafted, artisanal vegan latte.

I know exactly what you’re thinking: “Oh great, here’s another list of The Strokes rip-offs…” Well, I assure you this is about as close to The Strokes as you’re going to get here. I’m afraid to even make the reference—it’s solely because of the recordings themselves which seem to radiate with that unmistakable New York City energy. The songs however, exist on a completely different plane in a completely different decade. This isn’t just an amalgamation of trendy shit. No, no. The four ladies in BOYTOY have enough snark to fill the Garden, but a sound fit for a basement show pushing the limits of the fire code.

The name Charly Bliss might sound familiar—they had a hell of a year in 2019, releasing the critically acclaimed Young Enough. The record created a ton of buzz thanks in large part to singer Eva Hendricks’ blunt lyrics and girl-next-door vocal delivery. With their debut record just a couple years earlier, they had naturally set some expectations, all of which they shattered with a nearly-flawless sophomore record. It’s catchy but serious. Fun as hell but stands for something. This is the dichotomy Charly Bliss effortlessly creates through their infectious blend of indie-rock and bubblegum pop. Put on your dancing shoes and get your hair up in pigtails—you’re in for a fun ride.

Swimming Bell is singer Katie Schottland’s wintery, at-times atmospheric, Americana solo project, which she has decked out, extremely successfully, with reverberated pedal steels and ambient soundscapes. And that voice!! Her vocals are so smooth and ethereal, at times they almost have a lulling quality to them. It’s the kind of music you can easily get lost with, deep in thought, imagining your life playing out like a contemplative scene from a hip, indie film. Somebody pinch me.

They may be broken up—or on indefinite hiatus, who even knows these days—but they’re still one of the most underrated bands in modern history and thankfully they’ve left you quite an extensive catalogue of quintessentially New York tunes to sift through. Their ‘90s-tinged, alt-folk got overshadowed a bit by the introduction of mainstream darling bands like Mumford & Sons and The Lumineers, but The Damnwells’ songs come off even more authentic as a result. There’s not a bad record in the bunch, but I’d recommend going back to their humble Brooklyn beginnings and giving 2004’s Bastards of the Beat a spin first—it’s simultaneously fresh and nostalgic if you’re into that sort of thing.

Claud Mintz—performing under their first name only—is a mere twenty years old. That’s important to understand before listening because it makes the insight they display that much more impressive. It’s also somewhat amusing as there’s a little bit of ‘80s in the music, a decade which obviously far preceded their time on this planet. Mintz wears their heart on their sleeve for the 8-song Sideline Star,which I can best describe as sad-yet-happy-yet-mostly-sad bedroom pop. Not only is the music addictive, but Mintz puts a lot into supporting the queer community they’re a part of, including raising money via standout track “Wish You Were Gay”—which, in case you’re wondering, is far superior to Eilish’s song of the same name. Long story short—the force is strong with the musical youth.

I can honestly say that Yoke Lore is one of my favorite discoveries in recent memory. Another solo transplant, this time from Adrian Galvin, formerly of Walk the Moon. Hopefully he’s getting some of that “Shut Up and Dance” money, but even if not, it’s safe to say he’s landed on his feet with a recent seal of approval from none other than T-Swift herself. Galvin’s main instrument is a banjo, but there ain’t nothing bluegrass about Yoke Lore. It’s a little bit M83, a little bit Tallest Man on Earth, and Galvin’s knack for writing melodies is up there with some of the greats. Yoke Lore is a beautiful example of genre-crossing, suited for both cinematic adventures and spontaneous late-night drives alike.

Alyse Vellturo had a pretty cool year. Not only was she named as one of Billboard’s breakout artists for the year, but her indie-rock outfit got to share stages with the legendary Jimmy Eat World for a small-venue stint at the end of the year. I had the pleasure of catching one of those sets, and Vellturo’s authenticity was intoxicating. With elements of Tegan and Sara, Soccer Mommy and the Pains of Being Pure at Heart, it’s safe to say pronoun has the potential to be the next indie-rock darlings.

Brooklyn isn’t just home to trendy indie rock and CBGB wannabes. It’s a diverse city, which means artists of all backgrounds are welcome. That’s the beauty of it. Argentina-born Tei Shi brings stadium-worthy electro pop to BK and has made quite a few high-caliber friends along the way—P Diddy and Blood Orange, to name a few. Her 2017 release Crawl Space listens like a natural influence on Billie Eilish and last year’s La Linda expands that sound with even more radio-worthy grandeur. Eliminate all preconceptions about the sounds of Brooklyn—this is pop music at its finest.

It would not surprise me in the least to learn that the gents in Bambara were manufactured in a lab by Quentin Tarantino and Nick Cave while on a soul-searching drug trip. Their rousing blend of gothic-western folklore is as intriguing as it sounds—I’m relatively certain they took a listen to Lord Huron’s Strange Trails and said “Hold my beer…”. The rest is history. So if you’re up for navigating the rough underbelly of New York City, Bambara is your go-to soundtrack, and it’s impossible to pull away from.

How do you describe a band that sounds like it was transplanted from the ‘70s, spoon-fed a diet of soul/R&B music, and sent to school with some indie-rock hard-knocks? Oh shit! Maybe I just did. Crumb is quite an enigma. The perfect adjective I can think to extend them is ‘groovy’—to which you’d rightfully respond “Ok, Boomer,” but I’m okay with it. And so there’s not much else to say. It’s just cool music with a unique vibe—and it speaks for itself, so might as well stop reading and start listening.

If you enjoyed the read, grab some more Rodeo HERE.