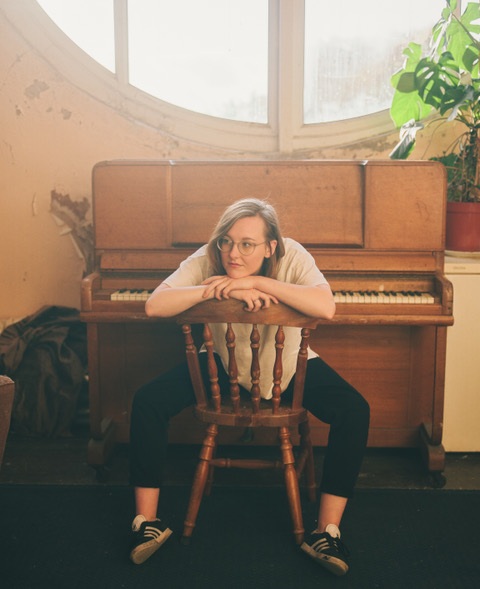 Yes, Lindsay Munroe is an allrounder when it comes to artistic endeavours. But, when she’s not recounting emotional hardship on breakthrough tracks like ‘River’ or revising theological histories through a feminsist lense as a MA student, the London-born singer focuses on the little things in life that bring her pleasure and keep her motivated. And hell, in what has felt like a three month grounding à la lockdown, I think we’re all in need of some tips on self-care.

With her upcoming EP, ‘Our Heaviness’ getting released on Friday, we spoke to Lindsay about her studies, songwriting and everything in between…

While these are strange and uncertain times, what have you been doing to keep your spirits high?

Running, rewatching TV shows, karaoke with my housemates in our living room, trying to keep some kind of schedule and a feeling of forward motion.

You’ve had to reschedule your upcoming headline shows in Manchester and London. Having lived in both cities, at which show are you most looking forward to performing your new material?

I grew up in London but didn’t start playing shows until I moved to Manchester in 2014. There’s nothing like playing to a home crowd and Manchester has become my home over those years. Playing more regularly in London over the past year or so has been great because my crowd is a combination of long-time friends and family mixed with new fans. It’s a fun combination; new folks to perform to and family to drink with after.

Your latest single ‘River’ is a beautifully introspective track. How do you channel your own experiences during your songwriting?

Apart from a few exceptions I tend to write in retrospect. Writing about emotional topics can be incredibly cathartic, but I’ve found that getting a bit of distance from an event or topic can provide the separation needed to be critical about my writing. I can channel a heartbreak whilst it’s happening, but in all likelihood, it will be too raw to work with. Writing months or a year after the fact you can see how you survived something, or the weird habits you developed; the strange specifics of a life. I guess that a song, for me, is often the culmination of my introspection rather than a tool for it. Plus, it helps to make all the overthinking feel worth it, making something out of all my navel gazing.

As a musician and a student, do you feel like your academic research informs your creative process?

I think so. My MA research focuses on Feminist Theology, but the general academic discipline is very holistic. It’s not a dry, bookish environment. We’re encouraged to start our research from personal experience and talk about the emotional and social effects of the topics. So it all spills over. Whether I’m writing an essay or a song, it’s likely that I’m doing it out of a personal preoccupation with the topic.

How has your relationship with music changed since you began writing songs?

It’s a relationship that’s constantly changing as I learn more about music and song writing. Once you’ve really struggled to write a song it makes other peoples’ successful tunes seem even more miraculous. But the real changes in my relationship with music have come through connection and personal need rather than music theory.

Your single ‘Mirror’ recounts your experiences with body image and television; how do you feel that ‘old’ (e.g. television) and ‘new’ media (e.g. social media) affected your life growing up?

The lyric from Mirror ‘pictures on a TV screen/I was too young to know what they would mean’ came from the reflection that we start consuming media basically from birth. ‘New’ media had a much more significant impact on developing a negative body image as a teenager, especially the ‘clean eating’, ‘fitspo’ world of Instagram. I wonder, though, if I would have been so susceptible to that world if I’d seen more than one type of woman on basically every TV show. I took a 4-year break from Instagram and learned a lot about critically consuming media, but we’re absolutely seeped in it so it’s hard to step away from. I think the trick is learning how to engage with it on your own terms, questioning what you’re consuming rather and blocking what you need to block.

Another of your singles ‘Split’ was recently praised by Sharon Van Etten. Who would be your dream artist to collaborate with, musician or otherwise?

Sharon Van Etten has actually always been my go-to answer to this question. I’ve learnt so much from her music and willingness to explore non-musical endeavours. I also like the idea of collaborating with someone who approaches music from a more instrumental and theoretical angle, like Nils Frahm or Olafur Arnalds.

And who inspires you as an artist right now?

I’ve been hugely inspired and encouraged by Rachel Sermanni’s gigs every Tuesday, as well as her new podcast. She’s a brilliant Scottish songwriter and shares her songs as well as different poems every week. Joining in those live streams feels like a spiritual gathering in some way, they always leave me so calm and connected.

Your new EP Our Heaviness is out June 19th. What can listeners expect from the project?

I wrote Our Heaviness over a 6 month period that included a relationship breakdown and a decision to leave the conservative religious environment that I was a part of. The record is a reflection on the process of deconstructing a life and building it back, stronger from new foundations. Instrumentation varies from lush synths to sparse, off kilter sounds to reflect that.

Listen to Lindsay Munroe on Spotify and Apple Music. Oh, and if you enjoyed this, check our our print magazines HERE.