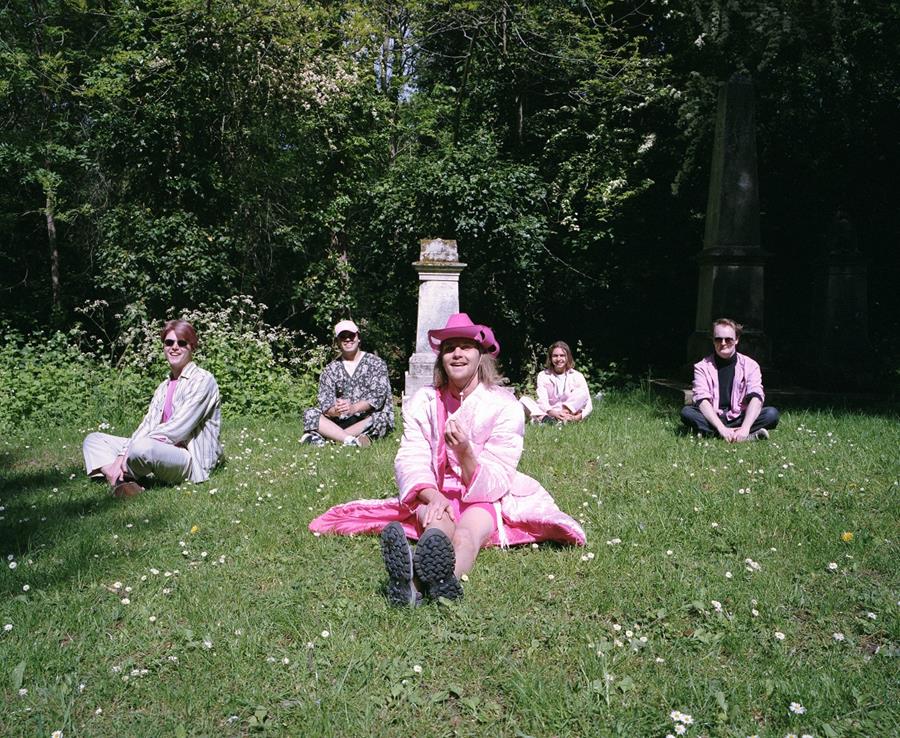 Track of the Week: Tiña – Rosalina
‘Rosalina’ is a welcoming first single for Tiña’s upcoming debut album, Positive Mental Health Music. It’s quite intimate and yet also quite isolated, simmering in surrealist vulnerability as the band members play their drony, dreamy indie. The lyrics are macabre, imagist pieces that marry the real and the not-so-real. The music video that accompanies the track shows the band playing together over an iPad – both an artistic and a practical choice, representing the ominous, lonely lyrics while also being an obvious requirement under the current situation. If ‘Rosalina’ is anything to go by, Tiña’s upcoming album will be one to watch out for.

A. Swayze & The Ghosts – Cancer
I’ve said it once and I’ll say it again. We are living in an Aussie takeover and A. Swayze & The Ghosts are no exception. The Tazmanian punks give us four minutes of energy, drum beats, and a bassline that gets the heart a-racing. They’re going to make you hold you hearts and fuckin bop all night.

Clea – Sugar
With a cup of tea I always have two sugars, and when I listen to Clea I have to listen to ‘Sugar’ at least twice. A delicate tune from down under, ‘Sugar’ touches on the disconnect we have from the world’s suffering, and does so in such a touching way. Such an easy and ethereal listen, perfect for the chill after a humid day. Also, the red dress from the video? Stunning.

Cults – Spit You Out
It’s delightfully weird. The track has distinct lo-fi vibes, with Madeline Follin’s distant vocals surrounded by drumbeats and hazy synths. Accompanying the track is a bizarre video which features Follin eating a variety of foods against multiple backdrops. Which is of course inspired by viral YouTube trends ASMR and ‘mukbang.’

Haux – Accidents
The latest single from his upcoming album Violence in a Quiet Mind, “Accidents” is a soft and atmospheric. With stripped back keys, drums and guitars, “Accidents” mixes ambient sounds together with folk influences to create a reflective track. For fans of melancholy indie-pop.

Josie Pronto – Burner
‘Fuck it, Imma live in a cave’ is the motto we needed right now. The playful indie-pop is here to take you out of the digital world and into the world of Josie, which we can all agree is far more fun. With the blue skies outside, you can never go wrong with ‘Burner’s jaunty piano, catchy chorus, and overall good vibes.

Kllo – Somehow
Kllo delivers such a refreshing dip in the audio pool with Somehow. If electronica had a spectrum, they would be the polar opposite to 100 gecs, giving you a calming pace and lush vocals that just get you swaying.

Kelly Lee Owens – On
Kelly Ethereal Owens. The fade from sweet pop to a pulsating beat is a transition close to Kelly’s heart, from the sadness of a breakup to being joyously liberated. In its five harmonious minute, ‘On’ propels you on a journey and Kelly’s angelic vocals only add to the high.

Lindsay Ell – wAnt me back
Lindsay gives up the most important 3 C’s in music with ‘wAnt me back’. Classic. Country. Completely singing your heart out with a hint of nostalgia as we’ve all had the moment of ‘you ain’t gonna do better than me’. Lindsay absolutely sells this tune, with her powerhouse vocals and it’s catchy chorus, it hits that spot of country love inside of you.

Lynks Afrikka – How To Be Successful
An all around synth sensation. Throughout lockdown Lynks has been keeping me sane, first with Lynks’ Self-Isolation Tapes and now this unapologetic banger. Dripping with sarcasm, ‘How To Be Successful’ gives an insight into what will give you the perfect life, and while doing so, gives the urge to groove about your living room.

Mysie – Gifts
South London’s Mysie has dropped ‘Gift’ – a brooding, cautionary tale about manipulation. “You’ve got a gift for reading me” she sings, which in any other circumstances would be seen as sweet. And the rolling jazz rhythm and synth-based atmosphere tells you it’s sweet, leading you down a different path whereas the real aim is to read between the lines. Mysie’s melodies are infectious, and she jumps lightly from word to word within off-kilter verses which then break out into richly-layered choruses. “You’ve given up too much and now you need to get out.” explains Mysie on the track. Well, with ‘Gift’, Mysie’s given much and left us wanting more.

Natasha Bedingfield – Together In This
If anyone is going to bring us out of lockdown in one piece, it is Natasha Bedingfield. Although it is for the animated feature ‘ Jungle Beat:The Movie’, it’s a tune that is fully relevant for right now. ‘Together in This’ is such a pop pick me up, blending in fun and the sun, and after a listen, everything around you seems that little bit brighter.

Nijuu – ‘회전문 Revolving Door
‘Revolving Door’ gives another side to Nijuu. The lo-fi dream-popper instead thrills us with a smooth piano and almost whispered lyrics. At times, it feels as soothing as when it hits 2:00AM in Animal Crossing. An 8-bit delight!

Sad Funeral – Kazbeg
Adam Kane’s solo project has delivered a track is full of escapism, plucking you out of your normal life and into the calming mountains of Kazbeg. In its dreamy instrumental and Kane’s mesmerising vocals, it takes you to a higher altertude and fills you with a growing that you’re going to be okay. Get rid of your Headspace app, this track is just as relaxing.

Thumper – Topher Grace
“The song is about going out on the rip as an act of self-destruction” explains Thumper frontman Oisin Furlong, on their latest track ‘Topher Grace’. “I wanted to see if I could free myself of the songwriting crutches I would normally reach for – like structure and melody – and replace them with a more considered approach to lyric writing and performance.” Furlong has achieved that. It’s a track akin to the melodics and lyrical grit of say, Courtney Barnett or Nick Cave. Swinging from ‘sincerity to hyperbole’ in the words of Furlong, the video for ‘Topher Grace’ pays tribute to Samuel Beckett’s ‘Not I’ – the long monologue where all you can see it a disembodied mouth. This kind of absurdism acts as a springboard for Thumper’s heady mix of quick-fire poetics.