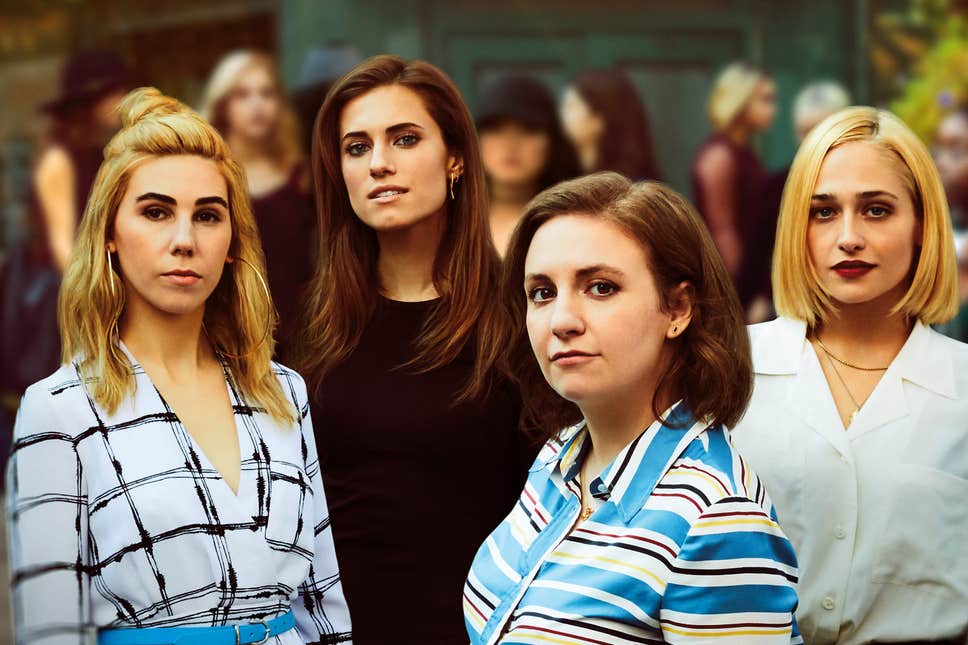 The world is bored. I am bored. So bored, in fact, that I’ve been watching horror films just to feel something besides the monotony of my new existence (cheerful, eh?). When that failed, I turned to nostalgia, a bittersweet remedy which many of us will have pulled upon of late: the film we once knew line-by-line; the playlist that soundtracked last summer; the Monopoly board reeking of Christmas fallouts.

A strong contender for my favourite TV shows, GIRLS was what I returned to… again. I like to consider it a sort of Sex & The City for twenty-somethings who don’t have it figured out yet. Hannah, Jessa, Marnie and Shoshanna were my Carrie, Samantha, Charlotte and Miranda: relatable, honest, funny and also (as chance would have it) living in NYC. The lines are iconic, the characters are as unique and complicated as you can imagine, and – needless to say – the music is also a fucking treat.

Plastering a couple hundred sheets of the word ‘SORRY’ onto a brick wall in midnight NYC is a pretty extreme way of apologising for yelling at a driver – then again, it’s more meaningful than a few tulips, right? Having accepted the apology and agreed to help plaster a few more sheets at the top, Hannah finds herself on Adam’s shoulders (flashbacks to festival summer nights ensue). It’s an odd, strangely lovely snapshot of their relationship. As Adam suddenly runs in the direction of home – Hannah clinging onto his head all a-giggle – The Vaccines break in with the fierce and loud opener to their debut album, a sound as frantic and passionate as they are. Whenever I hear this song I think of what I now deem the epitome of restless young love: bounding down New York at night on the shoulders of Adam Driver.

Something about the simplicity and poignance of this scene always really struck me. Having lost her dream job in Tokyo, Shoshanna is faced with returning to her boyfriend, friends and old life back at NYC. Glumly taking in the last of her time there, she stands expressionless on the balcony to her cartoon-like Japanese flat. As the soft tones of BØRNS play in the background, a clear thought appears to strike our beloved Shosh – the tiniest hint of a smile shows as she turns back into the flat to remove the clothes from her suitcase. Cut to loving boyfriend Scott, donned with flowers and a handmade ‘welcome home’ banner at the New York airport. Flowers and sign are binned as the last passenger walks through the tunnel – credits roll as the beat to ‘Past Lives’ kicks in. Epic.

‘You’re breakin’ my heart, you’re tearin’ it apart so fuuuuuck you!’

This is EVERYTHING. The dance routine, the counter-top choreo, the bright green bikini – I yearn for the day I can get wine drunk at a beach house with a big group of mates. Having invited a quartet of gay friends back to the house, the outcome is a colourful, hilarious and flawlessly executed Broadway rendition of ‘You’re Breakin’ My Heart’. Even Marnie removed the stick from her arse long enough to dance along.

In one of the most painful and gut-wrenching moments of the entire series, a heartbroken Jessa seeks comfort in returning to her old ways. At first, this scene seems an almost exact duplicate of one from the first season: strutting down the street with a cig in hand, hopping into a bar to hook up with a stranger in the bathroom. This time though, she can’t go through with it. Gone are Jessa’s self-destructive, explosive moments of solace – the man she loves doesn’t want her and the old coping mechanisms can’t fix it. This is a huge and crucial turning point for Jessa’s complex character, and watching her go from dangerous to devastated in a matter of seconds makes the song choice feel utterly tragic.

So. You meet with an ex-boyfriend to confess you have tested positive for HPV, a difficult conversation overshadowed only by his own admission that he is now gay. Shock turns to anger, reminiscing turns to insults – this would be a whirlwind for any of us, let alone drama-centred Hannah Horvath. Hours later, she sits on the bed trying to compress her muddle of emotions into a single Tweet (too real). As Robyn’s iconic sad-gal pop anthem ‘Dancing On My Own’ comes on Hannah’s playlist, Marnie comes home to find her dancing her heart out in the bedroom. “Wassup!! Oh my God, Elijah’s gay.” They laugh and dance at the absurdity of the situation – of course Elijah is gay, “He seemed gay!”. This scene is as pure, honest and real as they come: sometimes all you can do is laugh with your girls and dance like crazy in the safety of your bedroom.

Enjoyed this? Why not pick up one of our print magazines for more exclusive creative content – grab a copy HERE.