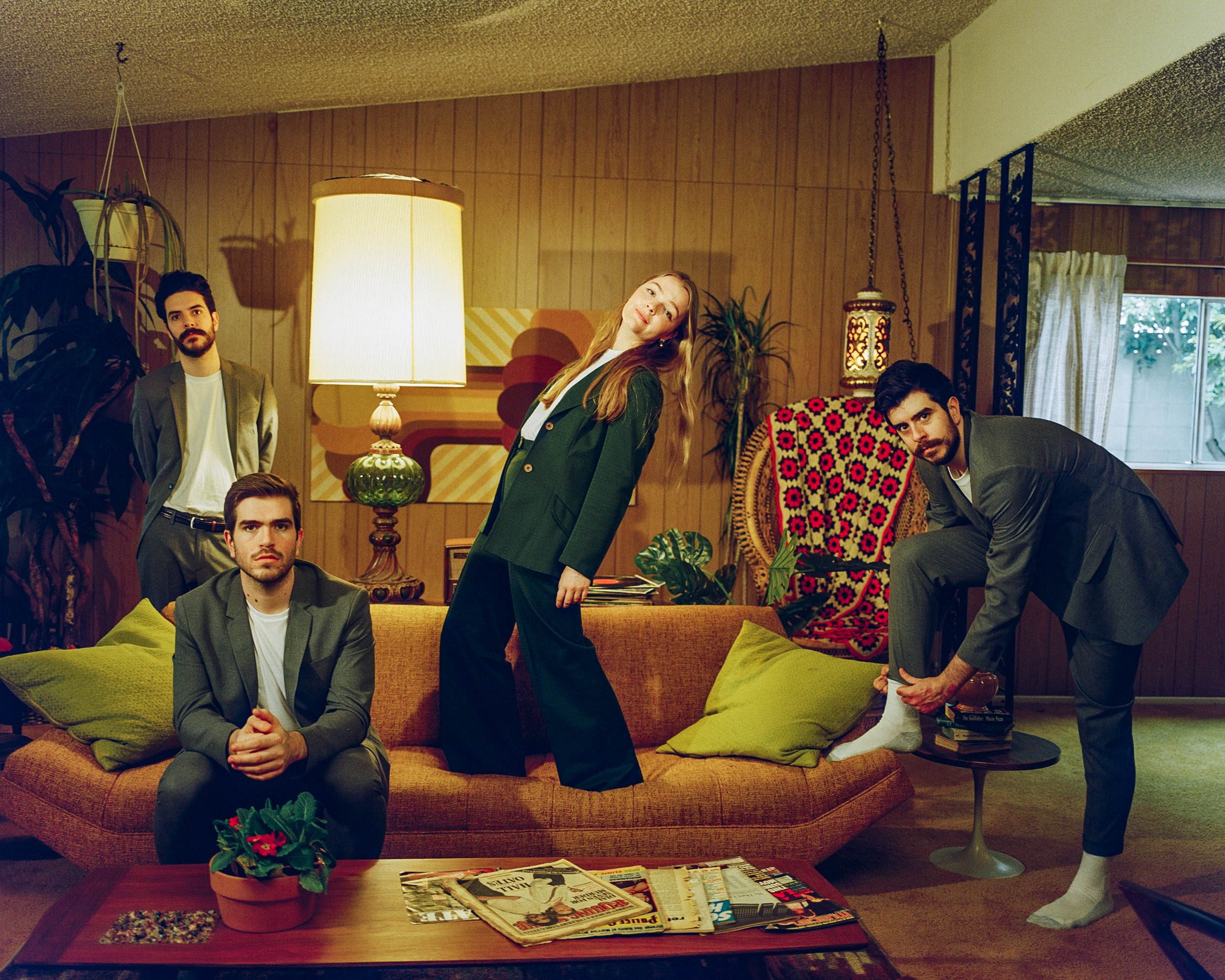 Dizzy talk us through Canadian suburbia and their brand new album

If you dive beneath the beautiful landscape and economically driven society of Ontario Canada, you’ll find Oshawa – once home to the hub of Canada’s General Motors business, now home to indie dream-pop band Dizzy, whose upcoming album will undoubtedly open up a number of conversations.

Dizzy’s The Sun and Her Scorch is a hazy and tranquil record which openly discusses suicide, loneliness and the problems of growing up on the outskirts of a big city. Eager to know more, I caught up with lead singer and lyricist Katie Munshaw on a transatlantic phone call, hoping to uncover the meaning behind her lyrics and what led her to discuss such difficult topics so honestly.

“I don’t think it was a conscious thing,” she begins. “I think I was drawn to writing about those things because it was what I was going through at the time. When I was going to write this record, I went in with the idea that I had to write songs about romantic heartbreak. That’s definitely not what I was going through at the time, luckily, but I think that I did have to figure out other ways to get songs out of me – I think one of those ways was to dissect all the ways that I’m sad in other aspects of my life, and one of those things is being afraid of death [which] I touched on a lot in the album. I think the happier sounds came from the production side; it wasn’t really a conscious thing.”

Munshaw is bracing in her apparent self-assessment. She talks frankly about her struggles, her opinions of herself, and how these aspects (alongside touring and relationships) have been a poignant and important part of why she could express these feelings lyrically – not to mention in the name of the record itself.

“The Sun and Her Scorch came from a lyric in one of the last songs, called ‘Ten’,” Katie explains. “In the song, it’s referring to the sun and the actual scorch and heat of it. In relation to the album, I thought it was a pretty good metaphor for myself and the way I’m kind of an arsehole sometimes.”

The album is set for release at the end of July, but the band have had to adapt to a new climate of promotion; having to release and promote singles online, then following that up with online interaction, was something Katie had to get used to: “It doesn’t feel real. Usually when a single comes out you can go play a show or go and meet somebody and see what they think about it that way, but reading comments is a little different. I guess it will be something we just have to get used to for a while.”

“It’s been nice (interacting online with people),” she continues, “especially with one of the latest singles – a lot of people shared their stories. I think people felt able to share their stories from behind a screen, so that was really nice, actually. People do come up to us at live shows, but it’s not usually that personal.”

Where we grew up definitely drew us to what we write about.

The single which seems to have sparked most of the online interaction between Dizzy and their fans is ‘Roman Candles’, a song about the anxiety of pursuing a career in the music industry – something musicians often shy away from, but which Katie finds particularly important.

“I think I just had a really rough mental go; I think a lot of musicians can relate to that – not being sure if you’re making the right decisions. I mean, I’m in my twenties now and I’m not going to be here forever, obviously: I do worry about my future and when I’m going to start a family and support them. Watching my friends starting to do those things sparked a lot of jealousy in me, so I think that’s where that song started.”

Munshaw seems to have found reassurance in the songs on this record, using it as a cathartic step back to look at herself and how she has been influenced by the Canadian suburbs. “I think most of that came when [the songs] were done, and I had them all separated into categories. Now, if I ever feel myself falling into those categories, I can sort of pull myself back out.”

“I live in a city where a lot of the focus is on sports, a lot of hockey families – I actually grew up in one. I think this city has impacted on me growing up, and a big part of ‘Roman Candles’ is Oshawa. Music isn’t really something that you pursue here, it’s not really accepted: the standard is to go to school and get a standard nine-to-five job and settle down pretty quickly. I think the norms here creep into our music pretty often. Where we grew up definitely drew us to what we write about.”

The single release was accompanied by a video filmed in lockdown in which Munshaw dances in a field and outside a motel, finishing with a spectacle of fireworks. Lockdown in Canada has started to ease, but the experience of filming a video in that environment is one most bands will never get to experience – and one Munshaw will not soon forget.

“We did a socially-distanced video, so it was very odd; the cameraman was on one of those wheelie things that you stand on. It was very odd not having the band there and just being me in a field by myself. We had to work with what we had, there were a couple of bigger ideas which had the band more incorporated, but it just wasn’t possible to get us all together at the time. I think it turned out the way I wanted it to – I like the contrast between the motel scene and the field because the motel scene really represents what it’s like to be on the road in my position.”

Dizzy’s debut release, Baby Teeth, came just before a huge world tour, one which broke up the writing process and allowed the band to refocus. Second-album syndrome is a downfall of many bands, but Dizzy decided to put fate into their own hands, taking control of the whole writing and production process.

I think there are other ways that the heart can break, and one of those ways is you can do it to yourself by being a jerk.

“It was pretty natural; we were on the road for about a year and a half after the release when we decided to start writing again. We went up to Northern Ontario and really naturally just brought all our own ideas, so everything flowed really well,” she explains. “There was a difference with this record because we decided to self-produce it, which was a ton of work but definitely rewarding – it was very different to the first record.”

Baby Teeth was very commercially successful, winning the Juno Award for Alternative Album of the Year in 2019. The pressure of living up to their debut’s success was very much on the band’s mind, overshadowed only by Katie’s efforts to better understand herself.

“I think I felt a lot of [pressure] in the first record, but I think on this record it’s more complex than that. I realised after touring for so long that there were patterns in myself that I wasn’t loving; I was searching for romantic heartbreak songs and I wasn’t going through that. I think there are other ways that the heart can break, and one of those ways is you can do it to yourself by being a jerk. Once I started realising those patterns in myself, I [noticed] a lot of the reasons I was feeling this way were my fault.”

Once live music does return, Dizzy will be keen to pick where they left off: a support slot around Europe in which they were exploring new places and getting a chance to try out some of their new material. “I’ve got a general excitement just to get back out on tour, but we were on tour with Oh Wonder through Europe when this all happened. We were just about to go to Germany, and I love Germany; I think German crowds are the best crowds, they’re always dancing, they’re always so positive and welcoming. I can’t wait to get back.”

Writing songs about heartbreak, depression and suicide invokes emotions amongst all of Dizzy’s fans, but performing those songs must make Munshaw relive those feelings every night. I was intrigued to learn how one separates themselves from the emotions they originally felt when writing the songs.

“Well, I haven’t performed some yet so that is hard to answer. If it’s anything like heartbreak songs I’ve sung in the past, and having to open that up every night, I don’t think it’ll be too hard – when you sing something every night you just kind of get numb to it. I think the hardest part is meeting people at the merch table and hearing stories: people sometimes can share a lot and it’s a lot to listen to and take in, but obviously I enjoy that. It’s a good feeling to get people to open up when they haven’t before.”

Dizzy confront the troubles of life both as a musician and as a young person in suburbia, using lockdown to ignite a new wave of online support. Between the success of Baby Teeth and the fantastic prospects of the new record, I have no doubt that the buzz around Dizzy will only grow louder – just as it should.