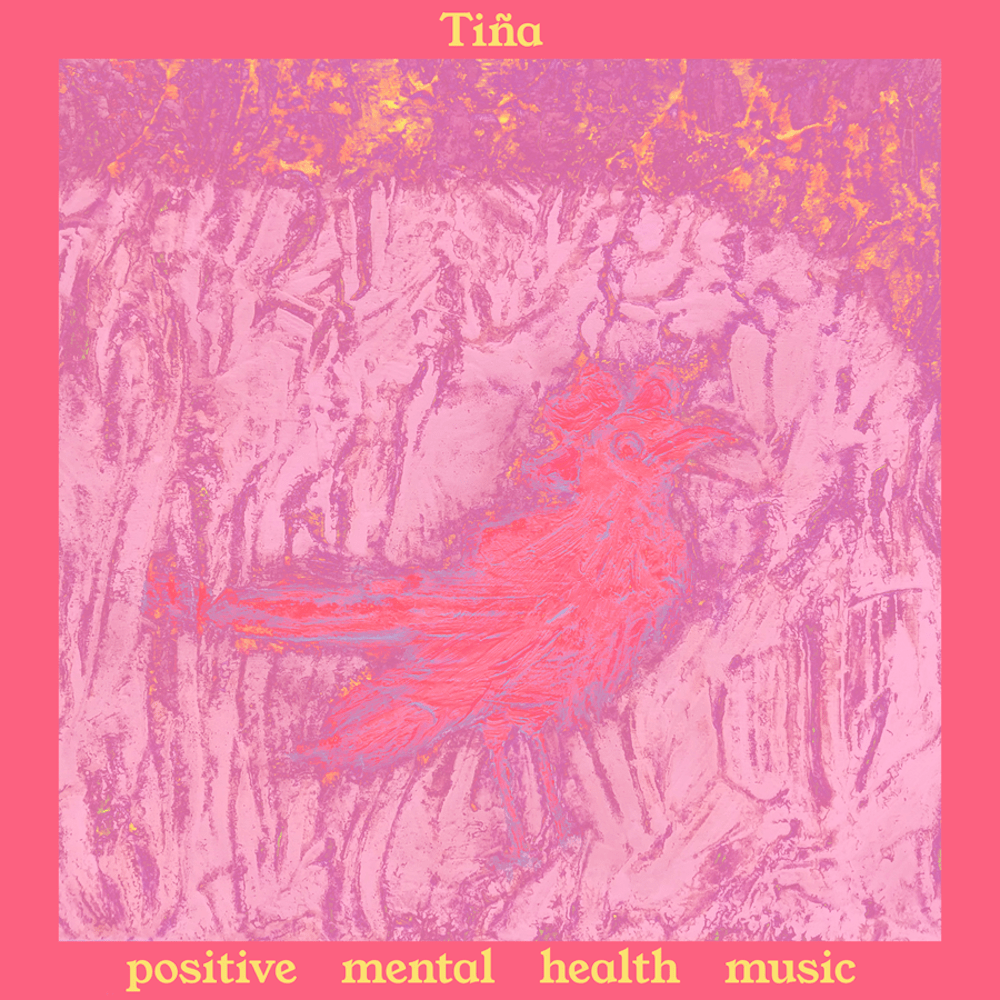 As the title plainly references, ‘Positive Mental Health Music’ is an album built on the premise of coming to terms with your own mind, and finding acceptance in its flaws as well as strengths. Tiña’s frontman Josh Loftin reportedly wrote the record as a means to process a mental breakdown, and each song reflects a facet of this in some way. There’s a strong sense of self-awareness too – the album is basically announcing exactly what it’s about – there is less emphasis on having a serious image, and more knowing winks at what being musicians should be. This is exactly what Tiña are aiming for, dispelling the illusion of rock bands being untouchable cultural icons, in favour of creating relatable and gratifying music that speaks to everyday existence.

‘Buddha’ and ‘I Feel Fine’ are good starting points to get a flavour of Tiña’s liking for the strange and quirky. The former uses the repeated refrain “This is fine” to wash away the dissatisfaction of listing minor flaws and comparing yourself with the success of others. It’s a song that draws catharsis from fighting self sabotage with acceptance and love. It ends with Loftin expressing “I hope that this song does something for someone, and if not at least I wrote a song”, once again enforcing the power in the transparency of his songwriting. ‘I Feel Fine’ features twangy guitars that spiral in sound, over a sexually-charged chorus. It’s a weird whimsical song, but a banger nonetheless. The fact it fits so perfectly into the album proves the point of Tiña’s wholly unique musical identity.

There is a deep sort of nihilistic philosophy that runs through the album. ‘Growing In Age’ stands out for its lambasting of a growing loss of sincerity and empathy in society, with Loftin growling “it’s like a hug will kill us all”. ‘Golden Rope’ references imagery of suicide, but tells a story of recognising the value of having both deep tranquility and chaotic silliness in your life. Tiña is creating a sense of emotional freedom in the meaningless indifference of life. ‘It’s No Use’ takes us further down this road, expressing a message of giving up, but juxtaposed with a beautiful acoustic guitar and violin soundscape reminiscent of the style of Radiohead.

‘Dip’ and ‘People’ make full use of Loftin’s falsetto, another tool in his belt. They also operate well as the albums closer after the darkness of the previous tracks, showing the light at the end of the tunnel. Standout track ‘People’ is about… well… people. More specifically, the comfort and necessity of community in moments of strife and struggle. The plonky high note piano keys and warm synthesizers fill the song with a sense of simplicity and hope. Loftin confesses “People, people, I seem to have missed you somehow”, emerging from his own sadness and embracing the confusing but ultimately healing nature of the outside world.

Tiña’s new album feels like an elaborate painting slowly coming into view, brush stroke by brush stroke, with each little colour and shape adding more meaning and clarity to the bigger picture. Equal measures specific and universal, Tiña’s music completely speaks to the modern age, where individual acts of self-love and discovery are judged intensely by others. Everyone’s a critic (and the irony isn’t lost on me here), but Tiña comfortably throws this notion out of the window. Loftin targets his topics by writing and singing with honesty, and the melting pot of influences the band clearly has is a great vessel for their message to set sail. Tiña aren’t reinventing the wheel, but what they are doing speaks to a grander idea of what music can be – life affirming.

Haiku review
When life gets you down,
Put on your pink cowboy hat,
Give Tiña a spin