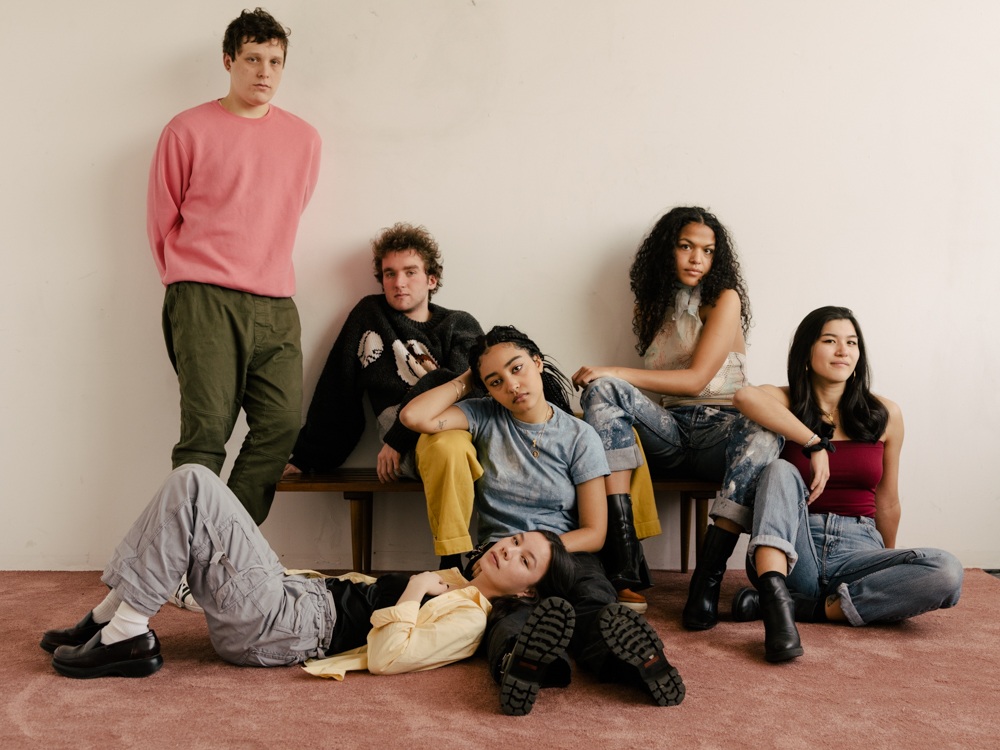 Ones to Watch: Q&A with MICHELLE

A majority queer, POC band, MICHELLE are an all-conquering collective from ‘the city that never sleeps’. Jamee Lockard, Layla Ku, Sofia D’Angelo and Emma Lee take care of vocals while Julian Kaufman and Charlie Kilgore look after production and arrangements.

They sound like the sun setting on Central Park, blinding rays creeping through the canopy of trees. Having teamed up with Arlo Parks this year, and with a UK tour set for the New Year, MICHELLE are making waves on both sides of the pond.

What was your highlight of 2020, musical or otherwise?

Julian: Releasing more MICHELLE music. That was really the only thing that kept it going strong.

Charlie: The little outdoor, mask-on, acoustic guitar and dinky casio keyboard-based writing sessions we had in the little courtyard outside my apartment building this summer.

Sofia: We just spent two weeks together at a house in Long Island writing music and making food and enjoying each other’s company. That’s definitely a highlight for me, especially since it came after not seeing each other consistently IRL for nine months.

Jamee: We have another single (or two?) coming out at the beginning of 2021, and then we’re releasing our second album soon after! And hopefully (pandemic permitting), we’ll be touring Europe in May of 2021!

Layla: The future is so cloudy that we can definitively say anything other than what Jamee mentioned, but I’m hoping it involves a global recovery from this pandemic and a massive creative renaissance in its wake.

What’s the best advice you’ve received as a musician?

Julian: Timing is everything. Your groove, your punctuality, and your intentionality on when you release or don’t release.

Charlie: Not everything has to sound as good as it can on its own, but just has to fit into the big picture as well as it can.

Layla: Stop thinking so much. Music isn’t an equation to solve.

You relaunched your debut album in the UK this year, how was the reaction?

I saw Let’s Eat Grandma remixed ‘THE BOTTOM’ and you also collaborated with Arlo Parks, would you say you have a strong knowledge of the upcoming British music scene?

Sofia: I personally have always tried to keep a finger on the pulse across the pond. When I was growing up I would listen to BBC Radio 1 and show my mom all the cool artists I hadn’t yet heard on American radio.

How strange was it having these transatlantic contacts and projects but having to stay at home?

Emma: The strange part is not the staying home, I’d say that is more sad. There are so many ways to connect and create with people who are far from you, so it blows my mind less that we haven’t met these people in shared spaces, and more so that there is a prospect of meeting at all. It’s the growing of these connections that is strange, often feels unreal.

Layla: The thought that we are relevant to anyone or any scene outside of ourselves is a really bizarre notion. I still feel like we’re the kids trying to curb city summer stir-crazy in Julian’s bedroom, but now we have a following and an audience and a bit of smoke is being blown every now and then. I just hope to make these connections with individuals and communities in real life soon, so as not to feel so out of touch with the folks giving our work the attention.

Turning away from music finally, how did you feel when it was announced Biden had won the election?

Jamee: It felt like a sigh of relief, but not a cause for celebration. Joe Biden is the lesser of two evils, not a silver bullet. Under a Biden/Harris administration, we will still have to fight against injustices such as police brutality, ICE, systemic inequities, the climate crisis, etc. That being said… fuck Donald Trump. He won’t be missed.

Layla: I pray that a Biden/Harris win doesn’t incentivize people to kick up their feet, politically and socially. We were really provide with the absolute bare minimum this election, and while it will always be Fuck Trump Forever, that doesn’t mean we’re in the clear. Speaking to Jamee’s point, the next administration has a lengthy history of enforcing harmful judicial practices, bolstering racist legislature and destructive environmental policies. Now is not the time to get comfortable. It’s the time to hold them accountable and demand a presidential term that actively approaches the detriments faced by this country and its people.

Listen to MICHELLE on Spotify and Apple Music.