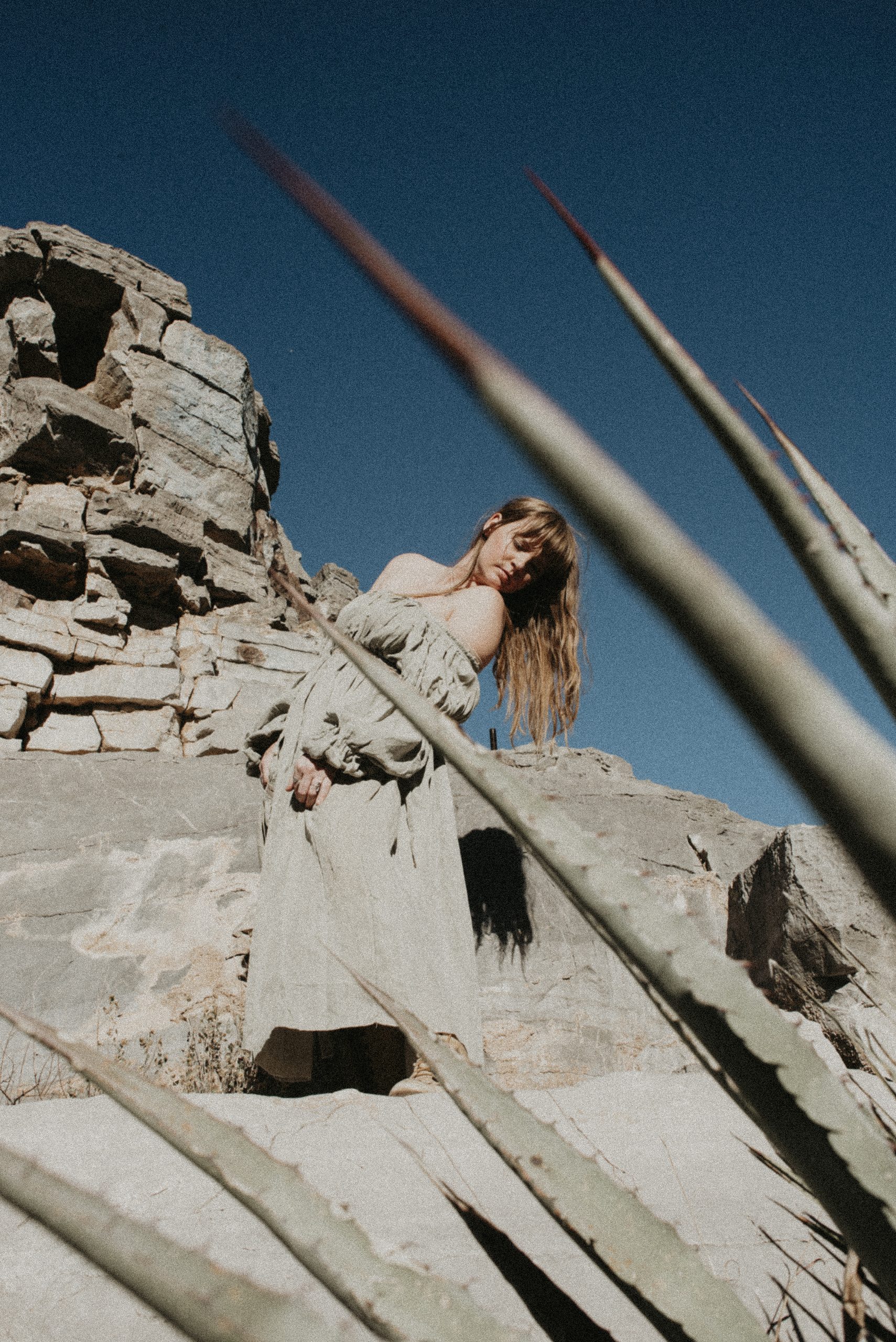 Courtney Marie Andrews plays Gorilla, Manchester on October 26th. Ahead of this, we delved into the print archives and dug out this interview from Volume 9, available to buy HERE. There’s also a competition to win a pair of tickets on our socials right now. Enter HERE.

A bouquet of flowers never looks as good as the day you first receive them. They gradually wilt, shed their petals, and remain mostly ignored until finally, they’re tossed into a compost pile. You weren’t expecting this to start on an uplifting note, were you?

On the heart-wrenching title-track from Courtney Marie Andrews ‘ forthcoming record, she repeatedly sings ‘You can’t water old flowers’. This declaration is both a blunt reminder of the inevitability of change, and a perfect motif for the record as a whole.

“When I started writing the record, I’d recently gone through a lot of changes,” Courtney admits. “I’d moved to Nashville from Seattle, where I’d lived for about seven years, and I was going through a breakup – that relationship lasted almost my entire twenties.

“When I was writing, I couldn’t focus on anything else in my life so a lot of the songs came from a moment of cathartic release; [it was] like I needed to write them. If anything felt hard to write, I didn’t finish it. Everything you hear on this record is something I finished in under 10 to 15 minutes,” she laughs. “That’s not to say that’s how I’ve always written records. But, because I was going through so much inner turmoil, if I wasn’t feeling it that day, I didn’t force myself to write. It was so inspired in a lot of ways because I was just purely emoting.”

Listening to Old Flowers is like catching up with an old friend. It’s as if you’re right there in the room, listening to Courtney tell her stories one-on-one. Lyrics like ‘Do you remember that night in Nashville? / I took you dancing with my friends / Maura taught you how to two-step and then you took me for a spin’, invite you directly into her narrative, like you’ve been acquainted for years. These heartwarming lyrics, paired with Courtney’s powerful vocals, combine to create a sense of road-worn melancholy that’s instantly relatable.

Courtney Marie Andrews cemented herself as a vocal powerhouse from track one of 2018’s May Your Kindness Remain, a critically-acclaimed record that seemed to grow her audience exponentially. Her vocals remain front and centre on Old Flowers, but overall it’s much more subdued than its predecessor.

I wanted the focal point to be the lyrics and the vocal. So, we approached it that way and tried not to add things that weren’t needed in the process

“I’ve always gone by the ethos that I never want to make the same record twice. I wanted [Old Flowers] to feel like an intimate conversation. I wanted the focal point to be the lyrics and the vocal. So, we approached it that way and tried not to add things that weren’t needed in the process.”

The record thrives off this minimal approach, with just three musicians performing on it: multi-instrumentalist Matt Davidson, percussionist James Krivchenia, and of course, Courtney herself on vocals, guitar and piano.

Limiting the number of cooks in the kitchen helped create a refreshing cohesion from start to finish; in today’s ‘playlist culture’, that’s certainly more than welcome. Standout tracks ‘If I Told’ and ‘Ships in the Night’ are stripped almost entirely to a single instrument and Courtney’s commanding voice. This sense of sonic intimacy was consciously sought after in the studio in order to best complement the personal nature of the songs – the way the trio approached tracking had more in common with a live show than a traditional studio session.

“Matt Davidson and I would just do sets of the songs. We’d play six songs in a row and if we were feeling one in particular, we would play it again. It wasn’t about getting the perfect take, it was about whichever take we felt the energy of. We didn’t work tirelessly on one song. We played [the songs] like a show in the studio, then we listened back later and found the magic take.”

Recorded in the recently opened Sound Space studios in Los Angeles, this approach allowed Courtney to emulate a ‘live-on-the-cutting-room-floor’ sense that harkens back to classic-sounding country records – you know, back when the genre’s sole ethos was ‘four chords and the truth’. In that sense, Old Flowers is her most country record to date. ‘It Must Be Someone Else’s Fault’ has hints of Emmylou Harris’ recognisable charm and penultimate track ‘How You Get Hurt’ is particularly vulnerable.

Courtney’s songs have always been rife with these raw, Americana qualities though. She cites storytellers like Joni Mitchell, Neil Young and Lucinda Williams as a few of her songwriting mentors. Vocally, she references Nina Simone and Aretha Franklin as a few of her indirect teachers. But, in reality, Courtney was entirely self-taught, which makes her powerful, well-refined voice all the more impressive.

I started to sing when I was a child. My mom said that I loved it and so she would take me to a karaoke CD store – back when those used to exist!

“I started to sing when I was a child. My mom said that I loved it and so she would take me to a karaoke CD store – back when those used to exist!” Courtney recalls, fondly. “I would put a karaoke CD in my boombox; I learnt how to sing that way. I also really loved to write poems as a kid, which I thought were songs but they didn’t have melodies yet. When I got a guitar, I kind of realised you could do both.”

Courtney began touring and releasing her own music in her teens. And, whilst gigging in her hometown of Phoenix, Arizona, she had an unexpected encounter with a local favourite.

“Jim [Adkins, Jimmy Eat World] saw me at a show and asked if I would sing on their record Invented – I did, and then I started touring with them. At that point I’d just done these DIY tours and this really taught me how to tour in a bigger way with a bigger team.”

Eventually, Courtney’s own records started doing well, receiving more and more praise with each release. As a result, Old Flowers has been highly anticipated since its announcement, aided by the release of a pair of chill-inducing singles. Originally set for release last month, the decision was eventually made to push the release date back to 24th July.

“I feel like everybody’s going through this right now, and it’s super important to do things together. My team told me they thought it would be better to push it back so they’d have more time. Also, now the record stores will have access to it when it’s first released.”

Maybe we’ll all discover more about ourselves as artists and it could be a positive thing, but I love traveling and playing in rooms with people. That’s why I’ve been doing it for so long and continue to do it!

In addition to the release, Courtney had an extensive tour planned with The Tallest Man on Earth. Like most gigs, it’s inevitably been postponed until next year, leaving the singer-songwriter without a travel route for the first time since she was a kid. Despite all that, Courtney is positive about these necessary adjustments.

“This is the longest I’ll ever not be on the road for my entire adult life. Maybe we’ll all discover more about ourselves as artists and it could be a positive thing, but I love travelling and playing in rooms with people. That’s why I’ve been doing it for so long and continue to do it!”

To fill that void, Courtney is setting aside time to be creative each day, and is hosting live streams to maintain that connection with the fans. It’s been a good temporary solution, but she’s eager to return to normalcy.

“Humans NEED to be around each other, it’s just the truth. We really do. I think we’re healthier mentally because of it. [Live streaming] has been a great supplement and I’m grateful we’ve had that opportunity and it’s not 1918, but I’m looking forward to the real thing again.”

Unintentionally, but perhaps fittingly, companionship is key to Old Flowers. Whether it be longing for a familiar person that’s no longer in your life, or just connecting with empathetic listeners, it’s a record that reminds us of the power of human interaction.

“I always hope that fans feel seen in some way, and learn something new about themselves. I hope [this record] makes people feel less alone.”

You cut some flowers that are beautiful and new and you put them in a vase. You water them and they last for this beautiful, brief moment in time for as long as you care for them. Then one day, by nature, they just sort of wilt.

Old Flowers has a lot of sadness and loneliness behind it, but with sadness comes acceptance. For Courtney, writing these songs provided space to process and reflect on a love that consumed so much of her adult life. Love, like most things, can be fragile, and Courtney recognises that better than most. She’s triumphed through this harrowing journey of self-discovery, surviving to tell the tale.

“You cut some flowers that are beautiful and new and you put them in a vase. You water them and they last for this beautiful, brief moment in time for as long as you care for them. Then one day, by nature, they just sort of wilt. They’re so pretty, but they’re gone and you can‘t get them back. That’s sort of how I feel about love.”