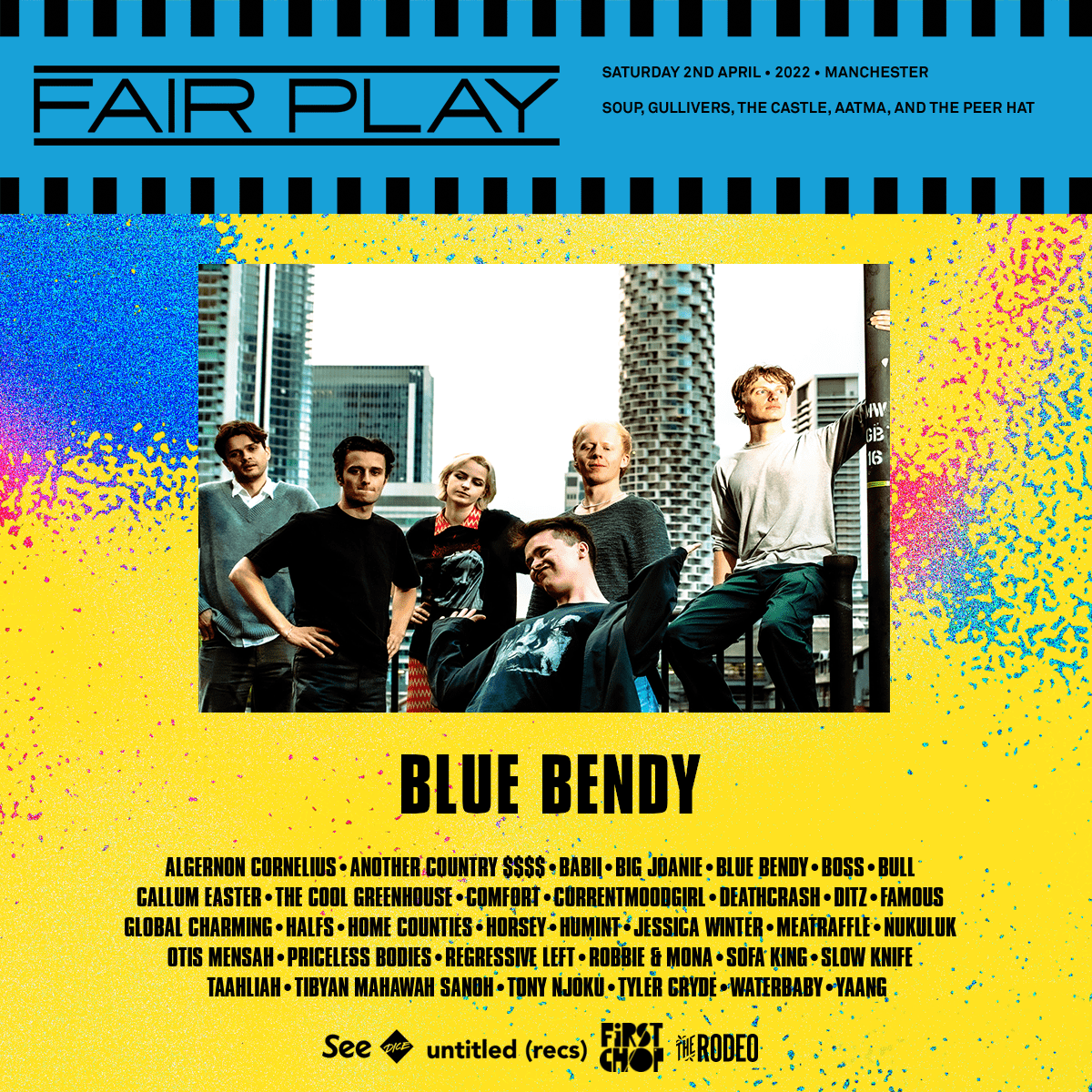 Having used lockdown as an opportunity to write, record, and reassess their direction, Blue Bendy emerged from the chrysalis of covid a somewhat different beast. Embracing a poppier sound and cleaner production, their recently released debut EP Motorbike neatly affirms that Bendy aren’t at risk of being subsumed into the current slew of post-punk bands any time soon; instead, they are carving out a niche entirely their own.

Ahead of their jaunt up North for Manchester’s Fair Play Festival, The Rodeo caught up with guitarist Joe Nash to talk experimentation, collaboration, and the international reach of the Big Smoke’s southside.

So, I suppose a good starting point for the uninitiated would be your band name – why Blue Bendy?

It gets some strange looks and some raised eyebrows from people, but we just wanted something that would catch someone’s ear, something that meant you weren’t ever going to get us confused with somebody else on a gig poster or when trying to search for us online. Not too much thought went into it though – when we started, I don’t think we really had any grand designs of how far we were going to try and take it.

Blue Bendy proper formed in late 2019 – would you say that since that point, you’ve evolved as a band? Or have you always had this quite definitive idea for what you wanted to do with the project?

No, not at all – I mean, I’d say that we’re still on that path now. The other day, for example, we were playing a song and it started having a completely different direction, sort of taking in new genres and new sounds. We’re miles different from where we started with our first single; there are different mentalities of how seriously we’re taking ourselves, and how seriously we’re taking the music. We’re moving from this… almost wannabe, straight laced post-punk band to now, where it’s a bit more fun, a bit more easygoing. I think that reflects on the EP, which is a lot of strangeness and a lot of quirkiness – that’s been a bit more of a recent thing. Yeah, when we first started, it was a bit more down the line.

It’s interesting you mentioned the post-punk sort of trope – something I wanted to touch on was the whole scene around Brixton/The Windmill, and the explosion that’s had in recent years. Being a South London band, have you found it difficult in any way being in the midst of that really highly saturated market?

When we first started, it was just at the back of when that last group of South London bands had really just blown up. So it’s a bit of a blessing and a curse, where half the people we were working with wanted us to mention it and half of them didn’t – you didn’t want to come across as if you were just trying to attach yourself to something, or to pigeonhole yourself in with a sound that was very popular at that time. So for us, we’ve always been more South East London. We used to play a lot in a pub called The Five Bells, which had its heyday for like two years when we were first going. Now it’s sadly turned back into a sports pub – they’ve replaced the stage with a booth with a big TV in it, which is a shame.

But between there and The Windmill and a lot of other South London venues, you meet so many musicians, which is great. I think people aren’t keen to describe it as so much of a ‘scene’ just because there isn’t a definitive sound, especially when you see the differences between everyone who’s come up successfully through it; it’s not like one band sounds very similar to the next. I think that mixing pot element is the most positive thing; seeing some really great bands on your doorstep and playing in all the same pubs certainly makes you think about your own music a lot more, makes you challenge yourself to push it a bit further.

Do you think it’s that sense of collaboration and bouncing off each other which has really caught the public imagination with regards to that corner of the capital?

Yeah, it seems so. There seems to be a big market for that sort of thing all around the world too. I know it’s quite closely followed in the States; at SXSW, they’ll be putting on an almost South London curated stage. And there’s a big market for it in Japan, where they all follow it really closely and talk about it on Twitter. I think it’s definitely something people have invested in, but it maybe doesn’t feel quite as full on when you start off living down here and you’re in amongst it. I guess if people are from different cities or from around the world, it probably seems like it’s this tiny little area with a couple of venues where there’s just always something happening.

To zoom back in on Blue Bendy specifically, I’ve read your work with producer Margo Broom [Fat White Family, Goat Girl] has been quite influential on the development of your sound. What was it about her in particular that you gelled with as collaborators?

For a long time, we were a little bit more… not quite directionless, but maybe without a lot of discipline. We were bouncing in between really expensive practice rooms and didn’t really have any relationships with producers or engineers. Our manager at the time passed our record on to Margo, and she essentially went ‘This sounds great, but the current recording isn’t doing it any justice. Get them in. I want to have a chat with – let’s re-record this thing.’ We were about ready to put it out at this point and she was like ‘That sounds shit, I’ll do a much better job with that’, essentially.

And we didn’t actually take her up on that offer. We put the single out, but then we started practicing, met her for a chat and we all got on really well. She really got us into shape, I guess, for writing with production in mind. Because with six of you, it’s really easy to think ‘What’s going to sound great live if we’re all just playing these mad parts really fucking loudly?’ There was a process of removing things, relearning, and thinking about playing and writing for production – before, we’d never really had a permanent space and the guidance to lock us in into that mentality.

Having had that period of reassessment during the pandemic, was it a strange transition to then return to live performance and showcase your new material on stage?

It was, yeah. We’d started going in our current direction a bit more over lockdown with some slightly more accessible tunes – well, slightly more pop orientated, I guess. Initially we were able to play them at those sit-down, respite gigs in between lockdowns, which were much more focused on one or two bands. I think all of us really enjoyed them – it was nice to play those songs and really work them out live to a crowd that was a bit more captive. It’s a lot harder to stand up and leave when you’re at a seated gig!

What’s the writing dynamic like as a six-piece? Would you say you have quite similar tastes, or do you have different influences you bring to the table?

We all certainly have a crossover on the big Venn diagram of alternative art-rock, alt-pop and stuff like that. We all love a lot of current bands like Black Country New Road, Caroline, black midi and stuff like that. And then a lot of nineties stuff – Stereolab, Broadcast, Pavement and Radiohead are all big ones for us. But then I think individually we all do bring in these other elements; Olivia might not listen to something that Harrison listens to, for example, but between the two of them they’ll gel this part together.

That’s something that you can hear on the EP – you’ve got strings on there, flute, and instrumentally it’s a bit more expansive and textural than your standard guitar, bass, and drums.

Yeah, for sure – I think that follows on from the change I mentioned when things became a bit more fun and loose, a bit more free. When we first started, we certainly wouldn’t have thought about putting strings and flutes on post-punk songs. But if something can be beautiful and you have the ability to do it, if you can write the parts and you have the players and people are willing to put their time in… Not only will it sound different, it will just elevate the whole thing. One of the EP songs, ‘Spring 100’, has a flute line that goes through both choruses, which before was just a guitar line. We thought ‘why don’t we try that on the flute?’ and when we recorded it, it sounded miles better.

You’re playing Manchester’s Fair Play Festival in early April – in your experience, does the atmosphere of shows differ from city to city?

We’re actually battling on to try and avoid what could be described as a bit more of a lukewarm reception in Manchester. It’s a funny one, because the gigs are always busy and the people there are into it, and it’s really nice for people to be coming down on a rainy Wednesday afternoon or whatever… but it certainly is a different feeling. I don’t know – maybe it’s more of a hometown thing when we play in London. We always really enjoy playing, but we’re still waiting to really nail our Manchester show. So hopefully Fair Play Fest will be the one, because I don’t think any of us think that we’ve really won over the city yet.

And now the EP’s out, is it a case of gearing up for festival season?

Yeah, definitely! We’ve been playing some really good gigs recently – we did the EP release show with Bad Vibrations at Peckham Audio, which is a brilliant venue. Then we did the [The Rodeo] Instagram takeover when we were playing in Newcastle and you know, I can only apologise about that. I think that was off the back of three or so days of gigging, and it was a long old drive up to Newcastle with not much sleep. So there was a bit of delirium going on, but we made sure we stopped by the Angel of the North to get some Northeast content!

We also have a new bass player – Sam, our bassist, had his last gig when we played at Dark Arts Festival in Leeds. So at the moment it’s a stellar mix of lots of practicing, continuing to write, and then festivals pretty much all through the summer – I’m really excited.