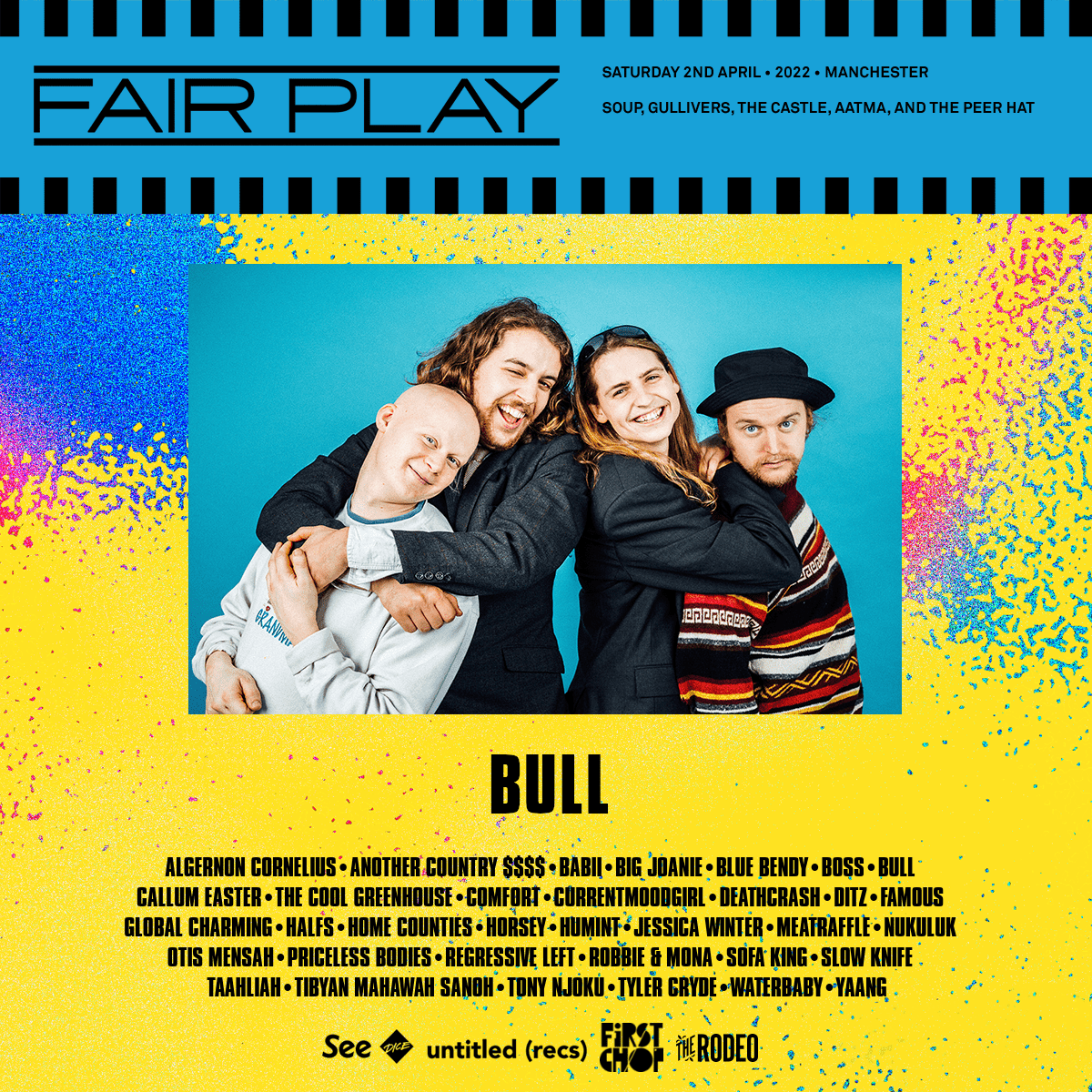 Formed in 2011, North Yorkshire band, Bull, have been blessing our playlists for over a decade and they show no signs of stopping anytime soon. Signed by EMI Records in 2020, the four-piece are the first York band to sign to a major record label since Shed Seven.

I had the pleasure of speaking to Tom Beer of Bull who takes time to speak to us about life since lockdown, their plans for 2022 and how post punk has finally rubbed off on him.

It’s no secret it’s been a turbulent few years for the music industry, but, didn’t you work on your debut album Discover Effortless Living over lockdown?

We actually finished recording the day before lockdown hit the Netherlands, before it hit the UK. It was mental, everything shut in the Netherlands and we jumped in the van and drove back – we had to leg it back to the UK before they went into one!

We got a lot of work done over the period that didn’t involve playing live, like the mixing and the videos. We actually do zoom meetings now you know, at least once a week!

As a band are you all dotted about then?

I was actually born in London but we were all raised in York, it’s a great city: Born in London, made in York. My sister, Holly, who joined last year – actually lives in Glasgow with Dan, who’s on guitar.

York is a small place, but it’s great as there is a strong community and everyone knows everyone. Which is great for music as everyone is friends and everyone is supportive, it was a great atmosphere to build becoming a musician.

My parents were actually in a band, they met playing music. That definitely was a massive influence for us growing up.

Your sister has only just joined the band – what led to introducing a family member?

Well, I’ve known her my whole life – obviously! She’s just a really natural musician, she’s a great singer and picks things up really fast. She’s a real artist, a visual artist. Holly is really funny as well, and just nice to be around.

Bull have been a band for over a decade now, how would you say your music has evolved?

A few original members left the band, which obviously changed the dynamic. We originally played really fast and upbeat, then we played around with harmonies and a softer sound.

Now, we are trying to be as diverse as possible. We want to do as many different kinds of things as we can, because, well you know, what’s the point in just doing one thing, right?

With the switch up of band members and the shift in sounds over the last ten years, at any point did you not consider forming a new band – why the Loyalty to ‘Bull’?

I must have considered it at the time when Lewis left the band. But, me and Dan were always in it and we just kind of didn’t want to stop – we wanted to tour the world so we just kept going, kept aiming to get bigger and to get the music out there.

You went out there, toured and you got your music out there. What’s been the highlight so far?

Well, we went to America. That was probably the best thing we’ve done.

How would you describe the differences between the UK & US?

Everything was massive! The trees are massive. Everything’s bigger. Like everything, the sky is bigger!

It was more politically radical than what I expected, there’s just like lots of punks and like lots of like, far out people that are really cool. I honestly did get a sense of that freedom thing that people talk about – like if you wanted to build a house, you could.

You’re on tour soon with Feet – what can we expect from the tour?

A good time! A fun, safe environment to party! Feet are just really nice guys and a really great band –  they’re the Ramones of the 21st century.

Why is it so important to create safe spaces in the music industry?

Everyone deserves to be safe and to have a good time. Especially in music – it’s a great atmosphere for people to be themselves in and everyone comes together to watch music and have a good time.

You’re on the line-up for Fairplay Festival in Manchester in April, Fairplay’s aim is to create a fair playing field, an equal opportunity for all – are you excited to be a part of the day?

Who will you be watching at Fairplay?

I’d [also] like to see Big Joanie! Estella (plays bass in Big Joanie) used to live in York and we’re best mates, when Bull were starting we played with her band. So it’s always great to see her as she lives in London now!

Global Charming as well, they’re a really great Dutch band from Amsterdam. It’s such a great line up!

We just recorded a new EP which will be out in the early summer, and a new single which will be coming out soon – it’s going to be called… Actually I shouldn’t say that because we change our minds so much!

Then we have also written another album which we are going to finish recording in Amsterdam this month – so that will be 16 songs that we have recorded. But it’s good, its very varied.

What can we expect from the new music?

Well post punk has finally rubbed off on me! It’s a bit diva-esque, like Grace Jones, some of it’s very synthesizer heavy, like dream pop – it’s going to be really varied! It’s going to take you on a journey.

Oh, and we might be doing a video with Neil Buchanan – of Art Attack –  we wrote a song that we named after him a long time ago, not because it was about him but just because we used to call our songs different things. The art created in the video will then be the artwork for the single – because we’re wacky like that.

You can catch Bull at Fair Play Festival in Manchester on the 2nd of April. Tickets are available HERE.