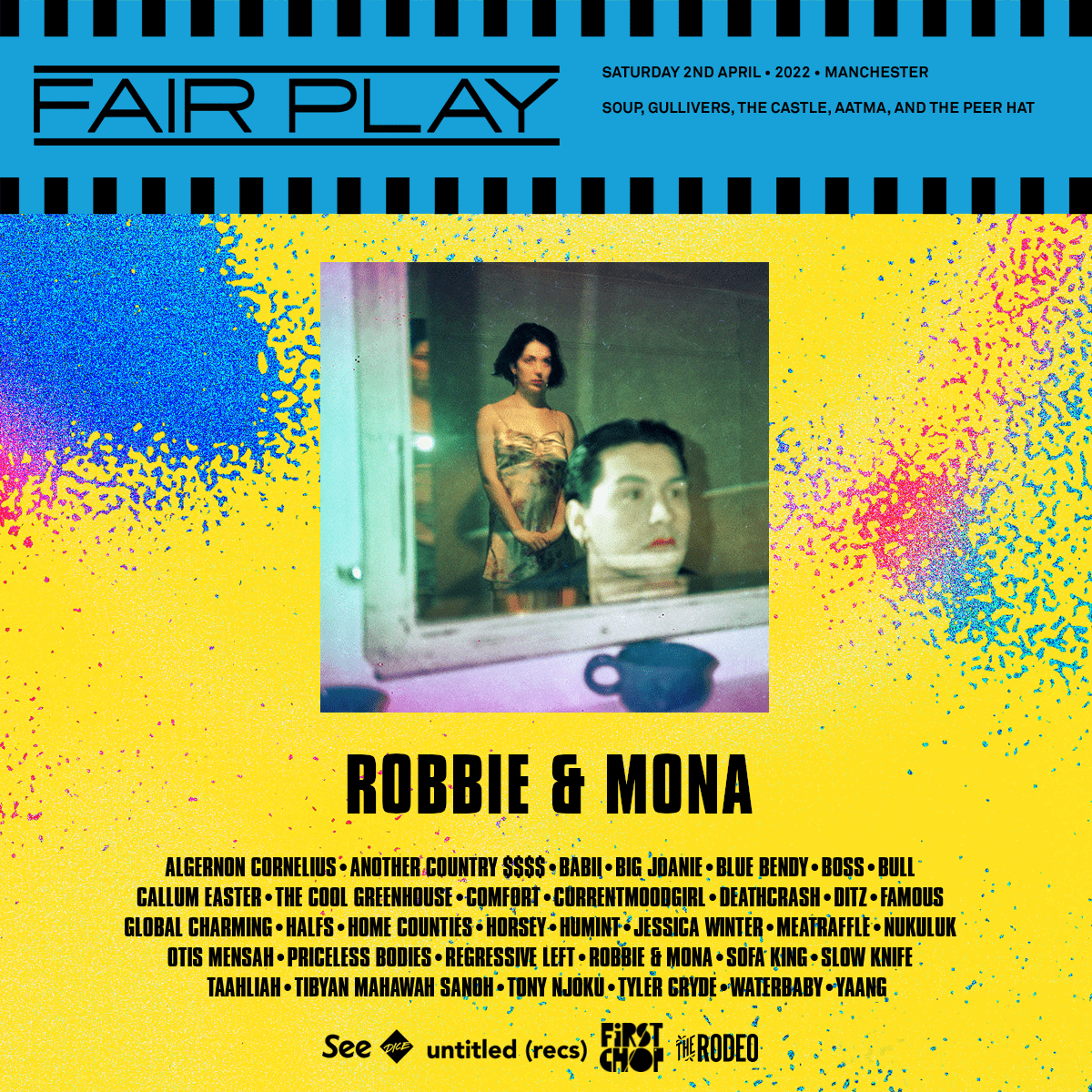 Robbie & Mona: Music’s Very Own Lady & the Tramp (their words not ours)

If this surrealist glitch-pop duo’s debut EW didn’t pop up on your radar in 2021, first of all how? and secondly, Robbie & Mona is a name you’re gonna wanna get to know pretty sharpish.

So, already, you know you’re in for something deliciously weird, and wickedly surreal.

Following a gloriously sunny day of working/hanging in Greenwich Park, Robbie (Will Carkreet) and Mona (Ellie Gray), kindly spared an evening to chat to us. Read on.

For anyone new to Robbie & Mona, what can you tell us about yourselves as a duo?

M: I would say that we are kind of introverted; we’re like the colours red and blue. And when I say the colours, red and blue, I mean in a sort of misty, dark, sultry way.

I read that your stage name comes from your pet dogs, right? But I wondered if you could tell us a bit more about Robbie & Mona as characters, or personas, perhaps?

M: Yeah, it was quite a spontaneous, aloof kind of naming for us. Robbie, I think, is a slightly neurotic kind of high frequency, alter ego. Whereas Mona is the docile kind of one, but also expressive one – in an oxymoronic way! But it’s not a conscious effort to be these alter egos. We aren’t necessarily like these people when we’re just living our lives, but when we’re on stage performing, those aspects come out.

R: They were definitely characters we stepped into, wasn’t it? And it was convenient that those personalities had relevance to the dogs as well, that they were also like that. It was a nice little bow around it, you know?

I struggle onstage to not have a persona. Every project I’ve been in has always had an element of a persona when going on stage. I really struggle with the concept of being on stage and being something that people are watching and experiencing, and then coming off stage and having to revert back to something where you’re just part of a crowd watching and seeing everything.

You both met by being part of Pet Shimmers. What is it that Robbie & Mona allows you to explore that you weren’t able to, or maybe hadn’t done, with Pet shimmers?

Not only are you a musical duo, but romantically too you’re also a couple. How does that dynamic shape your music?

R: In a really shallow way it is really convenient for us. We’re together, not just creatively, but also in the way we live our lives. It just rolls into the same weird little world of our relationship, but also Robbie & Mona. Creatively, we’re always reinforcing each other and our respective outlooks on the world, the conversations we have, and that’s always been channelled into not only our relationship, but our music at the same time.

M: Yeah, I think I feel like for me, personally, it just makes a lot more sense. It’s not separate, it’s not decompartmentalised. It feels woven together and authentic because it’s real, and happening in real time.

Was it always the intention for this project to be something you shared publicly? Or, did that come with time?

R: It was always meant to be a thing to shout about. It was always fun. From the first seconds of making music together we were like “Oh fuck, this should be fun. Everyone should hear about this.” It felt like we were making it for a very, very loud reason.

M: Obviously, there was a drawing together anyway [gesturing towards themselves]. But it also felt like there was an intuitive curiosity that there would be something really good musically, and creatively there. It felt like it should be like on a stage.

M: That’s cool, because I remember Oli (lead singer of Pet Shimmers) saying something similar, and I don’t think we set out to do it specifically.

M: We’ve been writing a new album, and I was listening to the masters the other day and really heard it in a different way. I suddenly heard the lyrics that I’d been writing altogether, and realised that myself as well. It was like “Oh, my God, there’s always little bits of things about that here, there and everywhere.” And I really don’t consciously think that it is being erotic that. But yeah, it obviously is there and it’s coming out. Also because we are in a relationship, it is a safe space, I hate that word, that term, but we’re able to express that part of ourselves because it’s in the warmth of a relationship.

It becomes something that you have control over; you decide how it’s seen, and who sees it. There’s a lot of power in doing that. So… you’ve recorded your second album. What can you tell us about that, as you’ve begun to hint a little already.

M: It’s finished, we’re really excited about it. It feels like the album that we wanted to make when we first met. So, we made EW, and that was what it was, but it’s like we’ve sort of made what we originally felt like we were originally trying to do. Not that it’s like I guess it’s quite different.

R: I really wanted to make a better sounding album, sonically, than we first did. I was always wanted there to be more instrumentation, for it to be a lot more cinematic, and explore sides that we haven’t done yet. When we were writing it during lockdown, we were listening to a lot of music that we’re maybe using as escapism, so that then found its way into the new album. In a songwriting sense, I was playing a lot more piano at home, so naturally it has kind of progressed into a more slightly organic album than the first one. There’s still a load of horrible electronic nonsense in there, but now there’s also the nice, beautiful, sparse bits that we’ve always tried to do.

M: So when we first met, we were watching a lot of like Blue Velvet, David Lynch and stuff like that. I kind of feel like, without it being really obviously, the album feels like it’s got a bit more of that flavour to it.

You obviously recognised the potential for that early on, but you have to go through the process of doing the first album and, I guess, growing as people, growing together to be able to get to the next stage.

R: Yeah, it definitely felt like the first album was just a practice run for making this album.

You’re strongly influenced by film – who would play Robbie & Mona in your biopic?

Besides film, are there any literary influences that come into your work?

M: I’ve been really, really obsessed with someone called Clarice Lispector, and her book Agua Viva, which ‘Living Water’ translated. It’s just so good. It’s kind of fiction, but it’s kind of just one long stream of consciousness which you could start in the middle, at the end, or the beginning. It’s really beautiful as well. It talks about things like flowers and perfume, but not in a twee, icky way. It talks about it in this really almost philosophical way. So I think she’s always in the background of my inspiration, in a lyrical way anyway.

That style of writing, and a focus on character, calls to mind people like Nick Cave. Do you always like the characters you’re writing either from the perspective of or about, or are they sometimes people that you dislike?

M: Good point. Yeah, they’re definitely not always people that I like. There’s definitely some grotesque characters. It’s almost like a way of just writing a feeling that you’re having yourself and clonking it on someone else.

When you are writing, do you have a particular process that you go through or an approach to writing?

M: So I’ve just started a Masters in Art Theory, and I’m doing a module about writing as a sort of art thing. I’m trying to bring together this idea of somatic writing, which is, I kind of think that automatic writing in surrealism, which is a precursor to that. I feel like somatic writing for me involves not being too in your head, not being too analytical, just being in your body. I guess it’s quite lucid, and sort of being awake, but slightly dreaming at the same time. Just watching what comes into your mind’s eye and writing it down, rather than sitting down and writing a plan and a method and a narrative. Obviously, a lot of the time that can just be crap, but other times it can be good. If you do it regularly, and you sort of show up for what’s going to arrive, then that’s the good practice, I think.

Who would you recommend audiences also get along to see at Fair Play Festival next month? Anyone you’re particularly looking forward to?

R: Nukuluk are like our favourite thing at the moment to be coming out of London. There’s also deathcrash, are one of the most amazing live bands ever. Tyler Cryde, Regressive Left I think would be great.