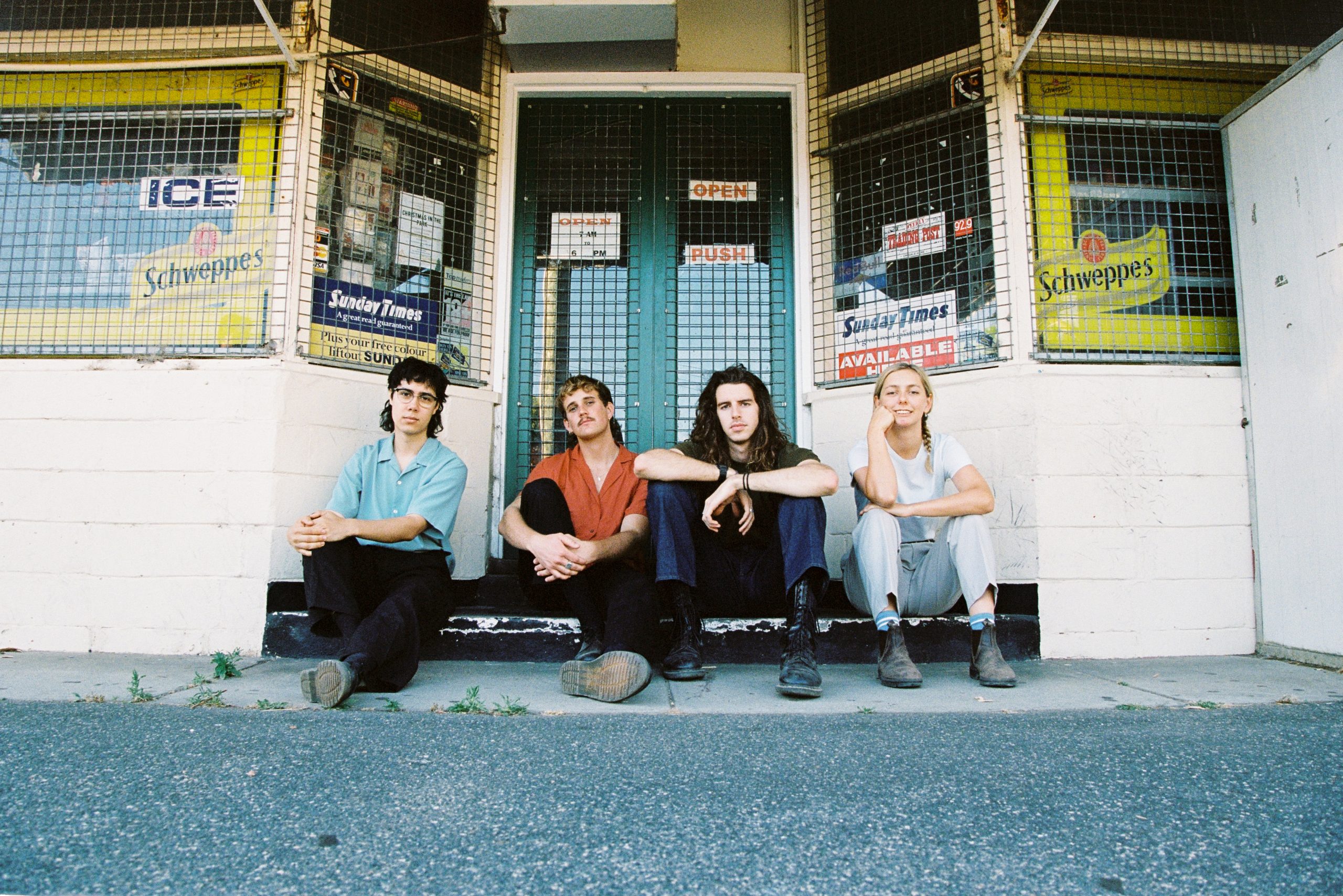 Spacey Jane on Here Comes Everybody

Spacey Jane’s success began behind in June 2020 with the release of their debut album, Sunlight. A somewhat ironically titled album, considering that it was released when many were dealing with lockdowns and other pandemic measures, the album provided some much-needed jubilation. Capturing the collective consciousness with their introspective, yet wholly optimistic lyrics, the four-piece have enjoyed universal acclaim since the release of this project.

For the release of their follow up album, Here Comes Everybody, we caught up with lead vocalist and guitarist Caleb Harper, for a track-by-track breakdown of the LP. Though two years have passed since Spacey Jane’s debut album was released, Harper taps into this seminal time and the years that preceded the pandemic with songs that are moving, funny and deeply personal.

I wrote this about the way I was feeling and behaving when I was in my final semester of college before dropping out.  I left quite unceremoniously by not showing up to any of my final exams or handing in final assessments.  I had no idea who I was, I was seriously depressed and completely spinning out.  I felt like I’d created this terrible facade of myself for all of these people that I knew and that really I hadn’t been myself around someone or been truthful about my feelings in years.  I didn’t care about my life or what I was doing to my body, I thought I was going to end up dead if I didn’t fix something.  I felt like I was the one going through those feelings and even though that wasn’t true, it made me feel so alone.

Wrote this song while experiencing severe hangover anxiety and feeling extremely hopeless.  It’s fun to juxtapose fast upbeat instrumentation with somber lyrics and themes.  I’m trying to explain how I feel like I’m just going through the motions with love, career, friends and family.  I felt like everything was just happening because it had to and not because I cared about it.

This is song is about a version/part of myself that I don’t want to know or see but I have to admit still exists.  The verses are a nightmarish vision of a couple driving together, having lunch etc. kind of a Natural Born Killers vibe.  It’s the version of me how I think I am in a relationship.  The chorus is sort of self explanatory, as it’s the worst that I think of myself.  There isn’t a resolution of a redemption lyrically. It just sort of fades out.  The plea “You must think something of him” is a hint to the fact that maybe I don’t completely hate that other person, and that I also have to learn to love an accept the all of myself before I can make positive changes to the parts I don’t like.

I think this one is pretty self explanatory!  There are so many things you try to do to wrestle with a breakup and other grief/sadness and it’s usually never the right things.  I tried to capture how empty you feel in these moments, how can seem to take away the sadness and guilt of what you’re feeling.

I wrote this song about how I was feeling like my life was a bit like one of those nightmares where you’re at school with no pants except I used the metaphor of being on set and forgetting all of your lines (because it felt less silly).  I guess it’s about anxiety but also just having no idea what I’m doing even though I want it to look like I really do.

It’s Been a Long Day

This song was written pre and post breakup in 2020.  It was a way to tell someone that I loved them when I was feeling so anxious and down during covid that I didn’t know if I was doing enough to really tell them.  In the end I became so overwhelmed and unwell during a 6 month period, that I convinced myself that music was a lost cause. The complete loss of identity that came from this feeling resulted in the breakdown of that relationship.  “I’ve got something to say” was trying to say all the things I felt for her at once.  In the end, after the breakup, the final lines of the song are “I really loved you”.

With this song I was trying to capture my own/the widely shared experience that people have when they leave high school.  I think there is so much pressure to be sure of yourself and focussed and committed to a future in a world that really can’t give you any of that in return.  It took me so long to develop any sense of direction or identity post highschool, sometimes I think I’m still figuring it out.  You shouldn’t have to pretend that you’re in control or have it figured out when you’re 18.  Anyone who says otherwise can get fucked.

Not What You Paid For

I tried to recreate a night or weekend that my friends and I might have had when we were 18 or 19.  It’s about recklessness disguised in being free and hidden behind bravado.  I think so much of the behaviour in that time of our lives is so destructive but given a free pass because of our youth. I wanted to talk about that.

I think this one is also pretty straightforward.  It’s about trying to make superficial changes to myself in the hope that the new sheen of it will outshine the dullness I’m feeling about being alone and having failed another relationship.

I wrote this song about leaving home when I was 17.  About feeling like everything I was leaving behind, physically, was also being left behind emotionally.  It’s hard to go more into detail here but it’s about fractured and complex relationships with family.

“Tell my friends how I’m feeling” is a simple line I’ve been thinking about a lot lately.  It’s an easy way to summarise what I think most young people miss with mental health.  There are so many avenues to deal with mental illness and support is opening up more and more for people but often the biggest barrier to dealing with things is letting the people who are closest to you know what you’re experiencing.  Therapy helps so much from the inside but feeling like I’m understood and loved in my environment has probably been the biggest victory for me.  The chorus of this song sits afloat of the rest of the lyrics, I was feeling heartbroken about a relationship and the mood of the song fit the feeling at the time so I just went with it.

This song is for a friend who lost a loved one.  I didn’t really know what to say at the time except for “I’m sorry and I hope you’re ok” so putting it in a song made it easier.  I find it hard to not feel cheesy or tokenistic when you’re trying to support someone through grief and songwriting gives you a license to say thing exactly how you want to.