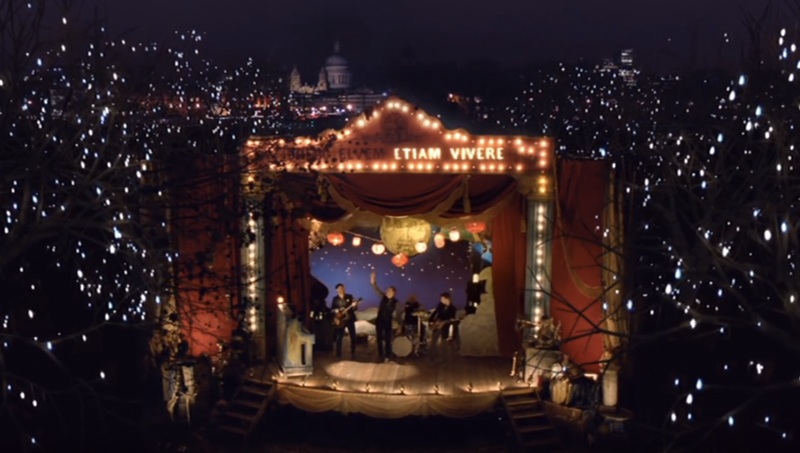 The 12 Days of Christmas (Songs)

In my house, it doesn’t take long for Christmas to take over. The day after Thanksgiving, the tree goes up, the lights kick on and the Christmas records make their way to the display stands. But if you’re anything like me, you have a love/hate relationship with Christmas music. Sure, it’s festive and reliable and helps get you in the mood for the holiday. But, there’s only so many times you can hear Mariah belting her modern classic before you want to shut it all down. That’s probably a Christmas sin, but hey, I never claimed I wasn’t blasphemous.

The thing is, there’s not an original Christmas song released in the last 30 years that’s come close to achieving the longevity that ‘All I Want For Christmas Is You’ has. It’s secured a spot amongst the classics from crooners like Bing Crosby and Burl Ives, and rightfully so: it’s stupidly well-written. Of course, The Rodeo is nothing if not unconventional. And so we’ve put together a list of 12 modern originals that deserve a spot in your Christmas playlist. Sure, none of these are going to be certified 12x Platinum or top any charts. But they’re criminally underrated, much like the pair of fuzzy socks you’re inevitably going to open come Christmas morning. Ain’t no shame in keeping your feet warm. Now, without further ado, here’s 12 Christmas songs from under the radar, one for each day of Christmas. (Still not quite sure how that works, but one of these days I’ll look it up…)

THE KILLERS (feat. DAWES) – ‘CHRISTMAS IN LA’ (2013)
The Killers have released quite a few Christmas songs in their time – some have been ridiculous, some have been down right awful, and a couple have been diamonds in the rough. ‘Christmas in LA’, their collaboration with Dawes, is the outlier here, in that it is so much better than the rest, it’s hard to even categorise them together. With perfectly orchestrated harmonies, stripped down instrumentation and lyrics that remind you not everyone has the potential of getting a white Christmas, it’s a shame this hasn’t caught on more by now.

THE STAVES – ‘HOME ALONE, TOO’ (2018)
You could describe most of the songs on this list as beautiful, but for The Staves in particular, it’s the a particularly apt descriptor. Not everyone loves Christmas – maybe it brings up painful memories, for example. ‘Home Alone, Too’ is not only a great play on words, but a killer Christmas heartbreak anthem. It might not be the most uplifting thing you’ll hear all season, but you’ll surely be singing along by the end of it all.

SLEEPING AT LAST – ‘SNOW’ (2011)
If you’re looking for a gorgeous, gentle collection of Christmas classics, look no further than Sleeping At Last’s. ‘Snow’ is the first original song he released, and it’s a beaut, Clark. Another one that could’ve made the list had we expanded the criteria is their cover of ‘Christmas Is All Around Us’ from Love, Actually. Yeah, that song. It’s all pretty awesome.

MOLLY BURCH – ‘NEW YEAR LOVE’ (2019)
We chatted with Molly back in 2019 ahead of the release of her first Christmas album, which features her lovely takes on many Christmas classics as well as some well-placed rarities. Her original composition ‘New Year Love’ however, is a true standout, with her sultry voice carrying us through to the new year ahead.

SUFJAN STEVENS – ‘LONELY MAN OF WINTER’ (2018)
Sufjan is such an eclectic artist, but he’s (arguably) at his best behind gently picked acoustic instruments and multi-tracked harmonies. The story goes he recorded this for one lucky person as part of a Xmas Song Xchange Contest back in 2007. In 2018, it was finally available everywhere for the rest of us to hear. It’s a great song to play by the fireplace, if anyone’s got one of those.

BLINK 182 – ‘I WON’T BE HOME FOR CHRISTMAS’ (2001)
If you like your Christmas songs a little more ridiculous, obviously Blink 182 is going to deliver. It sounds like, well, Blink 182 circa Enema of the State. Are you really surprised? Some of the lyrics are a little dated but hey, it was the turn of the century. This is nostalgia at its finest.

INGRID MICHAELSON – ‘HAPPY, HAPPY CHRISTMAS’ (2018)
While this song isn’t quite as happy as the title would lead you to believe, Ingrid Michaelson penned quite a gem about conflicting feelings come holiday time. It’s part of one of the best modern Christmas records that’s out there, a pleasant surprise you may just want to pick up for your record collection. Fun fact: it comes with a lovely recipe for Ingrid’s homemade blondies.

THE LINDA LINDAS – ‘GROOVY XMAS’ (2022)
That’s right, bands are still releasing Christmas bangers in 2022. Young up-and-comers The Linda Lindas not only rock around the Xmas tree with ‘Groovy Xmas’, but around the whole damn living room with a feel-good song that just reminds you of being young. Ain’t nothin’ better than that, this time of year.

FRIGHTENED RABBIT – ‘IT’S CHRISTMAS SO WE’LL STOP’ (2007)
The late, great Scott Hutchison always had a way with sneaking in subtle rosey-coloured optimism in the midst of beautifully depressing song lyrics. ‘It’s Christmas So We’ll Stop’ is about setting aside petty differences, if just for a day. After all, ‘we’ve all got blood’.

RELIENT K – ‘BOXING DAY’ (2007)
If you couldn’t tell, I love a good, sad Christmas song. And what’s sadder than the day after Christmas? Christian pop-punkers slow things down for a song that perfectly encapsulates the post-holiday depression, all while vowing to make the following year a positive one.

COLDPLAY – ‘CHRISTMAS LIGHTS’ (2010)
Love ’em or hate ’em – or I suppose you could be somewhere in between, too – there’s no denying that ‘Christmas Lights’ is one of the best Christmas originals any “big” band has released A.M. (think about it). When Coldplay released it all those years ago, I was immediately enamored, and it’s had a spot in my Christmas playlist ever since. This breathtaking song reminds me vividly of a light, evening snowfall. ‘When you’re still waiting for the snow to fall, it doesn’t really feel like Christmas at all…’

STARS – ‘CHRISTMAS ANYWAY’ (2022)
Released just last month, Canadian indie-rockers Stars sing of having Christmas even when you might not be in the mood for it. Ultimately, just as in the song, you’re glad you did. And not for nothing, but ‘No Christian charity will make you love me…’ is a grand lyric – I told ya I love a good, sad Christmas song, eh?

On behalf of The Rodeo, we hope you have a very Happy Holidays. Can’t wait to see you all in the new year.