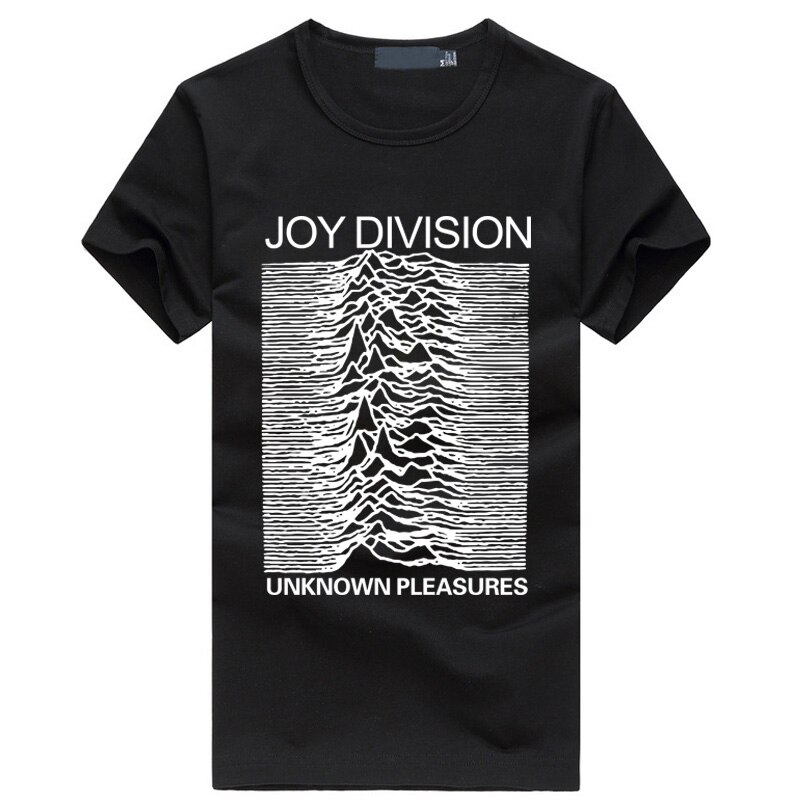 What if the ‘Unknown Pleasures’ T-shirt never existed?

There’s one piece of clothing that symbolises a ‘moment’ for Generation Z. You’re 16 again and GCSEs are doing your heard in. The acne has well and truly set in. Everyone and everything annoys you. Your walk to school, the trek to get your lunch at break time, that kid who keeps following you around trying to be your friend because you talked to him once in class. Everything just gets on your nerves.

By now you’ve cottoned onto the the ‘black is cool’ trend. Your mates down the park, however, have committed to growing facial hair. And, though there are differing degrees of success, they look like a group of shit Salvador Dalis. None pull it off.

The week ahead is the last week before you break up for summer. A non-uniform day will mark the end your hardest time at school yet.

Though it seems trivial now, at the time a non-uniform day was a chance to show off—it was something you remember genuinely looking forward to. Early on it was about donning your football shirt and Astroturf trainers to boss the football field at break time, but now it’s something else. Now it’s goodbye to those friction burnt trousers and chewed jumper sleeves. And hello to being yourself.

The morning of non-uniform always comes around quick. “Have you washed it, mum? I can’t find it!?” you’d shout down the stairs. “Have you tried the washing pile,” she’d shout back. There was only ever one choice. The t-shirt that summed up your whole personality, symbolised who you are—a moody teenager. Your ‘Uknown Pleasures’ t-shirt.

Whether you actually knew who or what Joy Division were didn’t matter. That tee represented more than just a band. But what if it never existed? What if that person in your year with the cheekbones and hair never bought one and started the trend? What if you were still ‘bum fluff facial hair’ or whatever stupid nickname you had?

For many Joy Division represent a ‘moment’ in their life. You swore to yourself that you’re not into it, you listen to ‘happy’ music so why would it? But then one day it just clicks. It always clicks. That moment when something goes from noise to music in your ears would never have happened if that t-shirt never told you, subliminally or literally, who to listen to.

Joy Division is also a key divergent point in your development. When you reach the point of puberty, your face is full of puss and everything is annoying. Some find refuge in the charts, with quick and easy pop relief. Whilst others might go a bit deeper and listen to what their family is into — some country, a little folk or some Abba perhaps. But one group of people found Joy Division. These people matched their hormone-fueled anger with some more hormone-fueled catharsis.

Joy Division people go on to see the world differently to chart people or family-music people. They will go on to start a band, do an art degree or spray paint walls for a living. Their future, their personality and style will completely change.

If you never had exposure to that music at that point in your life, Joy Division, and the tee, could’ve passed you by. You could’ve been that 22-year-old wearing the ‘New York City’ print t-shirt from Topman right now.

If you fast forward for a minute to Gen Z’s impending adulthood, the music behind the t-shirt has become more and more important.

In recent years, Fountaine’s D.C., IDLES, Working Men’s Club, The Murder Capital, Ought—all of which are new bands in the last decade—have taken aspects of the lyrical and musical approach of Joy Division.

All of the artists in these bands, baring a few perhaps, were doing their GCSE’s in Britain five years ago. Coincidence? I wouldn’t say so. It’s obvious that each was inspired to some degree by what Joy Division were trying to do.

The Salford lads wanted to break down the cluttered and loud sound space of The Sex Pistols, producer Martin Hannett had the vision to create punk music that could breathe. To do that, the band reversed their roles. Peter Hook on bass took the melody. Bernard Sumner on guitar took the rhythm. Whilst Stephen Drum Machine Morris used spray cans and synth drums. And Ian, well Ian was completely new in his own right.

The result was something entirely new without any precedent for its creation. Without that tee, if people never found this, those bands above would never have found their musical guiding star. Fact.

Punk symbolized a total disassociation with ‘the system’ and ‘the people’ who run it. Post-punk was different, it built a person, an individual, and a world view.

Post-punk was punk’s edgy big brother, a complex mix of Avante Garde visual and performative art that equally painted the world around it shades of black and white, mixed with romantic visions of love and loss.

This ‘world-view’ was expressed through military-inspired minimalist and smart clothing. Ian Curtis especially, donned military surplus trench coats, shirts, trousers and so on. The colour scheme was black, white, grey, beige, moody colours. Everything was controlled. The trousers were straight. The shirt was tucked. And the music reflected the way the bands dressed.

Any of this sound familiar? Today, everything about post-punk dress is in. It’s all moody, all black and grey and beige, tucked in, rolled trousers, Doc Martens etc. And without the music coming back big, the current culture of vintage grandad clothing wouldn’t be the same. God forbid it might have even taken after the neon 80s trends.

The Unknown Pleasures t-shirt was what twitter might call an ‘aesthetic’. It was that black and moody chic look, that made you stand out on non-uniform day. It was a symbol of you growing up, turning your back on the football shirt days and saying hello to adulthood.

That little tee became an iconic piece of clothing for Generation Z. Urban Outfitters was basically built off the sale of it, and this started something much larger. It started a coming of age story, a maturation of musical tastes and a renaissance in post-punk’s motive and style. Without it, we would be listening and seeing a very different young generation today. Without it, we all may well still be that person who listened to chart-music and only got clothes at Christmas when their mum bought them for you. Thank god.

Listen to Joy Division on Spotify and Apple Music. Get our latest magazine HERE.