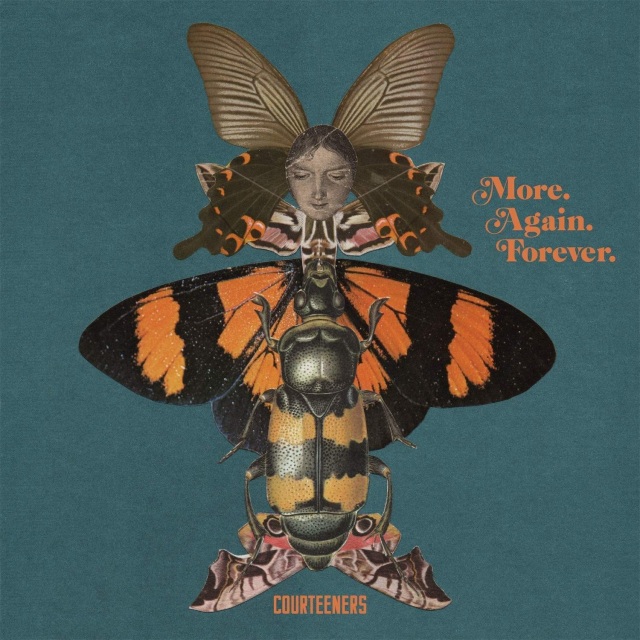 I feel like Courteeners are shrugged off and tossed into the indie waste by anyone other than exclusively parka-donning, Liam Gallagher preaching teenagers. I think that they’re a bit misrepresented; ‘belonging’ to the alternative landfill by many. They’re stuck in the middle of having a weirdly low media profile and taking the plunge into anything other than hardcore indieness.

However, More. Again. Forever. tips the scales into the latter, and deservedly so. It goes deeper than anything they’ve ever released before, ploughing deeper into the human psyche more than they ever have, and traversing through subject like pining over ex-lovers, and different perspectives of mental health. Heavy.

It begins with the meaty riffs of ‘Heart Attack’, with the in-your-face factor being provided by their clumpy lyrics and glam-rock guitar licks. There’s a revitalizing groove, which is clear through and through the record, and this track along with the subsequent ‘Heavy Jacket’ go hand in hand when it comes to experimenting with the newfound psychedelic factor of their sound. They’ve put these two tracks at the start of the album to sit you up, tall and straight; to tell you that there’s no joking about the fact that they’ve tested themselves and succeeded in it. Hearing these two tracks are the equivalent to the feeling a cup of cold water being lashed over your head in the morning, when you wouldn’t get up for school. Alarming(ly different), foreign, and it wakes you the fuck up!

Later, songs like ‘Take It on the Chin’ inject an ironic tone into the record. Centered around exploring beyond the tangible parts of life, it ventures towards attitudes on mental health, while tracks like ‘The Joy of Missing Out’ and One Day at a Time’ are seemingly thrown in for old time sake; being Characteristically Courteeners with its urgently indie, brutally honest nature. The ultimate track ‘Is Heaven Even Worth It?’ concludes the album in maturely melancholy way. It’s an overthinking-fueled reflection on having attempted to do everything in your power for a particular outcome but failing to achieve it. Again, a pretty deep cut, but if anything, it shows their transformation from religious indies, to an exploring glam-rock infused, psychedelia drenched band. And I’m here for it.

More. Courteeners. Again. Forever. Pls. Thnx. This is probably getting annoying now. Just give it a listen and witness their strangely surrealistic take on some deep ‘tings for yourself.

Haiku Review
Throw out your parkas,
Fray’s no longer one of those
Red-Stripe indie fucks.

Listen to Courteeners on Spotify and Apple Music, and for more Rodeo, grab out latest mag HERE