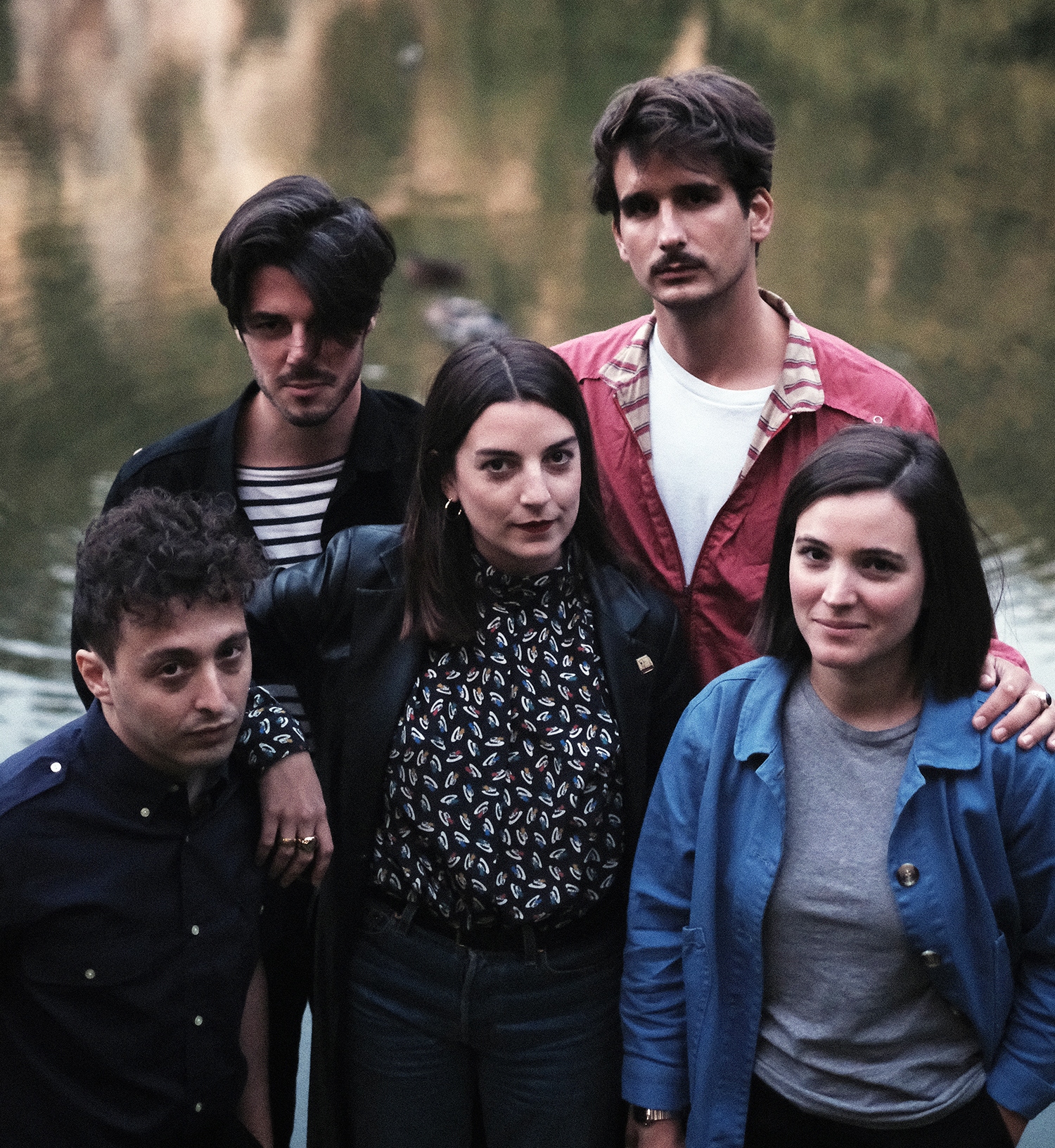 Paris is the city of music and love. It’s a magical place that’s home to the Mona Lisa, republicanism, the Eiffel tower and three miniature replicas of the Statue of Liberty. It is also a place that’s always had a love affair with music, however. Jim Morrison is buried there, and Serge Gainsbourg, Francoise Hardy, Jacques Dutronc and Johnny Hallyday – the French Elvis – were born there.

One of the latest bands to come out of Paris is En Attendant Ana, a quintet who are about to release their sophomore album, Juillet. The band write bright energetic indie-pop that falls somewhere between Cate Le Bon and The Strokes. It’s loud, proud, guitar-led and experimental.

“Oh! We all have a particular relationship to Paris,” Margaux, the frontwoman, tells me. “Paris is beautiful, there are so many things to do, all the time, everywhere. [But] it is also crowded [and] we don’t pay attention to one another.”

En Attendant know a different side to Paris. A side many of us would probably only ever see fleetingly as tourists. They have grown up there, performed there and lived there for their entire lives.

“Everything is expensive [and] there are huge social discrepancies from one neighbourhood to another, even from one street to another, rents are insane… We love Paris but sometimes we feel like the city doesn’t really love us back.”

Margaux describes a familiar feeling. A city is a vast, unimaginable space, and, as they say about places like New York, you have to be hardened to survive.

I remember getting a metro in Paris once and asking one of the burly, evil-looking people in the ticket booths for some help – in English of course, I’m not that cultured. In return, I was met with nothing but a blank look, a frown, a shrug and a nasal murmur. Sacre bleu!

Margaux and co usually hang around La Boule Noire, an intimate gig venue and bar clad wall-to-wall with 1970s paintings. It’s the sort of place you’d find the locals sipping on a Stella Artois twiddling their moustaches; maybe once in a blue moon Eric Cantona rocks up and performs an improvised stream of consciousness. You know the kind of place.

When I brought up Paris’ music scene, Margaux was quick to tell me that it’s struggling. As with the British independent scene, “venues are closing everywhere in France – not just Paris.”

We love Paris but sometimes we feel like the city doesn’t really love us back.

Independent venues are finding it hard to adapt to a changing demographic. Old venues are now in developed areas where noise complaints are numerous and customers tend to be persuaded by larger, O2 Academy-style venues.

“Whether it be venues for concerts or clubs, the [authorities] idea is always to protect the population from noise, from drugs, from anything,” Margaux tells me passionately. “But the truth is that alternative places are disappearing and so is the alternative culture that goes with it… I think the main thing to say is that [the scene] is in danger.”

By this point in our short conversation, it’s fairly clear what Margaux meant by: “we love Paris, but sometimes we feel like the city doesn’t really love us back.” The authorities have made it difficult for bands like En Attendant Ana to make a living out of their art for decades.

Despite the issues they face, however, En Attendant Ana continue to push forward. They are about to release their second album, Juillet, via American label Trouble In Mind.

Juillet is a record split into two clear halves. It opens with a vibrant and fast-paced beat and sound. Hurtling from ‘Down the Hill’ to ‘In/Out’ the band barely take a moment to breathe. From ‘From My Bruise To An Island’, a slower, more angelic track, the album becomes something decidedly more atmospheric and intimate.

The main message would be you are not alone.

The cover artwork for the record brings the inside out, recreating a deconstructed living room in a field. After offering my best possible interpretation of the image, thinking it was a comment on global warming, Margaux expanded on its meaning: “We didn’t even think about that for the cover! We are super concerned about ecological issues, ‘When It Burns’ is about that,” [but] the idea was actually to create a safe zone, like a fort. A place in which we could hide — something like that.”

Margaux “[tends] to consider [the album] as a journey towards the acceptation of losses (would they be friends, lovers or dreams through death, departure or disillusion…) but also towards self-respect and independence.” Her poetic lyrics “relate to the different phases you can experience during these kinds of transitions. [But] the main message would be you are not alone.”

Listen to En Attendant Ana on Spotify and Apple Music. Get our latest magazine HERE.