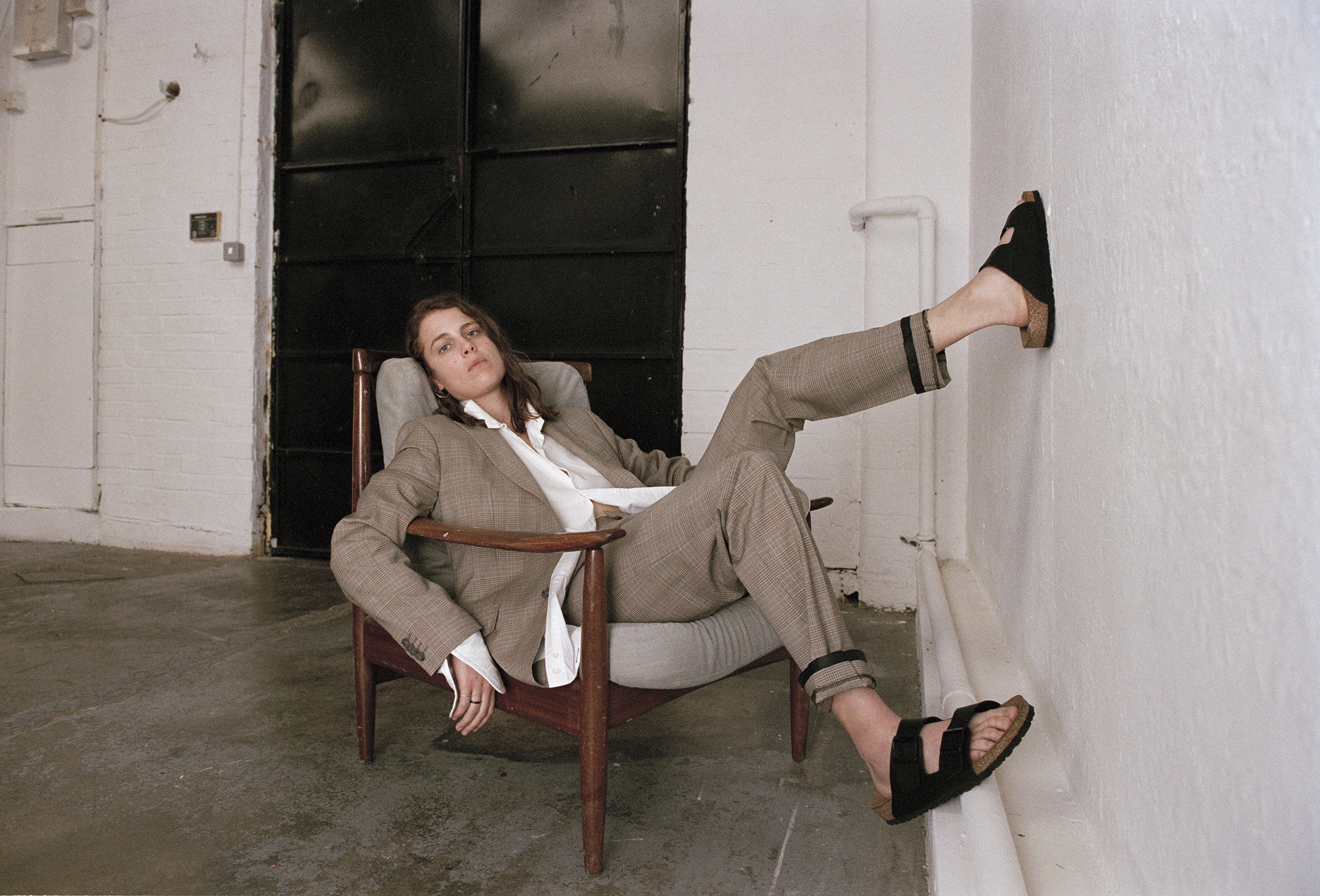 Marika Hackman says it how it is

Marika Hackman is not one to shy away from a bold declaration. The lyrics on last year’s Any Human Friend are anything but subtle, and in any other decade you might even call them jarring. But here we are in an age of awakening and acceptance – thank fuck. And in the spirit of that, Any Human Friend is a refreshing listen from a woman who’s, well, got some shit to say.

“I decided to just be incredibly upfront and push myself to the limits of how direct I can be,” Hackman tells me of her critically acclaimed third record. “I found some of the lyrics intimidating at first, but it’s always good to challenge yourself and keep pushing into uncomfortable territory. Anything with a bit of danger is ultimately going to be more rewarding.”

There’s a lot of vulnerability to endure here, but the intimidation factor Hackman speaks of is undoubtedly due to the exploration of sexuality in all of its many divisive forms. She assures me she didn’t seek out a specific theme whilst writing, but the most memorable songs from a lyrical standpoint certainly fall under that umbrella. She also approached the instrumental foundation of the songs differently than ever before, ditching the guitar completely at first and creating the groundwork on bass and drums. Sure, it’s not as “dangerous” as wearing your heart so boldly on your sleeve, but it is a source of discomfort for a songwriter to step away from his or her main instrument in favour of one less familiar.

One reward from creating in such uncomfortable territory came early on as Hackman – to her delight – managed to shock two very important audience members: her parents.

“Haha yeah, I mean, I think they love to wind me up in a sort of faux-shocked way,” she jokes. “They’ve always said that I should write about whatever I want and never get worried about offending them in any way. I send them all my demos when they’re done, and to be honest, they’re both pretty cheeky sods so I can’t imagine them being genuinely distressed with anything I would write.”

Overall, Any Human Friend is first and foremost an insightful look into all facets of being a human being, and how we relate to one another. It just so happened that putting the sexual interactions under a bit of a crusted-over microscope was of particular interest to her. Take ‘hand solo’ for example. Yes, that is a wickedly clever nod to masturbation, with many more contained within the song’s lyrics. A not-so-subtle way of acknowledging the fact that, hey – everyone does it. And, if a song about it weirds you out, well a) you obviously weren’t listening to Green Day in the ‘90s and b) you should probably go wank a bit to lighten yourself up about the matter unless you’re overly superstitious.

I think I would’ve really appreciated a record like Any Human Friend – and all of the other amazingly frank queer records out there at the moment – when I was a kid,

That “tinge of sadness” isn’t exclusive to this song. As a queer woman in the music industry, Hackman has constantly navigated seas of inbuilt shame and a culture dominated by the male gaze. While writing Any Human Friend, she really had one overarching goal: to make listeners feel empowered.

“For most of my life, I didn’t see my sexual fantasies, or my idea of a nuclear family, or my future with someone I love, ever reflected back at me. It makes you feel so ‘other’, and it makes you feel like these things might not ever exist for you. We all want to feel seen, we all want to feel like people care about our own journeys in life, and it’s hard to get into that mindset when you’re fed a ‘prince/princess’ narrative from day one. I think I would’ve really appreciated a record like this – and all of the other amazingly frank queer records out there at the moment – when I was a kid, just so that I felt validated on a wider level.”

That’s the beauty of Any Human Friend – everyone in this life has experiences unique to them, but not so different from another’s that they’re unrelatable at their core. The album’s title came from a documentary Hackman happened upon during the making of the record. It highlighted the story of a group of four-year-olds that were brought into an elderly care facility for dementia and other degenerative brain diseases. There’s a segment where two little girls are talking about the experience, and they are asked if they’d made friends with the elderly people. One of the girls responds, “Yes – any human friend.”

The album is all about self-acceptance and, through that, learning to accept each other and shed preconceptions.

“I just thought it was such a pure sentiment,” Hackman fondly recalls. “It’s so simple and so liberating to think that if we shed all the judgemental walls we put up to protect ourselves, and just accept people for who they truly are, we would open up so much more room in our heads and probably find it a lot easier to be at ease with ourselves.”

In a similar fashion, the album cover – featuring Hackman in her underwear holding a baby pig – was also inspired by another work of art. Dutch photographer Rineke Dijkstra produced a collection of work that Hackman discovered while studying art at school. They were a series of portraits showcasing new mothers shortly after they had given birth. The powerful vulnerability of the subjects struck a chord in Hackman which she couldn’t deny.

“I wanted to recreate these images with myself in place of the mothers, as exposed and raw as they had been to reflect the directness of lyrics and subject matter on the record. I chose to hold a piglet because I feel that pigs are a misunderstood creature – there’s the perception that they are dirty, stupid and somewhat lesser beings, when in fact they are highly intelligent and complex creatures.

“The album is all about self-acceptance and, through that, learning to accept each other and shed preconceptions. So here I am standing, stripped to my underwear and holding on to the piglet as if to say, ‘I accept myself, I accept the pig, and I’m here for you to accept us, for everything that we truly are, warts and all’.”

So here we are. 28 years on this planet, three albums under her belt, and plenty of warts that she is proudly displaying for her family, friends and fans to take in and accept, with the hopes that those sentiments will also turn inward. Life’s not always neat, and things aren’t always what people make them out to be. Take Hackman’s piglet as exhibit A. You may not feel comfortable in your own skin at this very moment, you may look around and feel like an outcast or an imposter but when you strip life down to its very roots, we’re all just human beings looking for connection – for any human friend. Ten years ago, Hackman didn’t have this all figured out. None of us did. It takes a whole lot of living to get where we are now, and it’s going to take a whole lot more to get to something even barely resembling enlightenment.

Hackman’s advice for her 18-year-old self?

“Ditch the tie-dye and buy a hairbrush.”

Catch Marika at Gorilla in Manchester on 24th February, tickets available HERE. Alternatively, listen to her on Spotify and Apple Music. Get the latest edition of our magazine featuring interviews with Soccer Mommy, Alfie Templeman, Black Pumas and Tennis HERE