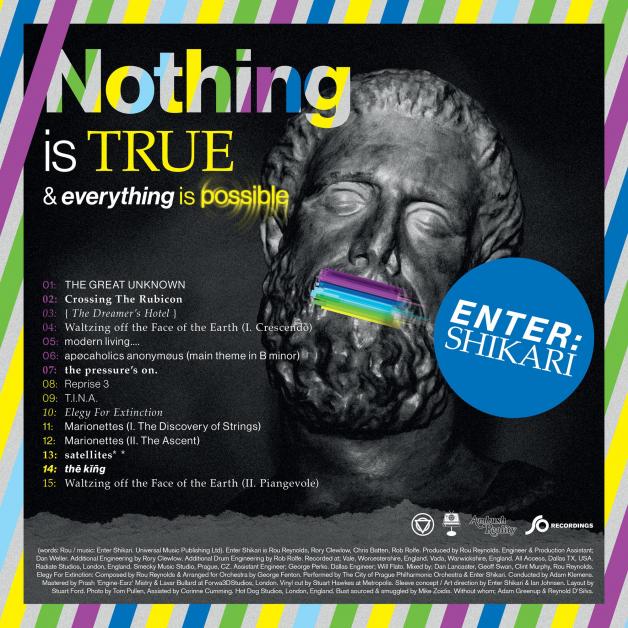 Enter Shikari - Nothing is True & Everything is Possible
Reader Rating1 Vote

The boys have pulled sounds from their entire career for this genre-spanning work.

‘You don’t know Shikari? This is where you start.’ That was the dream for Enter Shikari’s sixth studio album, Nothing is True & Everything is Possible. It began as a project to provide the most definitive Shikari album to date – and it kind of does that.

The reason for this is because Nothing is True & Everything is Possible feels more like a mixtape than an album. Like one of those Spotify ‘This Is’ playlists, it draws from many of the different voices that Shikari have imbued in their past work.

We can see represented the more overtly-thematic projects such as Take To The Skies (2007), A Flash Flood of Colour (2011) and The Spark (2017). We also see the more jumbled, fun-yet-unfocused albums like Common Dreads (2009) and The Mindsweep (2014). On first listening, their latest album doesn’t seem to fit together – but if their original point was to be representative of everything Shikari has done up until now, they’ve hit the nail on the head. But there lies the issue…

If Nothing is True & Everything is Possible does one thing, it demands honest connection over philosophical or political uncertainty, which is a demand Shikari have reiterated many times. They do it with a real honesty of purpose, which may sometime be lost behind cliche, but you have to respect it all the same. The album begins with ‘THE GREAT UNKNOWN’ “It’s in at the deep end, dealing with the disorientating nature of the unknown.” said Rou Reynolds, the band’s vocalist and synth player.

Touching the unknown, fording the way into an uncertain future is a big theme in Nothing is True & Everything is Possible. Second track, ‘Crossing the Rubicon’ explicitly tackles this idea, taking direct inspiration from Julias Caesar’s crossing of the River Rubicon in 49. B.C.E. To ‘cross the Rubicon’ means to ‘to take an irrevocable step that commits one to a specific course’, which in this day and age is a crucially serious act. The track also contains a sonic cameo from Take to the Skies’ ‘Labyrinth’, the synths of which can be heard through the pre-chorus.

There are equal parts delirious joy and industrial uncertainty in this album. Pop sounds clash with rave instrumentals, guttural guitar with elysian orchestration. For example, the first track that features orchestration ‘Waltzing Off The Face Of The Earth (I. Crescendo)’ reveals a dark, almost absurdist denial of current global issues.

In true Shikari style on these type of songs (Think ‘The Jester’, ‘Live Outside’ and ‘Jonny Sniper’), there’s an almost circus-like, tongue-in-cheek quality. While this can be very fun (You can’t deny ‘The Jester’ is a bop), it can result in some fairly hackneyed lyrics. “You can’t trust your own eyes/ And you only hear lies” sings Reynolds, which could have been pulled from any third-rate spoken word poet’s repertoire. There are a number of times in this album (and previous works) where Shikari’s lyrical force is marred by clumsy metaphors and poorly-chosen rhyme.

However, this isn’t to say this album loses its impact. Tracks such as ‘the pressure’s on.’, ‘thē kĭñg’ and ‘satellites * *’ are the songs that sound much more fully-fledged, much more present and even seem to fit together better than others.

‘T.I.N.A’, which means ‘there is no alternative’, is a real showstopper. It’s bright, punchy, visceral, and shows that perfect space where Shikari marries electronics and post-hardcore with no complaints at all. Honestly, it’s unputdownable. This track effectively delivers a slice of each era of Enter Shikari, served in a neat three minutes and five seconds of heraldic bliss. It’s also one for the anti-capitalists.

One thing Enter Shikari are good at is creating a soundscape. They did it perfectly in Take to the Skies, and they have glimpses of this through Nothing is True & Everything is Possible. However, when you try and make something that represents all the work in your past, you alienate the chance of a cohesive whole. Some of the songs on this album don’t fit together. They don’t flow naturally from one to the next.

“Is this a new beginning or are we close to the end?” the opening track inquires. In this album, Shikari don’t answer that question. Rather, they say, maybe implicitly or accidentally, that this is more ‘continuation’ than anything else. Shikari will continue to blur the lines of genre, continue to focus on tough subjects, and continue to write from the idea that acts as their emotional baseline; hope.

The fourpiece are good at tackling multiple sounds, and multiple issues, at once – but it can leave their work feeling stretched. It would be interesting to see Shikari’s take on one idea, one set theme and run through an entire narrative with it, just to see the result. Something like a concept album would suit their ability down to the ground. Like the uncertainty represented in Nothing is True & Everything is Possible, we’ll just have to wait and see.

We’d say that Enter Shikari have succeeded in creating their most definitive album to date in Nothing is True & Everything is Possible. But have they created their best album? Not yet.