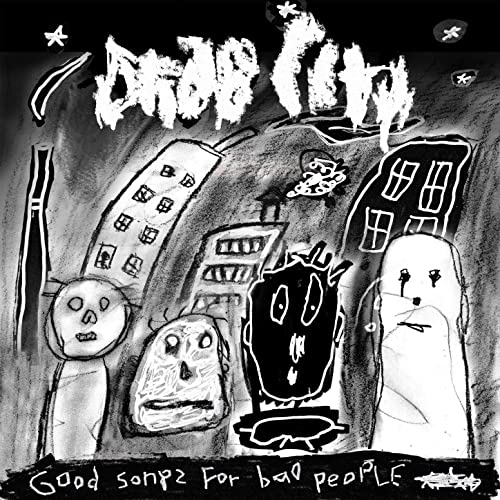 Turn down the lights, stick your headphones on, and melt into Drab City’s ethereal debut. Good Songs For Bad People oozes with Portishead-like production – combining gothic elements with smooth jazz and dark synths to create a truly haunting record that removes you from reality.

Having previously worked together on a joint album named Faminine Mystique, Bosnian singer Islamiq Grrrls and Berlin based producer oOoOO have come together again. The introduction of bigger and more experimental instrumentals dwarfs the last collaboration; this makes it almost irrelevant in comparison to the record Drab City have now created. It’s an evolution we love to see.

Drab City never let themselves get lost in overcrowded production. Instead, they opt to have each track impressively balanced in a way that allows for both the vocals and production to become equals. Secret elements are harboured within the music, many of which are only noticeable on a second listen. A warbling guitar lays hidden behind the chorus of ‘Just Me & You’ and the bassline on ‘Troubled Girl’ hangs from the tune’s rafters – subtle but important.

Sonically, the record creates curious instrumental fusions, dissimilar to anything I have heard before. Diaphanous vocals float cautiously over often frantic musical backdrops. By switching from location to location, it takes you on an unearthly auditory journey through jazz bars and abandoned buildings but never allowing you to feel lost. It’s a perfect soundtrack for those nights spent staring out of your window at 3am.

A few standout tracks include the hectic ‘Live Free & Die When It’s Cool’, a hectic and cold number discussing the frivolity of life, and ‘Hand On My Pocket’, a dreamy collection of synths accompanied by a heavy trip-hop baseline. Meanwhile, ‘Working For The Men’ is a menacing tale of revenge that lets “straying” men know that their days are numbered; the delivery of the vocals wouldn’t feel out of place in a horror movie nursery rhyme, and the drum pad breakdown paired with eerie synths makes this track feel all the more real.

‘Devil Doll’ has a similar feel, wickedly sinister as you listen. Drab City go full Portishead on this one, imbuing elements of trip-hop and post-punk to fabricate a grungy yet moving piece of music. The echoing of the mellow keys guide us into the tune, before being later accompanied by the calming vocals of Islamiq Grrrls. However, these softer parts of the track divulge into an intriguing electronic breakdown. A spattering of muttered, inaudible vocals paint the backdrop of the song, creating a sense of unease and nervousness before the keys start again and the peace is found. This switch-up displays the lost nature of the song and it’s in parts like these where the album should be celebrated. Grab the champagne.

On Good Songs For Bad People, Drab City have displayed that to them, there are no limits. They can effortlessly fuse together genres and create music both scary and moving. Just make sure you check under your bed after listening.

Listen to Drab City on Spotify and Apple Music. Oh, and if you enjoyed this, check our our print magazines HERE.