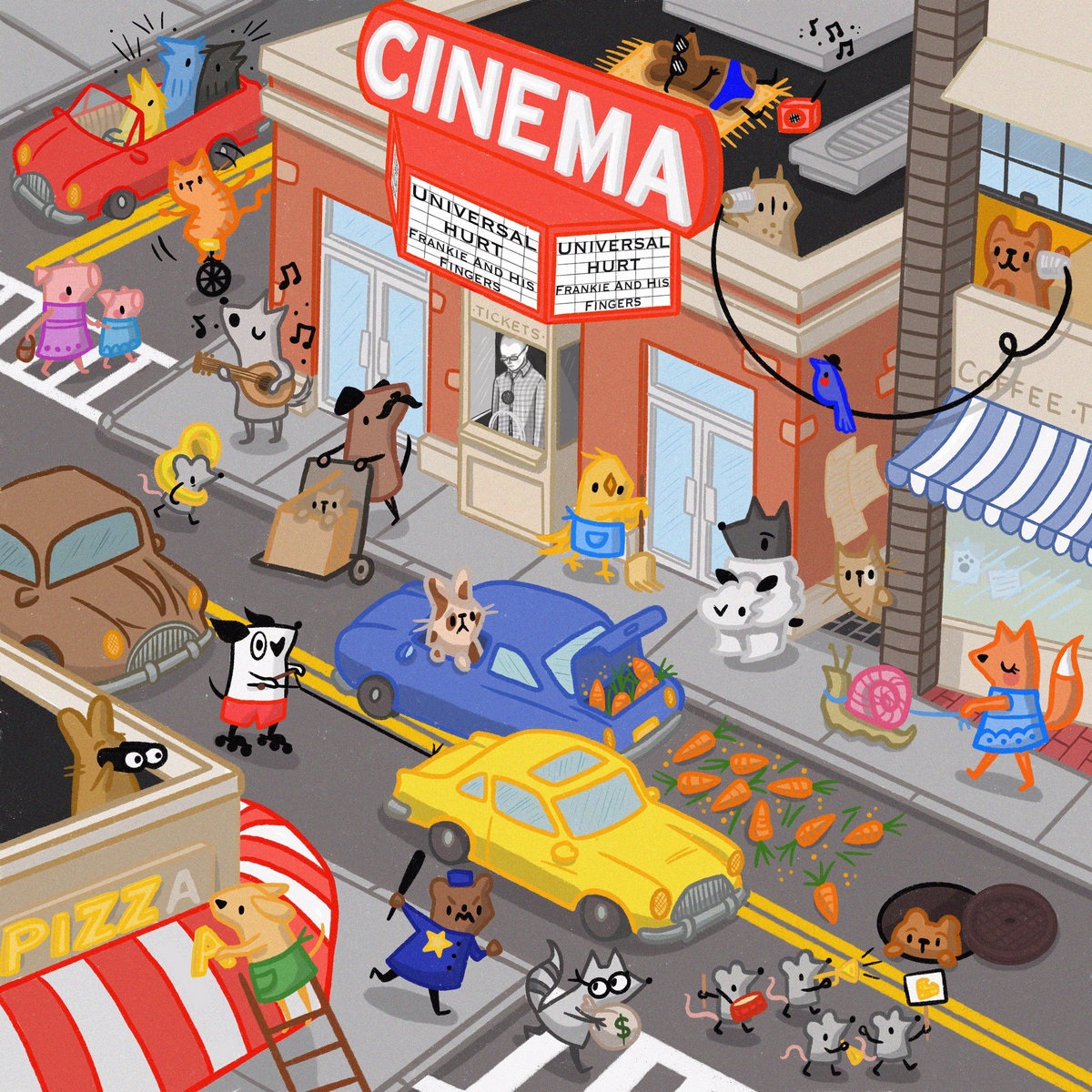 If you’re not from the Hudson Valley area of New York, you’d be forgiven for not recognizing Frankie and/or His Fingers. The local staple began as a duo between multi-instrumentalist Frank McGinnis and drummer Sammi Niss when they were just teenagers. They crafted quirky pop-rock that was almost too smart for its own good, and most certainly ahead of its time.

But it’s rare for an underground band that begins at such a young age to have any significant longevity. The project fizzled out in favour of a multitude of new ones that spanned every facet of the indie rock spectrum. 13 years later, we find the band not only reunited, but doubled in size and encapsulating the best of what they’ve learned in their time apart.

So it’s fitting that McGinnis spends most of Universal Hurt ruminating on youth and the passing of time. ‘How can it be so hard to spark like I’m still seventeen?,’ he bemoans on ‘To Die Would Be a Great Adventure’.  This sentiment is echoed throughout the record, often citing personal stories with such vividness that they almost feel familiar to us.

But despite all of this longing, McGinnis remains grounded. ‘Why do you act like your youth is dead? / The day will come when you wish you were this age instead…’ from ‘Sad to Let You Down Like This’ almost acts as a mission statement for Universal Hurt. We spend so much time longing for simpler days and younger versions of ourselves that we forget the clock keeps on turning.

It’s that sense of living in the moment that remains just out of reach, almost all the way until the penultimate track – the album’s best – ‘Cake Heart’. ‘I strapped in tight long ago / Fuck if it don’t feel like home…’ McGinnis sings within a chorus that’s sure to stick with you long after it ends. It’s a reminder that there is beauty in existing exactly where you are right now; simpler times only seem that way in hindsight. If you stop and take a look around, smell some flowers, eat a piece of cake – life can seem pretty damn simple. It should be. We’re the ones who complicate things, and that right there is the hurt that’s so universal.

For a band that has been out of the game for a decade and a half, there’s not a lot of rust to shake off. They’ve aged like a fine wine, and display each of their influences like a badge of honour. With its Death Cab-esque guitar weaving, Springsteenish storytelling and early-aughts pop-rock sensibilities, it’s a challenging listen – one that demands repeat listens to fully appreciate. And it’s worth doing so, if for no other reason than picking up on the witty references to Golden Girls, The Wonder Years and so on. These, and many other subtle intricacies, unpack themselves over time. So grab yourself a pair of good headphones and strap in – this ain’t no iPhone speaker record.

Haiku:
Yes, getting older
Is a universal hurt
Sung of here deftly

Listen to Universal Hurt on Spotify, Apple Music or Bandcamp.