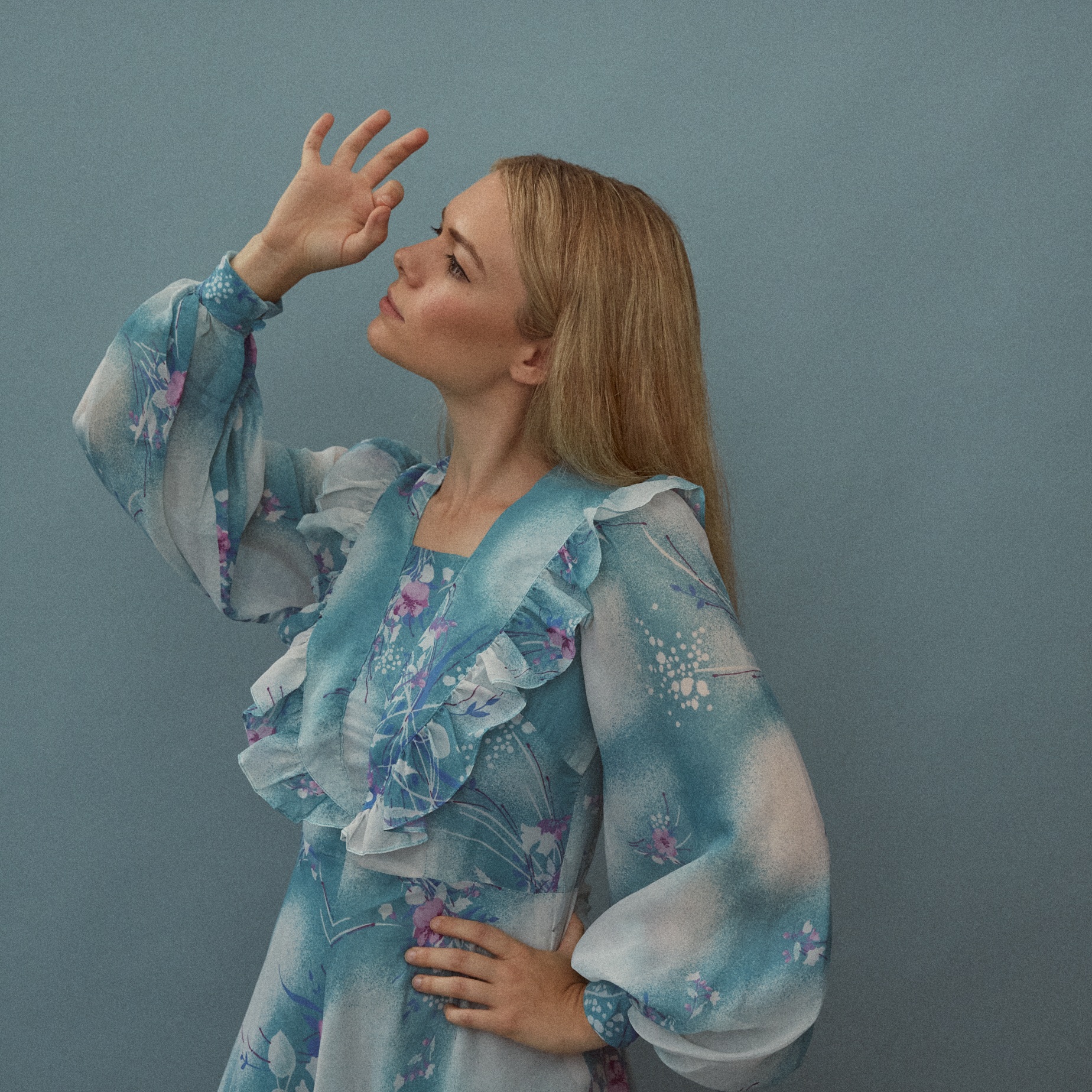 Chloe Foy has dropped her debut album today. Fancy some commentary as you sit and listen? Thought you would.

‘Where Shall We Begin‘
“[This is about] life and it’s complexities, deciding whether to hate or love our time on earth. And really at the end of the day, what does it all mean?

“The dance of the day-to-day. Feeling pulled in all sorts of different directions by dreams, desires, duties. The most existential song on the record and most abstract lyrically perhaps. I’m talking about life not being as we hoped or expected. When you lose things/people you love you realise life is more complex than it first appeared and feel quite betrayed by that. ‘Take your time and feel it’ refers to those who are around to comfort us and who bring us round to the idea that maybe it’ll be okay.

“It was one of the last songs written for the album; this has evolved quite a lot since its conception in the studio. It’s steadier and pulls around a bit more now when played live. I wanted this expansive, dreamscape to reflect the hazy nature of the lyrics. Harry, who co-produced, was listening to Tchaikovsky at the time and I think the harmony as a result is quite ‘classical’ in places.”

‘Deserve‘
“The frustrations of love and war and self-destruction.

“This was written about the frustrations within a relationship, when you want the other person to give a little bit more of themselves to reassure you that they’re not going anywhere while also acknowledging the demands of this request. It’s about give and take in a loving relationship and trying to work out where the compromise lies and whether you’ve got what it takes to go the whole way.

“Richly laced with strings, embracing the darker, fuller textures that I’ve often admired on other records. It’s steady in its approach and was a conscious choice to keep the chords simple and the same throughout, with the vocal melody fairly unchanging but insistent and gliding. Nods to the classic Americana that I love, Neil Young particularly, as well as Sharon van Etten vocals on the tune ‘Every Time The Sun Comes Up’, slide guitar by Mr Samuel T Quinn, soaring strings by Harry F Smith. I played harmonica on this – a nod to my dad.”

‘Work of Art‘
“This was born out of my frustrations with myself. Sometimes I hold onto things so tightly as a form of defence, which was ultimately impacting on my enjoyment of life and I was struggling quite a lot with depersonalisation and panic as a result.

“I went on tour with Jesca Hoop and I had a moment quite early on where I realised, you’ve either got to let go and enjoy it or go through life never enjoying the moment. I had a bit of an epiphany on that tour in that I finally felt like I’d found my place in the world. It felt very right to be there and I started to open up again. All because of this beautifully warm reception of the crowd each night and their willingness to take me as I was stood there in front of them singing my heart out. The song had been sitting around for a while without a finish and that experience enabled me to come home and write an ending.

“When I’m singing ‘bodies glow, you’re a work of art‘ I’m talking about music lovers together in a room, enjoying the moment. As a result, it ended up being quite an upbeat song. It’s quite a new direction for me in that it has this prominent drum beat and quite a singalong anthemic ending with driving electric guitars. Production wise, we were paying tribute to Tyler Ramsey’s record For The Morning, which we’d listened to all throughout the recording process.”

‘Evangeline‘
“Written for a dear friend who lost her mum. Having gone through my own grief, I felt her pain acutely and wanted to write something that would say, ‘don’t worry I’ll always be by your side and we’ll get through it together’. I was also imagining what her mum would want her to know – that she was loved and always would be. Ultimately it feels like a meditation on the power of female friendship and how we can lift one another up.

Every so often I take myself off on self-imposed writing retreats. Having juggled music-making with full time work for many years, I found I often needed to take myself out of Manchester and to find some peace where I could let ideas that had been fermenting for a while, spill onto the page. This was one of those. Written next to the sea in Pembrokeshire in the midst of a storm when all power was lost. There was nothing to do but make this song materialise. I wanted to keep the arrangement to this on the folkier end of the spectrum.”

‘Asylum‘
“It felt really important to me that ‘Asylum’ has its place on this record. It was a standalone single in 2018 and really took off on Spotify and has been added to so many people’s personal playlists around the world. It was the release that led me to give up my job and take the plunge with music full time so it feels special to me. It was also the first song I ever recorded in Pinhole Sound Studio with Adam P. Gorman. I loved his way of working and it was the first time I’d felt really comfortable in a studio. We started adding these beautiful expansive strings, harmonium and the harp playing of Rachael Gladwin and this soothing landscape came together, to reflect the notion of the song as trying to find peace in a frantic world. The new album version brings in a brand new strings intro for the song, as well as slightly more expansive production values than the original single.”

‘Bones‘
“This is about depression and grief and learning to love again after you’ve suffered the biggest heartbreak of all – the death of a loved one. It’s quite abstract in its lyrical delivery, but aims to evoke a feeling more than anything. Its one of the oldest songs on the record. One which I sort of rediscovered in the process of doing demos for the album and thought a new arrangement and new take on it could work really well. It’s one of the darker songs on the record. I wanted to add these double tracked reverberant vocals on it for a witchy ethereal feel.”

‘Shining Star‘
“The endless, and sometimes fruitless pursuit of happiness in a life that is dominated by the pursuit of money – something that I saw my dad do. At his heart he was a talented artist and potter, but was working in an office so was very unhappy. It gave me an early life lesson to follow a creative path if it presents itself and to ignore the pressures of society to conform to a certain life. Because it won’t necessarily make you happy.

“This is the one I had the least clear idea of production-wise. It just came out this way. It was important to keep the drive and sparseness of the drums and percussion. It started off as a sombre, slower Nick Cave-esque tune. Our drummer Dan Wiebe suggested the skippy, rhythmic beat and I really liked it so we went from there. So it’s a weird clash of melancholy songwriting with a compound rhythmic lilt.

‘Left-Centred Weight‘
I”t’s about feeling that everyone’s going to die, which comes about from having grieved once before. But ultimately coming to terms with it and making peace. Harry had the most freedom to run with this track production-wise. As a bare-bones song it was written a long time ago – as far back as 2014, and has had many different arrangements along the years…”

‘And it Goes‘
This is about a relationship of mother to daughter when all else is gone and stripped away. This was a moment to acknowledge that the loss of my dad wasn’t just about me. It was about how I got through it with this wonderful ever-present warmth and love from my mum. If you could be healed by unfaltering love then she was doing just that.

“My favourite kind of soundscape: strings, clash and resolve, choral textures. I wanted this to be a strings-based song with quite a choral feel on top. The last section is reminiscent of lullabies, because that’s the kind of comfort and soothing I felt from her.”

‘Square Face‘
“This was written at a time when I was really struggling with my mood and trying to make sense of what life means if anything at all. I had felt a loss of creativity and had total writer’s block for about a year. This song was an attempt to write again and actually it was just this three chord simple acoustic guitar song which I felt was very juvenile and wasn’t even going to put it on the record, but the string arrangements and Dan’s drums have made it into something really hopeful. It feels a bit like a lullaby-come-waltz that you can imagine being rocked to. For me songwriting has always been a process of self-soothing and this was very much one of those moments. How do you cure writer’s block? Write about having it.”

Listen to Chloe Foy on Spotify and Apple Music.