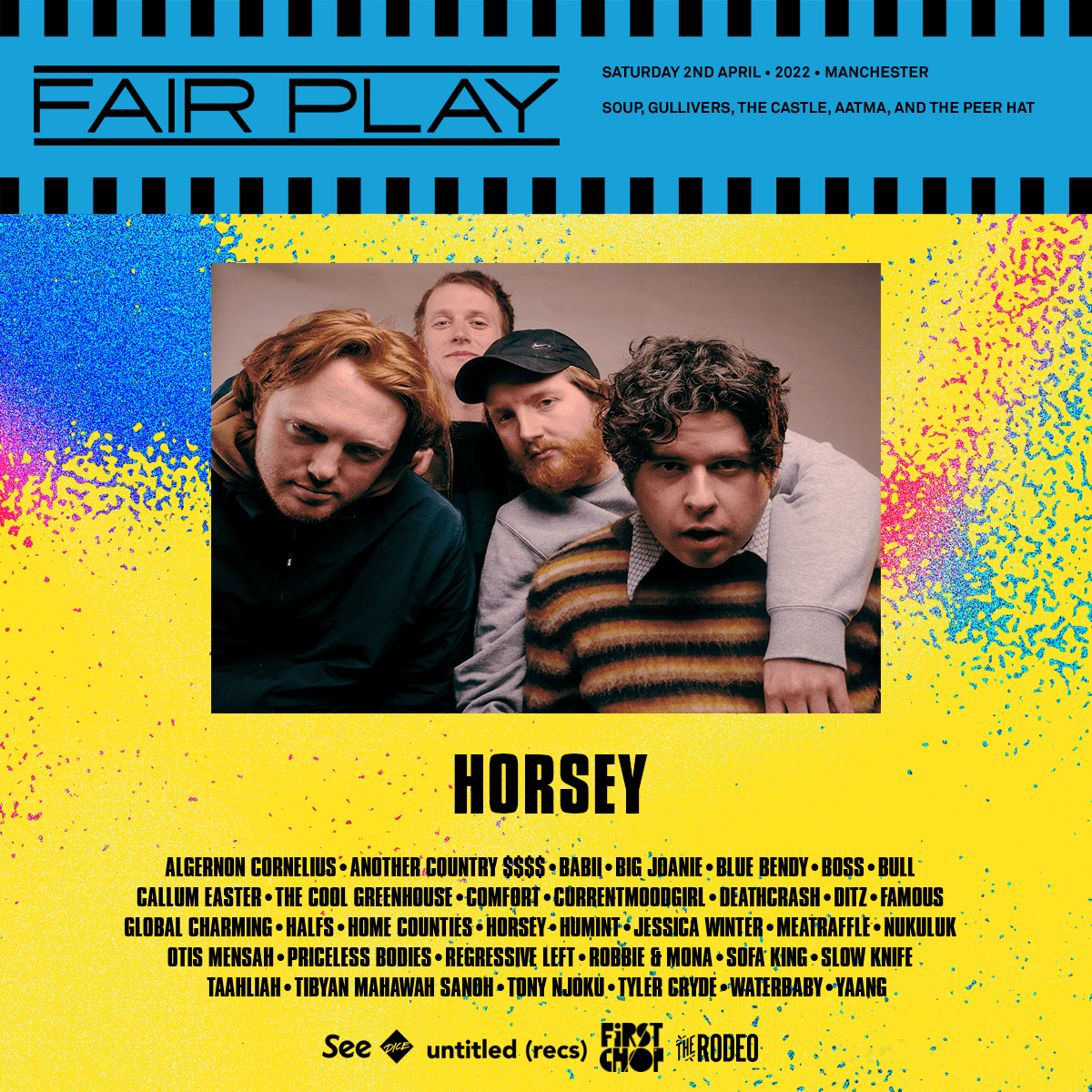 Horsey have always been delightfully unpredictable. Sporadic and inviting, the band’s most defining feature is their refusal to hold back, littering each track with an array of sonic elements including call-and-response quips, isolated guitar yelps, and jaunty piano melodies.

It’s a sound that constantly surprises, and delights in turn. It’s natural then, that behind the madness the duo, Theo and Jacob hold the same surprising nature, chatting constantly as we speak on a mellow Thursday evening.

Ahead of their eagerly-awaited slot at Fair Play Festival, the band spilled all the details regarding their upcoming show, the anniversary of their first album and their striking sound.

I have to ask, where did the name ‘Horsey’ come from?

T: We were in a fish and chip shop, brainstorming. iIt was the only one we came up with that wasn’t tragic.

J: I’m not too embarrassed to be in a band with our name. It’s quite cool. It doesn’t doesn’t really mean anything, so interpretations are pretty open.

You guys have known each other for over two decades, were you always making music?

J: I definitely wasn’t into music or anything until I was about 10. But eventually we got into rock. We were really inspired by the Camden Market skater grunge.

T: My dad has really encouraged me a lot with music and made sure I had great music lessons. I had a drum kit, so when Jacob was coming over, my parents really encouraged us to play it. Jacob already knew how to play the blues scale on bass, so it started there, we began making tracks on the computer. The first thing we did was very blues-based, it was called ‘Bluesy Ruzi’. We still have that recording.

Did you guys’ close relationship make it easier to experiment musically? How did you reach your current sound?

J: From my perspective, I think it was quite natural. Theo had a few songs and we just got on with it. We never sat down and asked ‘what kind of music can we make?’ It was always just whatever was going through our heads at the time.”

T:  The thing about Horsey, it is an incarnation of other projects that we did in the past. We started out as teenagers and there was a time when we were playing gigs where people didn’t really like us. It felt like we were battling against, like people’s interests. That really spurred me on to be honest, I wanted to move people out of their comfort zone. I wanted to do more of that. So in the early days, it was a question of how obscure can we be in our life? Only recently have people started taking an interest, which has been lovely.

You came up in the London scene, home to its fair share of fresh talents. What was developing in that crowd like?

J: Only recently has the London music scene actually been quite subversive and good, in my opinion. So it’s kind of naturally sort of like we fit into it as a lot of the acts are really experimental like us. Whereas when I remember when we were starting out, every band just sounded like the Kooks. A lot of it I remember really disliking, so we kind of went against it.

This all leads us to your debut album, Debonair. How was the process of making it?

T: We had a manager who had connections to a really good studio. So we booked it for eight days and got to work. Ross, our engineer and Max the producer are amazing, so it all came together.

J: It was still a very slow release though. We did a session, like two years before it came out. And then it got delayed by COVID.

How does it feel looking back a year on from its release?

T: It was what we needed. Honestly, I don’t think we ever really sat down and decided we  should make an album. it just kind of got to this point where we were like, we should probably do it now!

J: I kind of didn’t really know how to do an album, until I did my own solo stuff under Jerkcurb. It taught me it is possible, even if you aren’t working with much. I mean, everything that we’ve that I’ve done has come from us. So part of creating an album is to support yourself while still figuring out how to make the art you want. But not having much to work with leaves so much room for experimentation. Lack of money means you’ve got to be very strict sometimes. If I had 50 grand from a label, I would probably have more time to mess around.

T: We’re super proud of it. It’s one of those milestones where you really want to get it done, because we’ve put all this effort into the band. So it feels amazing to get there.

I kind of wish we reached this milestone, like six years ago, but at the same time, I think it’s kind of good that we spread it out. When I was 19 I thought I was amazing, but looking back I was much worse. My ego was massive, but my actual talent was way worse. We’ve got comfortable jobs and girlfriends and stuff now, we’re stable. So it really was the perfect time to create. In a parallel universe, maybe a 2013 Horsey album would exist. But now it’s done, we just want to do more.

Finally, are you excited to play the Fair Play Festival?

T:  Yeah, we love Manchester, and Liverpool, anywhere outside London. They’re always so much nicer.

J: We toured there a while ago, so it’s really exciting to come back.

T: It all comes down to long-term. We just want to utilize the time we have now. Record and create more.

J: Just carry on life, and have a quick death. That’s my goal.