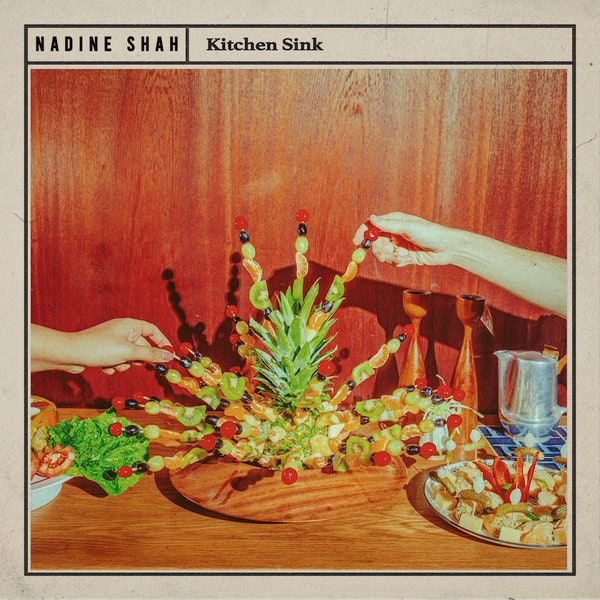 Sinister and serious, Nadine Shah has already developed a reputation for cutting through bullshit. On the Mercury-Prize-nominated Holiday Destination, Shah commented on racism, refugees and the patriarchy atop of intricate, sneering instrumentals. Kitchen Sink sees Shah continue to use her voice, reminds everyone that she’s always got something to say.

A cutting-edge album, the jaunty guitar lines create an uncomfortable feeling, but Shah’s more playful melodies make it a pleasurable, friendly listen – the production is bigger and the album is more lively as a result. Shah maintains her unique sense for rhythm and melody throughout the verses, the choruses often filled with howls, sirens, synths and trumpets.

There’s an effortless cool to the album; the music toys with you. Are you meant to feel disturbed? Or, are you meant to be dancing? Three songs in and your body decides it’s both. There’s a real strong rhythm throughout, particularly on ‘Trad’ which hits full speed early on and refuses to let up.

At times the album sounds slightly dystopian, however: ‘Kite’ sounds like theme music for your walk to the gallows and even the hints of Geordie accent that flicker through aren’t enough to add any friendly warmth. The excitement generated by the first half of the album – the whirring rushes of synth and pounding drums – means the sudden slowing-down in the second half is too sudden. Rather than subtly breaking, the album grinds to a halt, creating a jarring ending. In fact, ‘Wasps Nest’ slows the album so much that it struggles to get going again, and closing songs ‘Walk’ and ‘Prayer Mat’ sound washed-out compared to the earlier energetic numbers. Then again, these songs contain some of the most insightful lyrics on the album, so it’s worth sticking around.

And it’s in the lyrics where the album excels. A more introspective album, Kitchen Sink explores Shah’s life as a 30-year-old woman and the societal pressures and expectations placed on her: ‘Shave my legs / Freeze my eggs / Will you want me when I am old?’ she questions on ‘Trad’.

Fitting for the time, there’s a drinking theme running throughout. ‘Buckfast’, ‘Ukranian Wine’ and even ‘Dillydally’ – sounding like the infamous Bud Light ad, ‘Dilly Dilly’ – all detail around the consumption of alcohol. The latter features a recorder, while the former is a standout song on the album. The daggering guitar line, the playful piano melody and the percussion (which sounds like someone simply hitting pots and pans) all come together to create the swaggering ‘Buckfast’; Shah’s vocal delivery is purposefully monotone, her Geordie accent slipping through adds warmth to the track. Lines like ‘I know why there’s an aching in your write / now you’re buckfast pissed’ are delivered with a wry arrogance – imagine a sarcastic smile appearing on Shah’s face as she delivers the song’s punchline.

Whenever Nadine Shah releases new music, she’s always got something important to say, and Kitchen Sink is no different.

Kitchen Sink is out today, so hop to it: listen on Spotify and Apple Music.