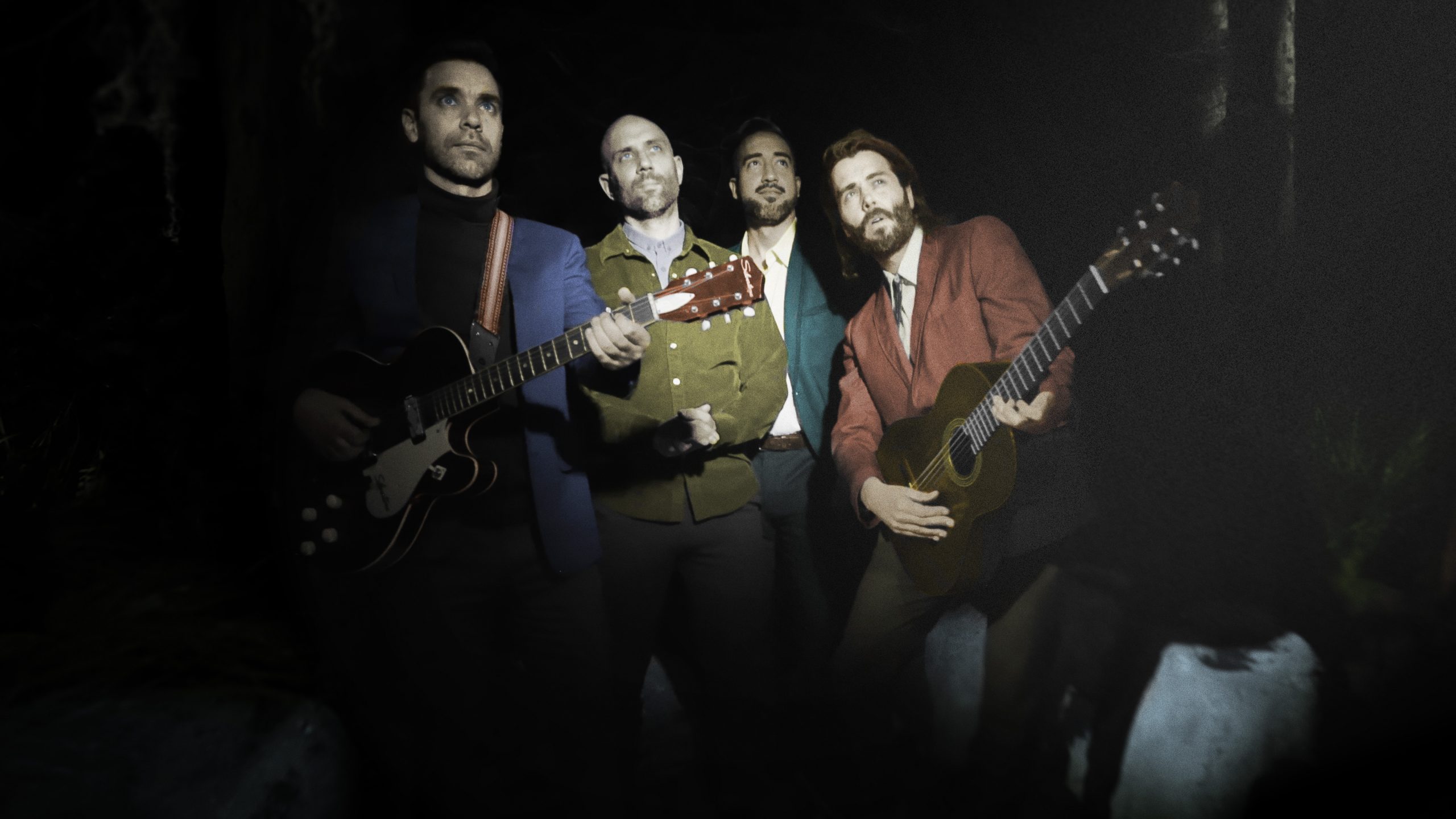 I’ve never taken to audiobooks, but I’m a sucker for musical narrative. With a fourth album on the way, Lord Huron’s extensive universe of characters and landscapes is due to continue, meaning I need never bother downloading Audible for a free trial. Upon e-meeting the band’s frontman, Ben Schneider, it’s clear that metaphors and alternative perspectives are embedded in his way of thinking.

“Waiting to put a record out is like… I don’t know what it’s like being pregnant, but I feel like it’s like that: where you just can’t wait to get it out in the world and let people meet your creation.”

Through Zoom, I can practically see the storyboards in his mind drafting the experience of a mother to be – admittedly something of a tangent from the dead men and cosmonauts we’ve been introduced to on their previous records. As for Long Lost, the fourth of Lord Huron’s LPs, ghosts return in a setting closer to home than usual.

“I guess the genesis for this record was it started in our studio, Whispering Pines,” Ben explains. “We’ve been working there for the past seven years, did our last three records there – it’s kind of like our clubhouse.

“It’s this great old studio built in the early ’70s; we took it over after it had been abandoned for about 25 years, so it’s filled with all this old outdated gear that we had to strip out and rebuild. It’s a beautiful space.

“We’ve always wondered about who had worked there before us,” he continues. “We found a little information, but there’s not much. So, we started imagining who’d gone through there and created these characters of old showbiz folks who’d come in and out of [the studio], and what they’d done there.

“Then I started writing songs from their perspectives: I find it really useful to create avatars to write songs through, sometimes just as a way to change up my perspective. I always like to start with something that’s personal, but then look at it a different way – through the eyes of a different type of person.”

I discovered Lord Huron when I was about 15; ‘Ends of the Earth’ played during the credits of an offensively crap teen romance film (whose soundtrack alone means I have seen it too often to justify), and thus began my longing to follow wherever those avatars roamed.

Through each album, their stories and odysseys filling my headphones, the boundary between fiction and reality blurred remarkably. Always curious to know at what point the avatar takes over, seven years later, I got my answer: “I guess the balance is about the same, and like you said, it’s a combination of truth and fiction, really,” Schneider muses.

By creating a fiction around a truthful emotion, you can kind of make it easier to digest and get out more of the truth of it, in a strange way.

“Generally, the genesis of a song is autobiographical or very nearly autobiographical, [seeing] someone close to me go through something particular. But then, you know, the way those things unfold in real life is complicated and hard to communicate in a three-minute song.

“So, it’s more functional sometimes to use fiction to get to the truth of it faster. Just like in the way of good fiction of all kinds – in novels and films, [too] – by creating a fiction around a truthful emotion, you can kind of make it easier to digest and get out more of the truth of it, in a strange way.”

I added that there’s perhaps an advantage to be had in creating some distance when putting your emotions down on paper, to Ben’s undiluted agreement: “Absolutely, and also, I’m fairly private about my personal life. That’s something I’d like to maintain, you know: that part of my life is mine. It’s a nice way to deal with things that are real, but in a way that’s less explicitly autobiographical.”

The unique result is a relatable yet escapist listen in each of Lord Huron’s existing albums, and Long Lost is no exception. That being said, this newest addition to the repertoire offers a closer, more obvious look into the lives of its creators.

In taking inspiration from the history of Whispering Pines studio, Ben turns focus away from grander themes of our universe and the afterlife to the “trials and tribulations” of performing.

“The way we thought of it was: there’s the view you see from an audience perspective of a performer, and then there’s the view from the wings, from backstage of them. The light’s hitting them a little differently, and there’s a little more sadness in their complexion. Those are the sort of tableaus we wanted to try to capture: these people’s lives once they leave the stage, the real things they’re going through,” he says.

“Some of the songs are more explicitly, autobiographical– ‘Not Dead Yet’ being one that really was just how I was feeling on a tour one time. After months and months on the road, [I was] looking at myself in the mirror and not recognising who was there. It’s a hard feeling when you’re tired of yourself, because there’s nowhere to go and I’m sure everybody’s been there in one way or another.”

While Schneider has maintained the fictional element of his storytelling in introducing new characters throughout Long Lost, he admits it’s less prominent compared to their second and third albums.

“Strange Trails was out in some sort of fictional or supernatural place, and then, Vide Noir was kind of cosmic as well as very internal. To me, that album is all about how those spaces are equally huge: what’s out there is huge, what’s in [our minds] is just as huge in the other direction,” he describes, hands following the stars and then back to his head.

“And then I guess for Long Lost, it felt like we wanted to put both feet into reality for once, the real world – which is just as complicated and weird as those other places. So yeah, there’s an element of realism in the storytelling on this record that was really just the nature of the type of story we’re trying to tell.”

Not everybody’s putting a record on a platter and listening to it front to back these days, it’s all very piecemeal.

Lyrically, the record is explorative in a new direction – but sonically, Long Lost is once again a champion of change.

Tying records together into a conceptual body of work has always been a priority for the band, Ben tells me (not to my surprise), but this one welcomes a new and particular technique to bind their story: interludes.

“I’ve always loved continuous, seamless albums, and we’ve played with that a little bit on our other records, in terms of one song flowing into to the next,” he smiles.

The concept is sort of: ‘This is what time’s blur does to our memories of things’…

Luckily for them, not only did Lord Huron’s label agree to the short tracks of dialogue, they also agreed to the epic 14-minute instrumental finale which brings Long Lost to a close.

Reminding me strongly of Brian Eno’s work, the track sticks out with its electronic style, something that’s completely new to the band’s sound – or, so I thought: “Essentially, it’s bits you’ve already heard from the record, the songs that have just gone by, stretched out with tape machines.

“The concept is sort of: ‘This is what time’s blur does to our memories of things’,” he goes on, adding that this was one of the few parts of the album to come as a result of last year’s lockdowns: “I was basically sitting around with the strings we had recorded before mixing, you know, bored in my bathrobe and trying to figure out what to do with my time,” he smirks.

Beyond mixing ambient finales in dressing gowns, Ben and his bandmates found a creative solution to the pandemic-induced touring halt. As a way of staying connected to both their fans and their live sets, Alive From Whispering Pines was launched on YouTube in January of this year.

“We didn’t want to just do a traditional livestream,” he reflects.

“I do appreciate the format where it’s just someone in the bedroom playing guitar, I think that’s really cool when they can do it well, but it’s not the thing we do well. And we were in ‘studio mode’ from having just finished recording, so we thought, ‘Let’s do a show from the studio where we can continue to hone our recording skills and our musicianship, while also doing something people want to watch… hopefully’.”

With only the four of them on hand, the series offered an intimate, almost eerie remastering of songs old and new, coming to us as though we were watching a TV broadcast of some old whacky live performance.

As befits the story of Long Lost, this was exactly the point: “It became this idea of a show hosted by one of these ghosts that we feel haunts our studio, Tubbs Tarbell. He’s like the patriarchal figure of Whispering Pines – he’s the owner and proprietor [in our minds]. And so, he hosts the show and introduces everything, and we get to see his story develop with all these other characters which allowed us to play with our old material.”

We wanted this album to sound familiar and nostalgic in a way you can’t quite define.

Upon hopeful probing, Ben admits the concept of a live album inspired by Alive From Whispering Pines was not out of the question, and perhaps, even a creative solution to some previous misfortune: “We’d actually planned on doing a live album compiled from shows we did on our last tour, but unfortunately the tapes were destroyed.”

Undeterred by the weather-ruined recordings, Ben remains hopeful for what lies ahead for the band, eager to get back onstage with their new material. “I’m most excited to start playing the songs from this new record, especially if we can get real strings at some of these shows and all the extra musicians – we could make a really cool live version,” he smiles.

Be it live albums or orchestral arrangements, Ben’s imagination clearly never stops running and Lord Huron’s storybook is unlikely to end with this newest chapter.

With the release date for Long Lost imminent, Ben and the gang have a clear ambition of how they hope it will be received by fans: “We wanted this album to sound familiar and nostalgic in a way you can’t quite define. I know it sounds like a lofty goal,” he laughs, “but we wanted to make it sound like some long-lost classic that fell from outer space and landed in your record store.”

As a fan of both adventure epics and the band itself, I can say with some certainty that this goal has been achieved. If nothing else, Long Lost will become a classic in the legacy of Lord Huron – and lucky for us, their own story appears far from over.

Long Lost is out tomorrow, Friday 21 May 2021 – listen on Spotify and Apple Music to catch up on the albums so far.