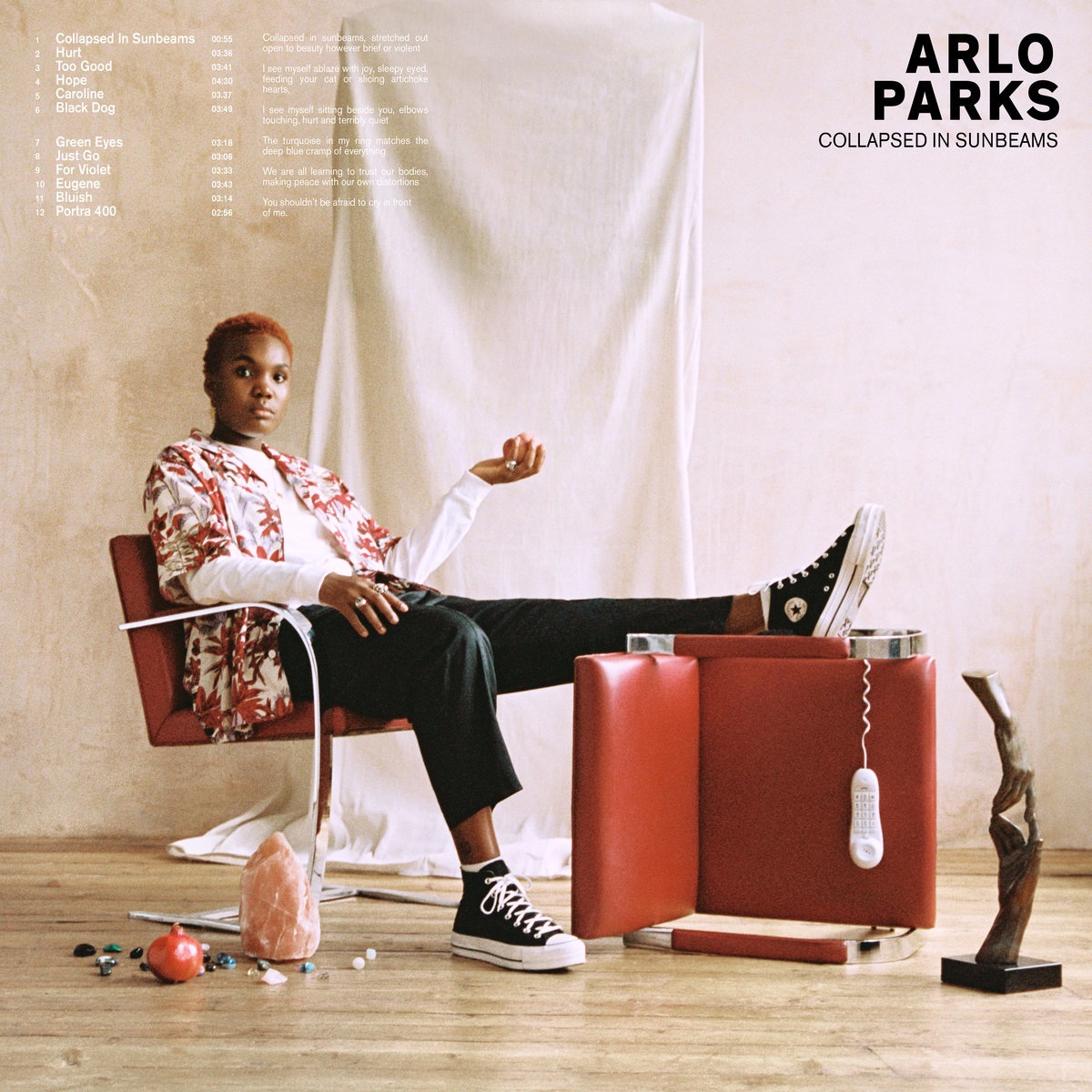 Collapsed in Sunbeams – the debut album by South London songwriter Arlo Parks – starts with a poem. ‘Collapsed in sunbeams…‘ begins the 20-year-old, her delicate voice propped up by a twinkling guitar in the background – ‘stretched out to beauty, however brief and violent‘. A dramatic but nonetheless well-fitting declaration, given what we’re about to hear: a 12-track, 45-minute debut project that captures the zeitgeist of emotional experience in stunning clarity.

Since she first made waves on the UK alternative scene with her single ‘Cola’ in November 2018, Parks has seen her fair share of acclaim, with critics praising her mature and detailed songwriting. Safe to say, the expectations for the album were high, but have been wholly met.

One of the many loveable characteristics of Park’s songwriting is her ability to weave pop culture references so effortlessly into her tracks. Omnipresent throughout the album are references to fellow musicians, (Jai Paul, Robert Smith), writers (Sylvia Plath) and cult TV shows (Twin Peaks). Often, they illuminate a character’s context, like in ‘Hurt’, where the electronic sound of Jai Paul provides comfort to a young boy’s anguish, or in ‘Black Dog’ where enigmatic friend ‘Alice’ crafts her makeup in ode to The Cure lead singer, Robert Smith. Other times, they’re delivered with self-aware doses of wry humour, like on recent single ‘Too Good’: ‘you quote Thom Yorke and lean in for a quick kiss‘.

While these inserts clearly show an artist with her finger on the pulse of popular culture, Collapsed in Sunbeams is anything but a conventional album, given today’s music landscape. Bar the opening and closing numbers, every track exceeds the three-minute mark, demonstrating an artist aiming to hit the reader with long-standing emotional affect, rather than a quick fix.

Instead, Parks carves her own sonic, safe space, outside of conventional trends. Paired down production gives the feel of a studio session at the album’s most intimate – see tracks like ‘Hope’ and ‘Caroline’.

On the one hand, everything feels breezy, honest and heartfelt. Alternatively, this essence doesn’t always warrant the most exciting potential from the songwriter, who instead finds much comfort in her meandering, punctuated stories.

But, perhaps this is only a testament to the endless avenues of creative freedom that lie ahead for Arlo Parks. If Collapsed in Sunbeams shows an artist who has already mastered her sound, then the beauty that lies ahead will be anything but brief.

Haiku Review:
A new talent rising,
Referencing past and present,
And writing the future.

Listen to Arlo Parks on Spotify and Apple Music.